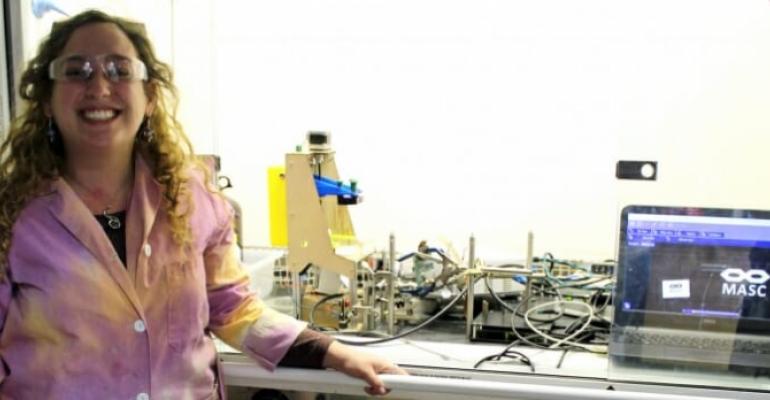 A new light-based technique developed at the University of Wisconsin-Madison allows for more than one material to be printed at a time.

3D printing using more than one material is still a rather complicated process, but now new research has made it easier by using different wavelengths of light. A new technique and 3D printer developed by scientists at University of Wisconsin (UW)–Madison uses patterns of visible and ultraviolet light to direct which of two monomers are polymerized to form a solid material.

These different patterns provide the spatial control necessary to create parts made of multimaterials, said UW–Madison Professor of Chemistry A.J. Boydston, who led the research with his graduate student Johanna Schwartz.

“As amazing as 3D printing is, in many cases it only offers one color with which to paint,” he said. “The field needs a full color palette.”

Applications of the new process could include the creation of personalized medical devices, such as prostheses, or the development of simulated organs and tissues that can be used to train medical students, Boydston said.

Currently except for some experimental technologies, most 3D printers can only produce parts made of one material at a time. But researchers want to do more—that is, print more complex objects—with the technology, which is why they are exploring how to print with multiple materials simultaneously.

The approach of Boydston and Schwartz uses a one-vat, multiple-component approach—similar to a chemist’s one-pot approach when synthesizing molecules, researchers said. They based their technique on the ability of different wavelengths of light to control which starting materials polymerize into different sections of the solid product.

The materials used in the process start as chemicals, called monomers, that eventually polymerize together into a longer string of chemicals, which is how plastic is made.

“This is a shift in how we think about 3D printing with multiple types of materials in one object,” Boydston explained. “This is more of a bottom-up chemist’s approach, from molecules to networks.”

To develop their technology, the team created multiple digital images that, when stacked, produce a 3D design. These images control whether ultraviolet or visible light is used to polymerize the starting materials, they said. This is how they can control the final material and its properties, such as stiffness.

In the process, the researchers simultaneously direct light from two projectors toward a vat of liquid starting materials, where singular layers are built on a platform. After one layer forms, the object is built layer by layer from the bottom up, with light building the next layer and then so on, researchers said. The team published a paper on their work in the journal Nature Communications.

Boydston and Schwartz said the biggest challenge they faced was to optimize the chemistry of the starting materials because they had to consider how the two monomers would behave together in one vat.

They also had to make sure the curing time of the two materials was similar so that the hard and soft materials within each layer finished drying at approximately the same time, Boydston said. Once they achieved this, they could now dictate exactly where each monomer cured within the printed object by using ultraviolet or visible light, he said.

“At this stage, we’ve only accomplished putting hard materials next to soft materials in one step,” Boydston said. “There are many imperfections, but these are exciting new challenges.”

Next, the team aims to address these imperfections as well as explore what other combinations of materials and different light wavelengths can be used in the process, he added. Researchers also hope to build an interdisciplinary team that can increase the impact of wavelength-controlled, multimaterial 3D printing for future applications.