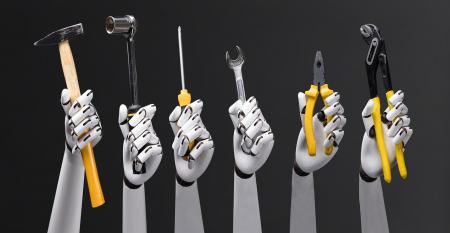 Want a Smarter Robot Application? Give It Eyesight and Networking
Sep 22, 2021
Plant managers are seeking increased intelligence in their robots, from networking to vision systems.

Industry Voices: Want a Great Cobot Worker? Just Count All its Hats
Sep 22, 2021
Eric Potter, general manager at FANUC explains the variety of tasks that can now be completed by cobots.

Need to Improve Surgical Robotics? Focus on the Motion Control
Sep 14, 2021
Many of the advances in surgical robotics are coming from motion control companies.

Funny Fails: Want the Blooper Reel? Boston Dynamics Shows Off its Stumbles
Sep 07, 2021
Boston Dynamics owns up to the fails that are inevitable when you’re creating excellence.

Want to See Nature Teach a Robot? These Underwater Drones Move Like Fish
Sep 07, 2021
Researchers combine multiple disciplines to create a robot that can vary its speed, something difficult to attain in these types of machines.

Want Supplier News? Take a Ride on the Hydraulic Roadshow
Aug 20, 2021
And the weather is rough with storm cookers and drives for harsh environments.

Trust a Knife-Wielding Robot? Your Attitude May Change After Seeing This
Aug 09, 2021
A robot simulator developed by USC and NVIDIA researchers can lead to machines that can accurately slice fruit, vegetables, or...

Got Time for a Quick Laugh? Jokes, Stories, and Quotes About Technology
Aug 04, 2021
Come on in for some fun as we dash through the hilarious and the amusing.

Are Soft Robots That Can Burrow Underground a Benefit or an Alien Horror?
Jul 20, 2021
NASA could potentially use the vine-like machine robots developed by scientists to navigate below the surface of other planets and moons.
Load More