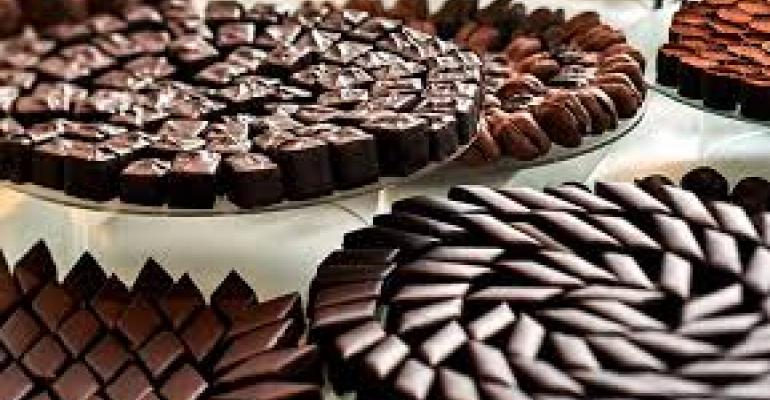 FDM Nylon 12CF thermoplastic contains 35% chopped carbon-fiber and provides the level of strength and tolerance required to replace metal parts. Also, the replacement time for replacing this broken machine part was reduced from one month to one week by using additive manufacturing compared to the traditional handmade metal process.

The solution to the issue wasn’t just a matter of replacing a handmade metal part with the 3D printed part. The goal was to use new material that would result in a superior part that could be produced quickly. “The Chocolate Factory wanted to know if it was possible to use a 3D printed part to replace a metal part. The answer came down to finding the right material,” Carl van de Rijzen, owner of Visual First, told Design News. “At first, we started with simple materials, but they weren’t flexible enough. We went to Stratasys and explained the problem. They came up with the right material.”

Before landing on the right material, Stratasys and Visual First tried a number of solutions. “We sat in the office and talked about it,”  Nadav Sella, head of emerging business at Stratasys, told Design News. "The carbon material was too flexible, and another material wasn’t flexible enough. We came up with the FDM Nylon 12CF thermoplastic as the right material.”

Part Costs and Downtime Are the Big Issues

The Chocolate Factory runs a network of packaging machines, with the company’s daily throughput relying on the smooth operation of a simple, yet crucial, hook-shaped metal part that lifts wrapped bars onto a conveyer belt. A problem occurs when the part malfunctions—typically with such regularity that it necessitates replacement three times a month. As each replacement part is handmade, delivery can take over a month.

If a broken part can shut down production, it seems logical that you should stockpile the parts. It’s not that simple. “The part is too expensive to stockpile. It can’t be machined, and it is too exclusive to be mass produced,” said van de Rijzen.

Finding a superior material would solve a larger production issue than just one failed part. “The breakage or issue with the part is that sometimes there is a malfunction or misfeed in the chocolate bar wrapping line,” said Sella. “Maybe one bar slips on top of the other and the weight creates a situation where there was a lot of force on that part. It’s at a high-speed, so parts begin to break.”

With a part that provides the right flexibility and is less likely to break—and when the breaks are less likely to damage other parts—The Chocolate Factory is looking to use 3D printing for other replacement parts. “With 3D printed molds created on the Fortus 450mc, the company will be able to further accelerate its production processes,” says van de Rijzen. “The most important thing is the production time.”

Following the success of the 3D printed replacement part, The Chocolate Factory is turning to Visual First to solve other design challenges—most notably, to develop a prototype casting mold to test acceptance of its products. Traditionally, this is made from plastic, which is both time-consuming and expensive.