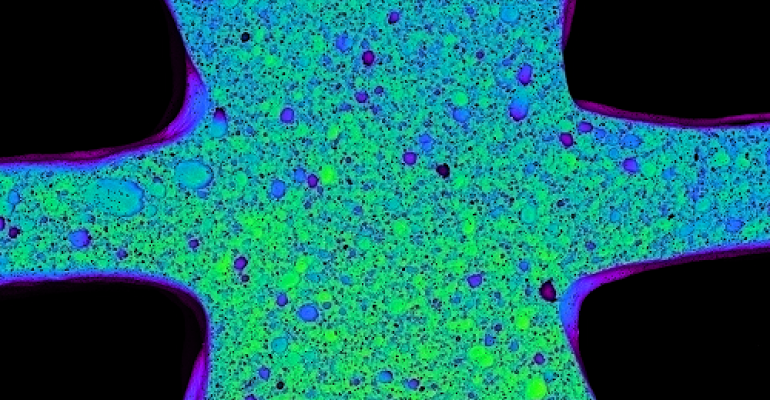 In the researchers’ work, they varied stiffness, but believe other properties like strength, thermal conductivity, or porosity could also be manipulated, as well.

When it comes to design, there is likely no better teacher than nature. While humans have produced an impressive number of gadgets, devices, and systems, most of them are far less efficient and require far more in the way of inputs than nature’s designs do. Even the simplest organisms have the ability to grow and to do so, they must rely on readily available nutrients in their environment. This often boils down to one ingredient, from which a dazzling array of properties can be produced, often by making changes to structure at a very small scale.

Until recently, humans have been unable to do this and have therefore relied on a wide variety of materials, from which to obtain the required properties. This can result in products with materials sourced from literally around the world, an expensive proposition, to say the least.

The advent of 3D printing has changed all that, allowing for the possibility of producing objects, with continuously variable properties from a single feedstock. Beyond that, researchers are now finding that by combining materials development and material placement, you can combine properties in a variety of ways. A lot of work has been done on this with fibers and fiber reinforced materials.

Comparatively little efforts have focused on porous materials or foams. However, researchers at the Harvard John A. Paulson School of Engineering and Applied Sciences (SEAS), the Wyss Institute for Biologically Inspired Engineering at Harvard, and MIT, recently extended this concept to foams. They developed a new method to 3D print bioinspired ceramic materials with independently tunable macro-and microscale porosity using a ceramic foam ink.

“We wanted to know if we could make cellular structures with multiple length scales in a scalable way,” said Joseph Muth, lead author of the paper entitled, Architected Cellular Ceramics with Tailored Stiffness via Direct Foam Writing. Prior work up to this point has primarily used a single length that had to be built up from the smallest scale, which is very time-consuming. “If you can demonstrate control of the cellular microstructure with ink development, letting the material assemble itself into microscale architectures, then you can pattern at much larger scales and get the small length scale for free,” he said.

What this allows is for variable properties to be produced within a part as it is made from a single material. In demonstrating that capability, the team wanted to know, “what kind of property space can we navigate?”

In their work, they varied stiffness, but Muth said, other properties like strength, thermal conductivity, or porosity could also be manipulated in this way.

In addition to varying the properties through material placement, they can also change the properties of the foam itself to achieve further tunability by adjusting the microstructure of the foam through material processing. Complex parts with variable properties could then be made using multiple nozzles placing different foams in different locations. This could also be done, in principle, with a single nozzle, by making the foam on the fly, with whatever properties might be needed in the next section to be printed in a continuously variable manner.

This provides three degrees of freedom, that can be used to establish the characteristics of a given region, those being: the structure of the foam, the printed unit cell size and shape, and the stiffness (or conductivity or porosity) of the foam being applied. Each of these knobs significantly affects the property of interest, and when employed together may be used to significantly expand the range of attainable material performance.

After the material is laid down, it is solidified by means of a high-temperature sintering process, (approximately 1500˚C) which fuses together the ceramic particles. Muth was careful to point out that while the approach was demonstrated with ceramics, there is no reason why the same approach wouldn’t work with polymers or metals, either.

The foam is produced through a particle stabilization process.  It’s similar to making a meringue. The surface energy of the particles is tuned so that they want to spontaneously attach to a liquid-air interface. Once air is introduced via a whisk, the mixture turns into a foam. This is accomplished by attaching certain molecules to the particles to achieve the desired degree of hydrophobicity.

The length scale of the elements produced are as follows: the particles start at~100 nanometers, the bubbles are ~10-100 microns. Filaments come out of the nozzle at ~0.5-1 mm, and the structures are on the order of ~10-100mm.