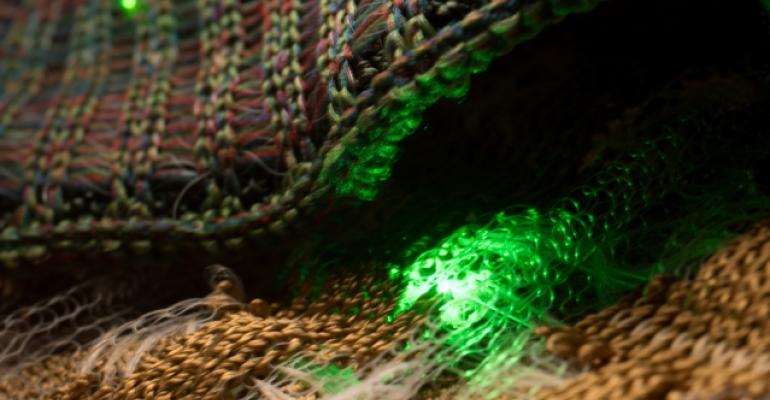 A new semiconductor embedded cloth is the missing link in providing a new generation of smart clothing for biomedical, military, and communications applications.

Researchers have made big strides in the last several years to develop textiles that include sensors and other electronic components to support the design of smart clothing. Now, a team at MIT—in collaboration with other scientists—has made a key breakthrough in advancing these technologies with the development of cloth embedded with semiconductors. The researchers believe that their findings could accelerate the development of wearable technology.

Specifically, researchers from both academia and the private sector have embedded high-speed optoelectronic semiconductor devices within fibers that were then turned into soft, washable fabrics that can serve as high-tech communication systems. The company Inman Mills in South Carolina fabricated the cloth, producing a kind of “soft hardware” that people can wear, researchers said in an MIT news release.

“We are anticipating the emergence of a ‘Moore’s Law’ analog in fibers in the years ahead,” said Yoel Fink, MIT professor of materials science and electrical engineering. The research was a collaboration between MIT, Inman Mills, industry group Advanced Functional Fabrics of America (AFFOA), Lincoln Laboratory, and EPFL in Lausanne, Switzerland. “It is already allowing us to expand the fundamental capabilities of fabrics to encompass communications, lighting, physiological monitoring, and more,” said Fink in the MIT release.

Fink, who also is president of AFFOA, said that the fabrics are the missing link in the true development of wearable technology and will usher in an era where clothing brings “value-added services and will no longer just be selected for aesthetics and comfort.”

In the past, researchers developed optical fibers by making a cylindrical object called a “preform”—basically, a scaled-up model of the fiber—and then heating it. They then pulled the softened material downward under tension and collected the fiber that resulted on a spool. What researchers did to produce the new fibers was to make two key additions to the preform: light-emitting semiconductor diodes the size of a grain of sand, and a pair of copper wires a fraction of a hair’s width.

Heating the preform in a furnace during the fiber-drawing process partially liquefied it, forming a long fiber with the diodes lined up along its center and connected by the copper wires. These diodes—both LED and photo-sensing—are solid components made using standard microchip technology. They maintain their dimensions while everything shrinks around them in the drawing process, researchers said.

“This approach adds a new insight into the process of making fibers,” said Michael Rein, a former MIT graduate student who developed the concept that led to the new process. “Instead of drawing the material all together in a liquid state, we mixed in devices in particulate form, together with thin metal wires.”

Researchers laundered the fabrics woven from the resulting fibers 10 times to demonstrate that they are suited to the fabrication of clothing, they said. They also tested its functionality in water, placing some of the fibers with photo-sensing capability inside a fish tank in which they survived for weeks.

The team published a paper on its work in the journal Nature. The researchers aim to bring the first commercial products incorporating this technology to market as early as next year, Fink said, adding that the lab-to-market development speed has been made possible by collaborating with the AFFOA.

The first products will be specialized to focus on communications and safety, he said. “It's going to be the first fabric communication system,” Fink said. “We are right now in the process of transitioning the technology to domestic manufacturers and industry at an unprecedented speed and scale.”

Other applications for the fabric include military use, which the Department of Defense already is exploring, researchers said. It also is well-suited for biomedical devices that can use the fibers to develop wearable technology to measure pulse or blood-oxygen levels or a smart bandage that can monitor healing.