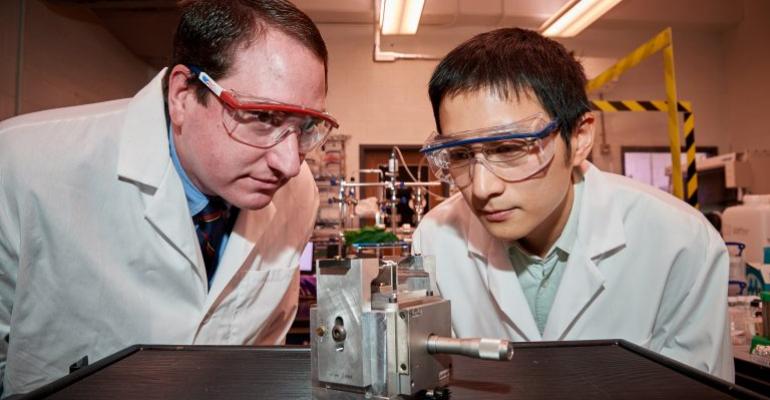 Researchers have improved the performance of atomically thin semiconductor material by applying strain to it.

Researchers have discovered that they can improve the performance of an atomically thin semiconductor material by stretching it—a development that bodes well for engineers developing the next generation of flexible electronic and optical devices.

Scientists at the University of Connecticut’s Institute of Materials Science worked with a six-atom-thick bilayer of a material called tungsten diselenide. They said the material showed a 100-fold increase in photoluminescence—an unexpected level for the material—when it was subjected to strain.

This finding in and of itself is significant and may lead to using the material for next-generation flexible electronics and optronics. What’s even more interesting is the technique used by the team to discover the effect of strain on the material, Michael Pettes, assistant professor of mechanical engineering, told Design News.

“Strain engineering has only been discussed as a possible solution to increasing the performance of 2D materials. But experimentally, it has been prohibitive to confirm the many differing theories related to whether elastic strain will benefit device performance or not,” he explained. “Experimental techniques involving strain-coupled transport are often limited in their ability to contribute to real applications, since the strain experienced by the material of interest is not known and is often speculated as being incorrect.”

Materials science and electronics researchers are trying to improve the performance of atomically thin materials for electronics. This would pave the way for the smaller and smaller components that electronic design is demanding. Currently, they are not comparable to what’s available using silicon, Pettes said.

What his team did that’s unique is to provide a new methodology for conducting strain-dependent measurements on thin materials. The team also provided an argument to adopt a new model to standardize experimental studies.

“This is important, as strain is predicted to offer orders of magnitude changes in many important properties across many different scientific fields from catalysis to optics, and lack of confidence in experimental results can mislead or prevent advances in materials design efforts needed for commercialization of new technologies,” Pettes told us.

Pettes and Wei Wu, a Ph.D. student in his lab, successfully measured the influence of strain on a single crystalline bilayer of tungsten diselenide—first by encapsulating it in a fine layer of acrylic glass and then heating it in an argon gas chamber.

This thermal processing strengthened the material’s adhesion to a polymer substrate. This allowed them to nearly perfectly transfer applied strain, Pettes said, something that had been difficult to achieve in prior experiments.

“We needed a way to test this effect, so we designed a custom four-point bending instrument that would fit underneath a micro-Raman spectrometer at the Harvard Center for Nanoscale Systems,” he explained. “Our new material and our new apparatus allowed us to discover a two order of magnitude increase in photoluminescence intensity from a material that shouldn’t photoluminesce, all due to strain,” he added.

Ultimately, researchers found that applying increasing levels of strain to the material altered its flow of electrons, which was reflected by the increased intensity in photoluminescence.

Going forward, researchers plan to continue to test the effect of strain on the material to discover whether localized strain effects can help overcome the main obstructions to progress for 2D quantum materials, Pettes said.

“This is allowing us create structures that bring advantages in spectral stability and offer an order-of-magnitude increase in excitonic lifetime compared with free and intrinsic defect-bound exciton recombination rates,” he explained. “Most promising, we are observing single photon emission from the locally strained sites.”