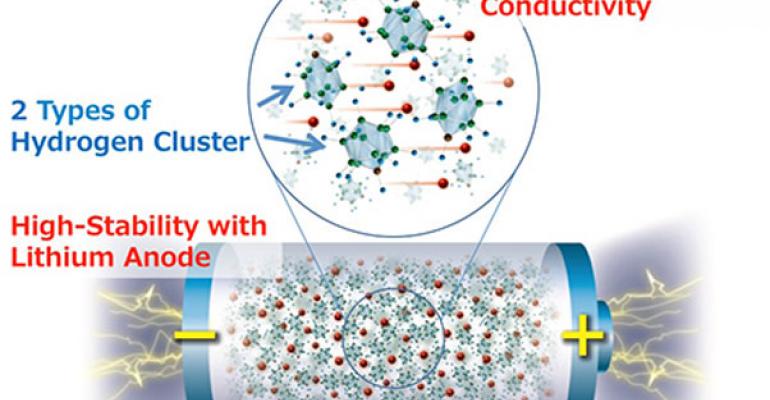 Using a complex hydride with superionic conductivity in a solid electrolyte may move the needle forward in the development of solid-state lithium batteries.

As regular Design News readers will know, the hottest topic in battery technology these days is solid-state lithium batteries. It seems every week a new breakthrough or innovation is announced that will make this promising new technology possible. At DN, we feel obligated to report on much of this research—not because we want to add to the hype, but because solid-state lithium batteries hold so much promise to dramatically improve the lithium ion batteries that are commercially available.

As a case in point, researchers at Tohoku University in Japan have announced, via a news release, a new solid electrolyte that exhibits high ionic conductivity and high stability against the lithium metal that is used as the anode in solid-state lithium batteries. Lithium metal can provide up to three times the charge capacity when compared to the graphite anode used in lithium ion batteries. But when a metallic lithium anode is used with a typical liquid electrolyte, spikey dendritic crystals of lithium can form on the metal surface. These dendrites can eventually short out the battery cell, and can potentially cause a fire.

A solid electrolyte, when used with a metallic lithium anode, has been shown to limit the growth of the dendritic crystals. But, the use of solid and semi-solid electrolytes has been limited by the high lithium ion transfer resistance, caused mainly by the instability of the solid electrolyte against lithium metal. This can cause unwanted side-reactions at the interface between the lithium metal and the electrolyte.

That’s where the new research from Tohoku University comes in. In the news release, the researchers say, “…the new material, achieved by designing structures of hydrogen clusters (complex anions), shows markedly high stability against lithium metal, which would make it the ultimate anode material for all-solid-state batteries.”

Although the research is in the early stages, it does represent yet another possibility for the eventual adoption of lithium metal anodes and solid state electrolytes. "We expect that this development will not only inspire future efforts to find lithium superionic conductors based on complex hydrides, but also open up a new trend in the field of solid electrolyte materials that may lead to the development of high-energy-density electrochemical devices," said Kim.