A Rainbow of Colors with New 3D-Printing Method 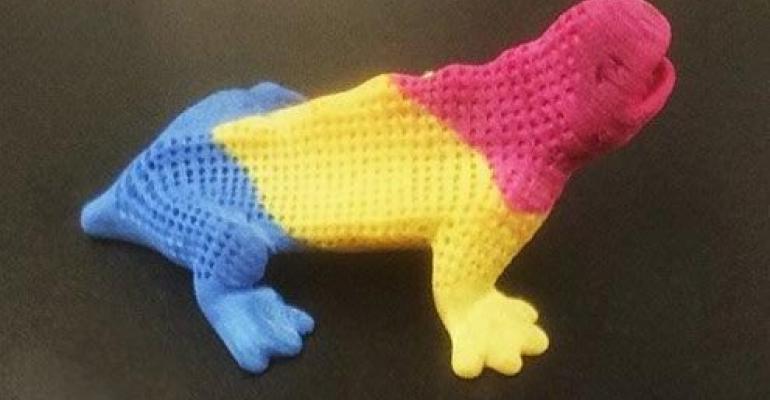 Researchers in Spain have found a way to 3D print all the colors of the rainbow more efficiently and with better results than current technologies.

A team of engineers from the Barcelona Institute of Science and Technology’s Institute of Photonic Sciences has used selective laser sintering (SLS) printers to achieve their results. Essentially, they added compounds called photosensitizers to the polymer powders used in the process to reduce energy requirements and improve the effectiveness of the printing.

This method solves some current challenges in 3D printing multiple colors, which can be done today using various methods that are either slow, result in poor mechanical properties, or both, Alexander Powell, a post-doctoral researcher at the Institute of Photonic Sciences, told Design News.

The current methods are good “for making pretty models, but not so good for making multiple copies of a functional part,” he told us. “What is difficult, and is currently lacking, is a method for printing robust parts, in beautiful bright colors, at high speeds.” What the team has done to achieve this is to find “a material that allows fast printing of reliable parts, while retaining complete control over the coloration of these prints,” Powell said.

Powder sintering is a process in which a bed of polymer powder is illuminated via an infrared light source, which heats the powder and selectively melts or sinters the powder particles together to form a 2D layer of an object. To build the 3D shape, more powder is added. The process repeats until the desired shape is formed.

To speed up printing, researchers add highly absorbent materials to the powder. They heat and melt much faster when they are illuminated, Powell said. Typically, though, these materials “tend to be very black, so while you can now make very strong parts very quickly, the color scale is limited to black or gray,” he said.

To solve this problem, researchers have designed gold nanorods that absorb very strongly in the invisible, infrared part of the spectrum, but hardly at all in the visible part. The rods were coated with silica and then mixed with polyamide powders to print 3D objects.

“When you shine an infrared light on it, it still heats up a lot—more than enough to melt the powder particles to form a 3D object,” he explained. “But it does not affect the color of your material or your print. Therefore, the part is left white and you can easily add colored inks or dyes during the printing process to control the color of the object as it is printed.” Researchers published a paper on their work in the journal Nano Letters. Gerasimos Konstantatos and Romain Quidant at the Institute of Photonic Sciences led the research.

The process is highly scalable and uses materials that are cost effective for large-scale production, Powell stated. However, though there are “no major roadblocks” to scaling the technology, he said that it will require some work to get the particle production up to the high volumes needed and to integrate these particles with industrial printers. “This will enable the fast printing of usable parts with complete control over the aesthetic properties—something that has not been achieved previously,” Powell said.  He said commercialization of the process also would be a key win for all researchers interested in these types of technologies.

“This is an important step for the scientific community also, as while there has been great interest in resonant nanoparticles for a couple of decades now, only a handful of applications have achieved a commercial breakthrough,” Powell said. The researchers already have filed several patent applications related to the new technology. They plan to continue their work by teaming with partners to integrate it into a larger-scale 3D printing set-up as they eye future commercialization.