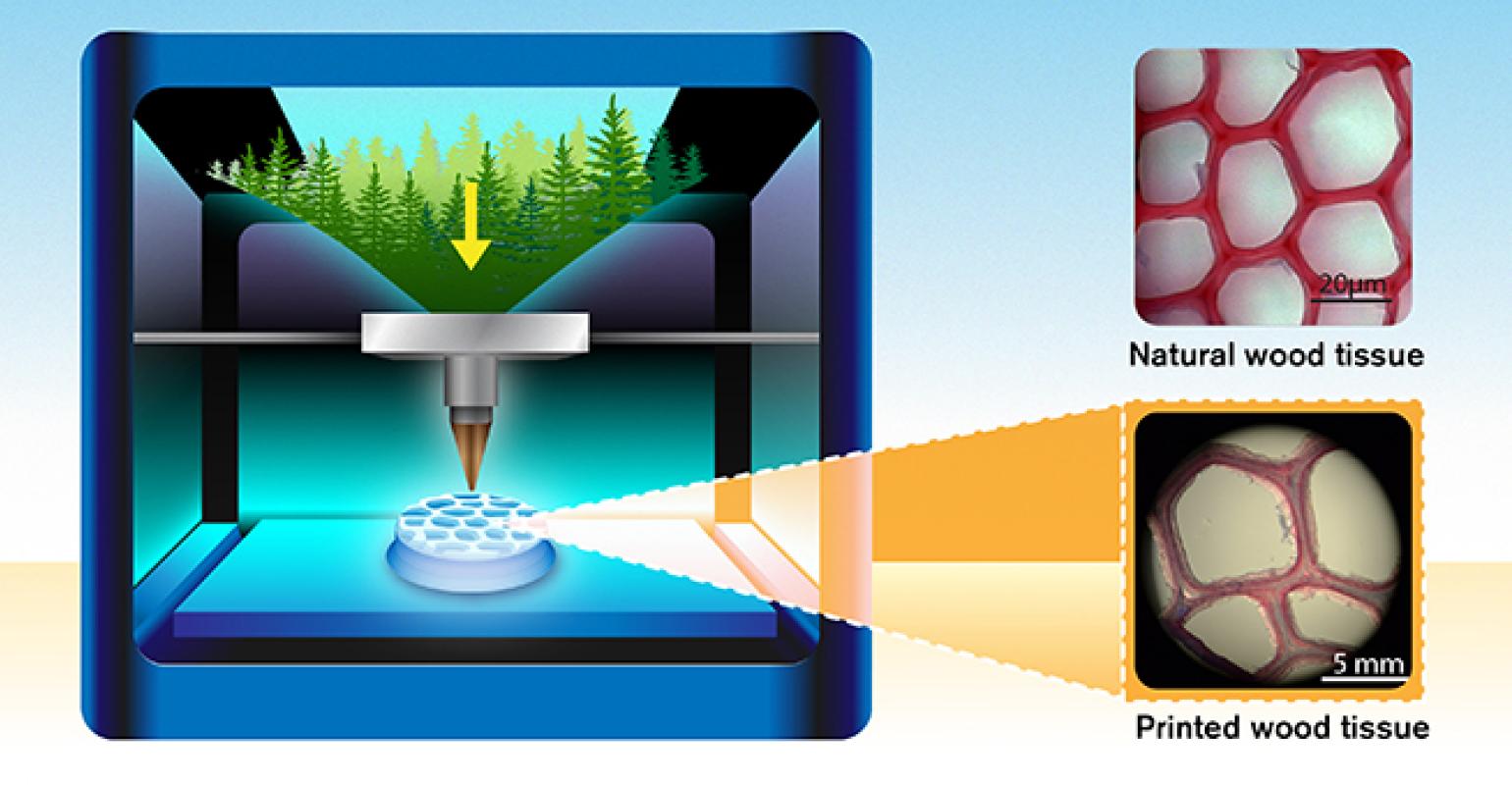 Researchers have developed a wood-based ink for 3D printing that maintains the cellular structure of the wood, paving the way for myriad new products.

3D printing with materials like polymers and metal are fairly standard these days, but natural materials are still largely unexplored territory for this type of fabrication method.

Until now, thanks to researchers at Chalmers University of Technology in Sweden, where a team has successfully printed using a wood-based ink in a way that mimics the ultrastructure of the natural material.

By creating an ink that emulates this natural cellular architecture, researchers-- led Paul Gatenholm, a professor in Chalmers’ Wallenberg Wood Science Center--have paved the way for the production of eco-friendly products derived from trees, including clothes, packaging, furniture, and even healthcare and personal-care products, he said.

“Wood ultrastructure includes several things: porosity, honeycomb structure, anisotropy, fibrils orientation, and angle and composition,” Gatenholm told Design News. “We have mimicked all of these elements and showed that we can, with 3D printing and ‘wood ink,’ create wood-like structures.”

Wood typically has had limitations when it comes to processing, mainly because of its inherent inflexibility and inability to be melted or easily reshaped. Because of this, when it’s used to make other products—such as paper or textiles—the process must destroy its underlying ultrastructure in order to successfully turn it into something else.

The process Gatenholm and his team developed keep that structure, allowing wood to remain, well, wood--while also being turned into something else--through the entire printing process, researchers said.

“We can print any green product with wood-derived materials,” Gatenholm told Design News. “This has not been done before.”

The Chalmers team in previous work already had converted wood pulp into a nanocellulose gel that could be used for 3D printing. In their current research, they take this a major step further—they interpreted and digitized the genetic code of wood so it can give instructions to the printer, researchers said.

This achievement means that researchers can precisely control the arrangement of the cellulose nanofibrils during the printing process to replicate the wood’s ultrastructure, managing the orientation and shape of natural wood to take advantage of these properties instead of stifle them, Gatenholm said.

“This is a breakthrough in manufacturing technology,” he said in a press statement. “It allows us to move beyond the limits of nature, to create new sustainable, green products. It means that those products which today are already forest-based can now be 3D printed, in a much shorter time.”

Further, using the process, engineers also can replace 3D-printed products typically made with metal and plastic with those made in wood, which is a renewable and sustainable alternative, Gatenholm added.

Researchers published a paper on their work in the journal Applied Materials Today.

Researchers envision a varied line of new products that can be custom designed using the new ink and process. To demonstrate innovations from their work, the team already developed a prototype for a novel packaging concept.

They printed honeycomb structures, with chambers in between the printed walls in which they encapsulated solid particles. Because cellulose has shown to block oxygen, researchers envision this prototype as an airtight packaging for pharmaceuticals or foods, Gatenholm said.

“I think the most important application will be tailor-made packaging on demand,” he told Design News.

Other prototype products researchers developed to demonstrate the research include healthcare products and clothing. They also believe the wood-based ink and process can be helpful for developing new products in space, which could be a good testing ground to prove the technology further, Gatenholm said.