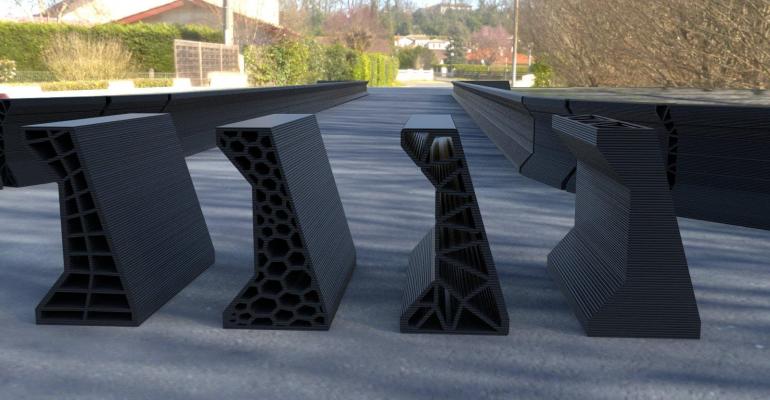 NASA and Autodesk have partnered to experiment with new materials and 3D printing to develop human habitats for potential settlement on Mars.

As far as we know, humans aren’t living on other planets like Mars—yet. That doesn’t mean they won't in the future, which is why NASA and Autodesk are experimenting with 3D printing to build habitats for when this happens.

The two companies have teamed up to experiment with how to 3D-print human-habitable structures made of lightweight materials here on Earth, which can be easily hauled into space and reassembled on other planets, according to a blog post by Raymond Deplazes, Autodesk group manager of manufacturing and research PR, on the Autodesk website.

Specifically, the two companies combined technology and expertise to use a process called robotic extrusion and a composite material made up of recycled plastic and a loose sediment called regolith. Regolith comprises soil, dust, broken rock, etc. It can be widely found on Earth, other planets, the moon, and even asteroids. This material and process have the potential to improve building construction on Earth as well as for future space settlements, said Abhishek Trivedi, consulting business development executive at Autodesk, to Design News.

“We are working on autonomous robotic construction that can be used for infrastructure projects on earth,” he explained. “The goal of the work has been to develop the right material, hardware, and control software for remote-controlled construction. NASA Swamp Works at Kennedy Space Center is our partner in that effort. Their mandate is to figure out a way to build habitats on other planets,” he added.

One aspect of the work is material exploration. So far, researchers have found that regolith is versatile in terms of what can be built with it, as well as in how it solves problems with current materials typically used in construction, Trivedi said.

“The material is made of high basalt soil and polymer,” he explained. “That means it takes away the problem that comes with usage of water with Portland cement concrete, such as curing requirements, shrinkage, etc. Also, the material can be heated to just the right viscosity to enable complex, free-form design. That means you can create complex overhangs, domes, projection, roofing, etc. without needing any scaffold or supporting structure.”

For its part, NASA has been a pioneer in 3D printing. The agency has already done significant experiments with 3D printing in space with lightweight materials as part of its preparation for if and when humans make settlement on Mars or planets other than Earth, as well as for other purposes.

Among its 3D printing endeavors include the invention of 3D-printing multiple metals in a single end-part, thanks to a collaboration between NASA's Jet Propulsion Laboratory (JPL) and Caltech. NASA also has achieved 3D-printed rocket parts and fabricated other advanced parts using 3D printing for deep-space missions.

The space agency even sponsored a "From Waste to Space" competition to design and build 3D-printed habitats for deep space exploration, including NASA's planned manned journey to Mars. Companies currently are bidding to partner with NASA for that mission.

In its current work with Autodesk, NASA printed what’s called a “Jersey barrier” out of the composite material—an object that is typically made of concrete. Jersey barriers are most often seen separating lanes of traffic near road construction zones. For this purpose, they must be tough and durable, which is also a goal that NASA engineers have for human space dwellings.

Based on NASA specifications, Autodesk’s Advanced Consulting team designed the barrier using company tools, such as Fusion 350 and PowerMill, to comply with structural as well as robotic-extrusion requirements, according to the blog post. They also managed to achieve significant weight reduction in their design.

Autodesk also developed the software to control the industrial robot arm, which was fitted with a specialized end effector designed by NASA. This enabled free-form additive manufacturing without the need for outside support or scaffolding.

NASA and Autodesk engineers said they were pleased with the results of the finished project, finding that the regolith/plastic composite has proven to be strong, dependable, and relatively lightweight, according to the post. The companies aim to conduct further experiments to scale the materials and process to build human habitats not only for Mars, but also right here on Earth, Trivedi said.

“I think we have the right hardware, software, and material at this stage, and we have proven ourselves on a smaller scale,” he said. “Next stage is to scale everything up. We are looking at a large infrastructure project with NASA. Internally, we would like to build a two-story house and compare the cost against traditional construction techniques.”