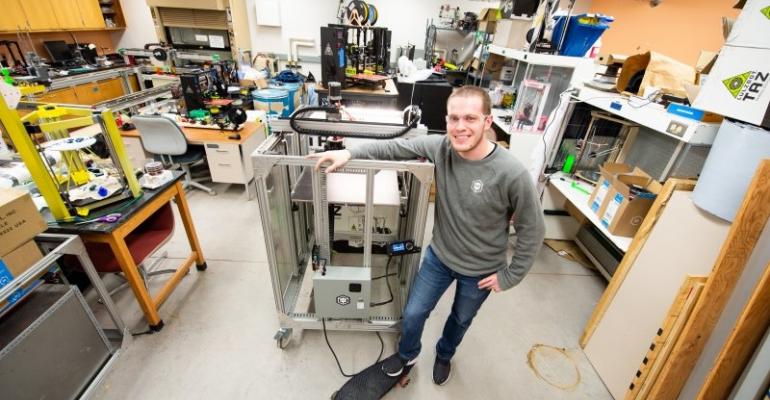 A 3D printer developed by researchers at Michigan Tech and re:3D turns recycled plastic into high-performance sporting equipment such as kayak paddles and skateboards.

Researchers in Michigan have merged environmental-friendly production and 3D printing to create a high-performance 3D printer that can develop sporting goods from recycled plastic.

“re:3D has been manufacturing the Gigabot—a low-cost high-quality large-format 3D printer that uses fused filament,” he explained to Design News. “Unfortunately, filament is marked up about 10 times over the cost of plastic feedstock. This makes 3-D printing large objects relatively expensive—and Gigabot users are used to using a lot of plastic.”

Gigabot X—a modified version of the machine invented by Pearce and his team-- allows for the use of much less expensive pellets of plastic, as well as to use recycled materials to produce new objects, he told us.

“We took it one step further and adapted the machine and found optimal settings for a wide range of waste polymers by directly recycling them,” Pearce said. The team also released free and open-source designs of the printer and products fabricated using it to help promote widespread use of the technology.

Gigabot X is not meant for home use; it’s an industrial-sized machine aimed at developing high-performance sporting-goods products, which have been challenging—if not impossible—to make in commercial-worthy versions using existing technology.

“You need to design the item specifically for 3D printing to get the best outcome,” Pearce said, explaining one of the key challenges to fabricating these types of products in this way. “In some cases we did post processing on the print to get the wanted form—as in curving the end of the snow shoes.”

To achieve their goals, Pearce and his team outfitted Gigabot X using an extruder system closely related to an industrial thermoplastic extruder, he said. To fit the printer, they scaled it down and mounted it as an extruder head on the Gigabot.

“The extrusion screw was designed with an increasing diameter down the length of the screw with a ratio of 2.5:1 from the start to the end,” Pearce explained to Design News. “The hopper was 3D-printed to allow for ease of modification and optimization of the design during testing. The system has two heating zones, one to melt the plastic shards/regrind/pellets, and the second one to have a controlled extrusion.”

The idea to use recycled plastic in the printer served two purposes, Pearce said. With all of the damage plastic pollution is causing to the global environment, it is more environmentally friendly to use recycled materials, he said.

There is a practical consideration, too, Pearce said. “It also radically reduces the costs,” he said. 3D-printing filament costs $20-$50 a kilogram, while pellets cost $1-$5 a kilogram and shredded waste plastic that people can make themselves is nearly free, Pearce said.

While the printer itself is not cheap at a cost of about $18,500, the potential returns from being able to 3D-print products such as a skateboard deck, double-bladed kayak paddles, and snowshoes—all of which researchers demonstrated--will have its rewards for manufacturers, Pearce said.

“The Gigabot X enables users to make environmentally friendly products for a tiny fraction of equivalent commercial goods,” he said.

Pearce and his team plan are moving ahead with their research by using the Gigabot X to manufacture composites and a wider array of polymers to further expand the materials options for low-cost, large area 3D printing, he said.