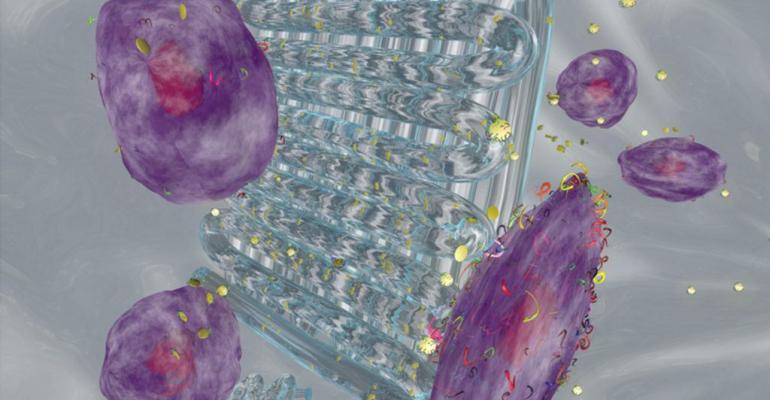 One of the fastest-growing areas of 3D printing is in the bioprinting realm, where researchers have been developing numerous technologies to advance development of artificial organs and other body parts, as well as to deliver medications and therapies inside the body.

To the latter end, a team of researchers at Texas A&M University has developed hydrogel bioinks that can print therapeutics—specifically, proteins that can drive cellular fate and functions—in 3D for innovations in regenerative medicine.

Researchers in the lab of Assistant Professor Akhilesh Gaharwar in the university’s Department of Biomedical Engineering developed bioinks that can determine the location and expand the lifetime of growth factors, or protein molecules made by the body that typically act as signaling molecules between cells, he told Design News.

“These growth factors have short half life and become inactive within three-four hours in physiological conditions due to degradation of protein structure,” he explained. “We have developed an approach to preserve the bioactivity of these growth factors for prolong duration—more than four weeks—and are able to sequester them in specific locations via formation of our bioink.”

The study is one of the first to show that researchers can preserve the activity of growth factors and can direct cellular migration in a 3D-printed structure, Gaharwar said.

Indeed, 3D bioprinting is emerging as a promising method to fabricate cell-based structures to help repair and protect tissue inside of the human body. Until now, it has been difficult to control cellular functions, which is where the growth factors come into play.

Specifically, Gaharwar and his team nanoengineered a bioink—synthesized from a hydrolytically degradable polymer and 2D nanosilicates—that’s loaded with therapeutic proteins to direct cell function in a 3D-printed construct, he said.

“Due to the high surface area and charged characteristic of 2D nanosilicates, protein therapeutics can be sequestered in a 3D-printing structure for prolonged duration,” Gaharwar explained.

In tests, researchers demonstrated that sustained release of pro-angiogenic therapeutics from the 3D-printed structure promoted rapid migration of a human endothelial umbilical vein cell, he said. “This approach to design biologically active inks to control and direct cell behavior can be used to engineer 3D complex tissue structure for regenerative medicine, Gaharwar said.

Another benefit of the new technology—which is based on a nanoclay platform developed by Gaharwar—is that it has shear-thinning properties that allow for the material to be injected, quickly stop flowing, and then cure to stay in place. This behavior is highly desirable for 3D-bioprinting applications, researchers said. The team published a paper on their work in the journal Advanced Healthcare Materials.

Gaharwar said the research can pave the way for designing anatomical-sized vascularized tissue scaffolds for tissue repair or organ replacement. The team plans to continue its work to engineer these scaffolds for the formation of new and healthy human tissue, he said.

“This type of vascularized functional tissue can be used for tissue- and organ- replacement approaches in future,” Gaharwar said.