HomeMaterials3D-Printed Liquid Device Creates Reactions On Demand
Recent
Materials
Mercedes-Benz Sustaineer Concept Electric Van Scrubs the Air While it Drives
Oct 28, 2021
Spooky Halloween Tech Is Here. Just Look at These Doozies
Oct 27, 2021
Halloween? What a Perfect Time to Think About Generating Electricity From Blood!
Oct 27, 2021
Ghosts of Medtech: What Ever Happened to These 7 Medical Devices?
Oct 27, 2021
POLL
How to Survive a Zombie Apocalypse
Oct 27, 2021
America's Supply Chain Crisis by the Numbers
Oct 27, 2021
Want Scary Stuff for Halloween? Check out the Tech for 2021
Oct 27, 2021
How Apple Influenced Medical Packaging
Oct 27, 2021 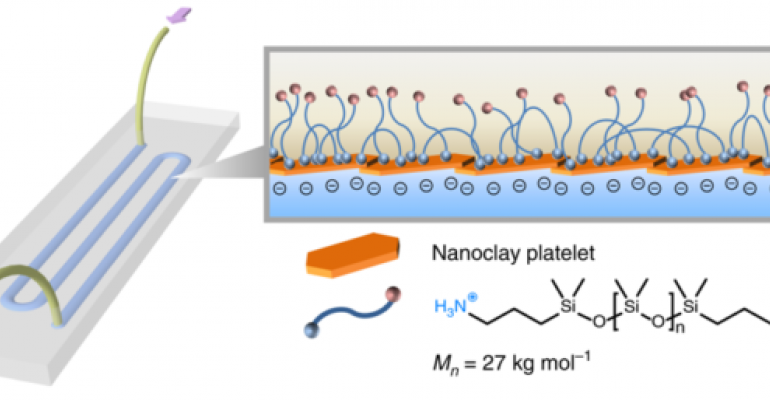 A team at the Department of Energy’s Berkeley Lab has created the first all-liquid lab-on-a-chip using 3D printing.

The US Department of Energy (DoE) has made a breakthrough in 3D-printing liquid materials with the fabrication of an all-liquid device that can be configured repeatedly to serve different purposes with the click of a button.

Researchers at DOE’s Lawrence Berkeley National Laboratory (Berkeley Lab) developed the device, which can be programmed to act as an artificial circulatory system that separates molecules flowing through the channel, automatically removing unwanted byproducts.

“What we demonstrated is remarkable,” said Brett Helms, a staff scientist in Berkeley Lab’s Materials Sciences Division and Molecular Foundry who led the research. “Our 3D-printed device can be programmed to carry out multistep, complex chemical reactions on demand.”

What he said is even more impressive is that researchers can reconfigure the platform to “efficiently and precisely combine molecules” to create specific products, such as organic battery materials and other chemical combinations.

To create the device, researchers printed two liquids—one containing nanoscale clay particles, another containing polymer particles—onto a glass substrate. The liquids came together and at their interface, within milliseconds, they formed a very thin channel about 1 millimeter in diameter, researchers said.

Once the channels are formed, researchers can place catalysts in different channels of the device and print 3D-print bridges between channels, connecting them so that a chemical flowing through them encounters catalysts in a specific order, they said. This sets off a series of cascading chemical reactions that can create specific chemical compounds on depending on the purpose, Helms said.

Further, if this process is computer-controlled, automation can take over tasks such as catalyst placement, building liquid bridges within the device, and running reaction sequences needed to make molecules, said Thomas Russell, a Berkeley Lab researcher from the University of Massachusetts at Amherst.

Liquid 3D-printing is a nascent discipline, and researchers at Berkeley Lab have been working for some time to fabricate all-liquid materials with a 3D printer.

Last year, Helms and Russell pioneered a novel technique for printing various liquid structures—such as droplets and swirling threads of liquid—within another liquid. This inspired them to “brainstorm on how we could use liquid printing to fabricate a functioning device,” Helms said, which was the foundation of the current work. Researchers published their findings in the journal Nature Communications.

Applications for the device are potentially endless, “only limited by the imagination of the researcher,” Helms said.

“Autonomous synthesis is an emerging area of interest in the chemistry and materials communities, and our technique for 3D-printing devices for all-liquid flow chemistry could help to play an important role in establishing the field,” he said.

For their next steps, researchers aim to use conductive nanoparticles to electrify the walls of the devices to explore a wider range of reactions. Helms believes that eventually, researchers can create all-liquid circuitry, fuel cells, and even batteries using the technique.

“It’s been really exciting for our team to combine fluidics and flow chemistry in a way that is both user-friendly and user-programmable,” he said.

Berkeley Lab is making the new technology available for licensing and collaboration, and interested parties can e-mail them for more information.