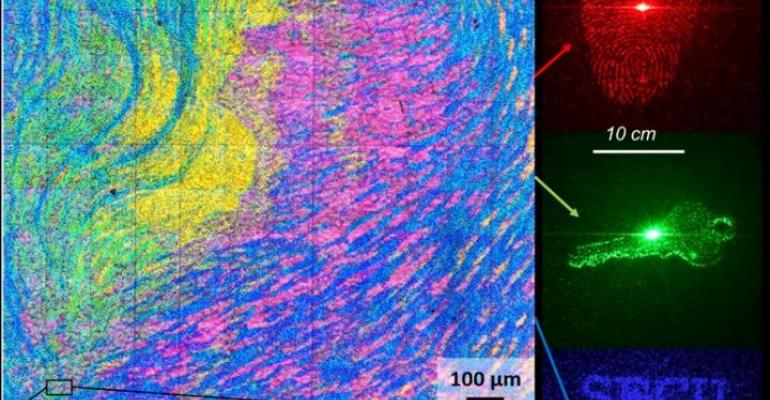 Researchers from the Singapore University of Technology and Design (SUTD) have invented a new type of anti-counterfeiting optical device called “holographic color prints.” The device appears as typical color print under white light but can project up to three different images onto a screen when lit up with laser pointers, researchers said in a news release.

Counterfeiting of banknotes and various identity cards like passports is a huge problem across the world, with an industry that’s projected to reach more than US$357 billion globally by 2026, a report by Credence Research has found.

The financial losses and general confusion and distress counterfeited money, passports, and other documents can cause is impetus for constant research into how to better protect authenticate banknotes and the like, said Joel Yang, an associate professor at SUTD who led the research.

"The relationship of holograms in combating counterfeiting is analogous to antibiotics against infections,” he said. “Every so often, new technology is needed to deter counterfeiters as the old fashioned holograms become easier to copy.”

Typically, current anti-counterfeiting products used today are based on holograms, which are used on numerous items including electronic device package boxes, medicine bottles, and the surfaces of bank cards. A limitation of these devices is that they can only modulate the phase of light, which makes them easy to copy for clever criminals in the counterfeiting field.

The new holographic color prints developed by the SUTD team are a bit more complex than that while having an aesthetically pleasing appeal, researchers said. The device is comprised of nano-3D-printed polymer structures that can be particularly useful in document protection, they said in the release.

The new device works by modulating both the phase and amplitude of light, Yang said. Holographic color printing displays a colored image under ambient white light by tuning the amplitude of light, while projecting up to three different holograms under red, green, or blue laser illumination, he said.

Researchers achieved this effect through the fabrication of a new type of nanostructured pixel strategically arranged on a plane, with each pixel acting as phase control or amplitude control for the light. This dual-function of holographic color printing increases security and deters counterfeiting, Yang said.

To create the method, the team developed a computer algorithm that takes multiple images as its input, and generates an output file that determines the positions of different phase and colored filter elements. They then sculpted the holoscopic print with the aid of a nanoscale 3D printer, Yang said.

What creates the device’s color pixels is an overlay of structural colored filters  onto phase plates—using posts of different heights as the filters—to modulate the light’s amplitude. The team described its solution in an article in the journal Nature Communications.

Yang said he and the team hope their method will be used in the future as security for anti-counterfeiting efforts.