Survey: Open Source Is Growing, But the Community Is Troubled 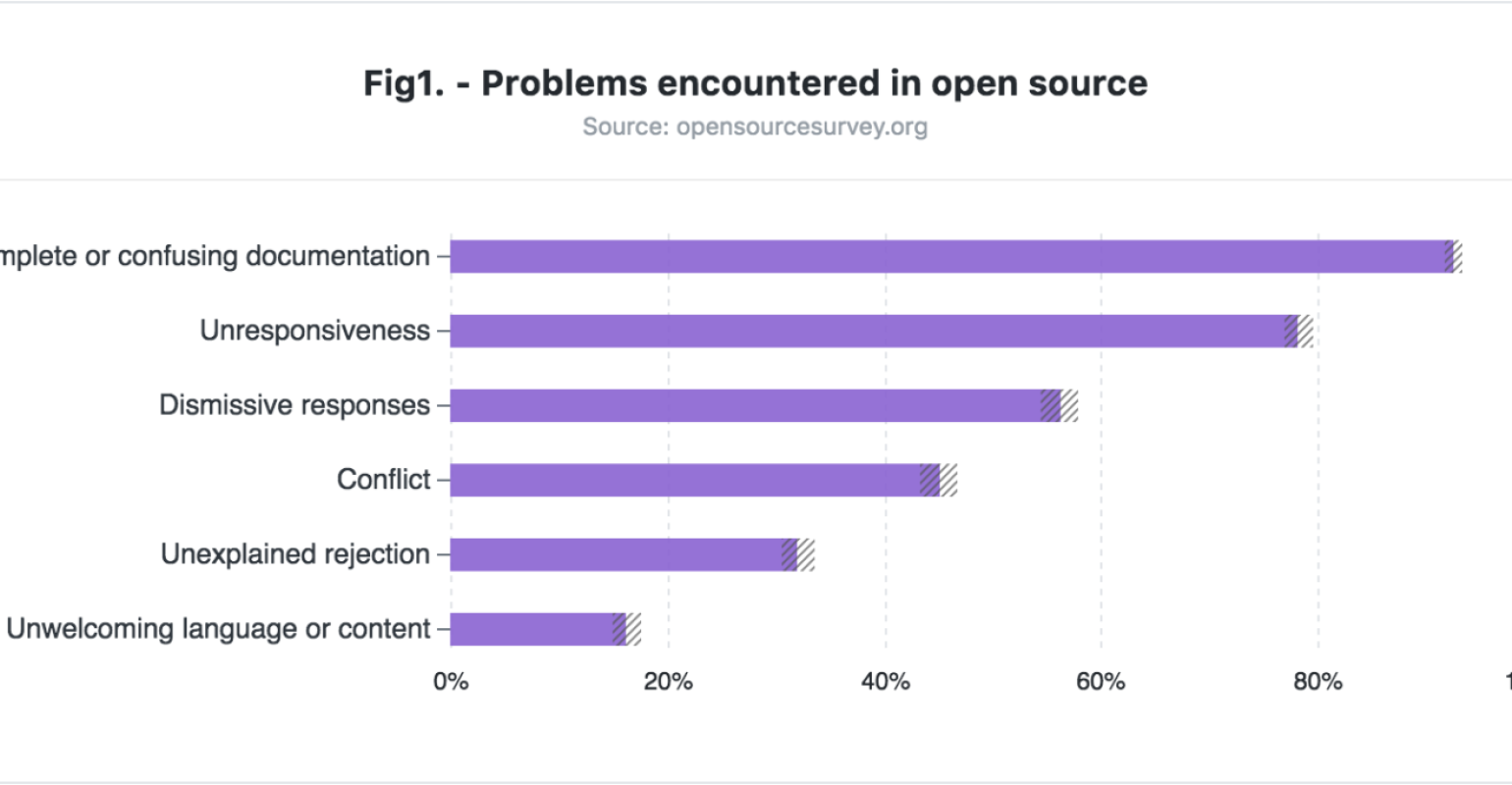 Open-source software and hardware are more popular than ever. But a new survey released by GitHub points to some big problems in paradise, including issues of best practices, negative interactions, and gender representation.

So what's the status of the open-source community? GitHub, the popular online development platform for open-source projects, recently unveiled the results of a survey it conducted of 5,5000 random users from more than 3,800 open-source repositories on GitHub.com, as well as more than 500 non-random users from communities that work on other platforms. The results give a lot of insight into the demographics of the community and the progress open source has made thus far. But it also outlines some particular challenges, especially in the way of best practices and community inclusivity.

According to 93% of respondents there is a "pervasive problem" in the open-source community with incomplete or outdated documentation. Given how important documentation is for orienting newcomers to projects (and to the open-source community in general), GitHub's survey said, “Improving that documentation is an impactful way to contribute back to open source.” Yet 60% of contributors surveyed said they rarely or never contribute to documentation. “Many people participate in open source on the job, where confidence in the terms of use is critical. Unsurprisingly, licenses are by far the most important type of documentation to both users and contributors: 64% say an open-source license is very important in deciding whether to use a project, and 67% say it is very important in deciding whether to contribute,” the survey reads.

Paired with this is an issue with negative interactions within the community. While it was reported that negative interactions are infrequent, the collaborative and accessible nature of open source makes these negative experiences highly visible when they do happen, according to GitHub. Of those surveyed, 21% reported that they stopped contributing to a project because they experienced or witnessed negative behavior. While 18% of respondents reported having a negative reaction, 50% said they've witnessed one between two or more people. “It's not possible to know from this data whether the gap is due to people who experienced such interactions leaving open source, or broad visibility of incidents,” GitHub said.

According to the survey:

GitHub's survey also revealed demographic data about its community and discovered a “profound” gender imbalance. “95% of respondents are men; just 3% are women, and 1% are non-binary,” according to the survey. GitHub found that though women were about as likely as men to say they are very interested in making future contributions, women are more likely than men to encounter language or content that makes them feel unwelcome, stereotyping, and unsolicited sexual advances.

“Open source provides the basis for technology that serves the entire world. In some ways, the diversity of the user base is reflected or even exceeded among open-source contributors, but in other ways there are still huge gaps in representation,” the survey said.

Users also reported that open source has become their default when choosing software. Security and stability were listed as the best value propositions of open source. The majority of respondents (58%) said they believe open-source software is usually more secure than proprietary software. Overall 72% of respondents said they always look for an open-source option when evaluating new tools.

The full GitHub Open Source Survey, along with a complete data set, can be downloaded here.