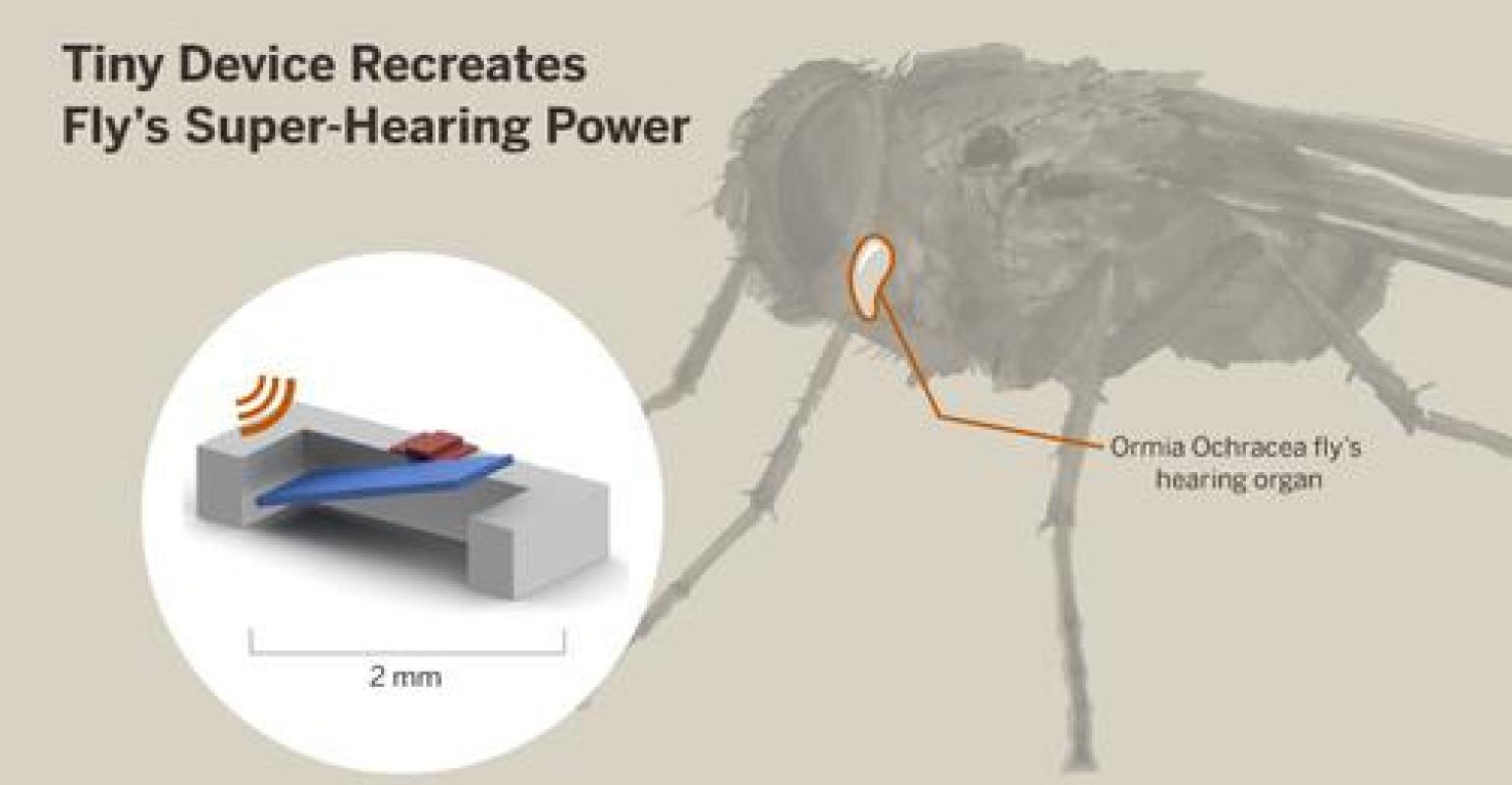 A new low-power microphone device inspired by the hearing of a fly could pave the way for a new generation of intelligent and battery-free hearing aids that focus only on what a listener wants to hear.

Researchers out of the Cockerell School of Engineering at the University of Texas (UT) Austin used the hearing structure of a yellow-colored Ormia ochracea fly -- which can pinpoint the location of a chirping cricket accurately with a sound-processing mechanism that determines the direction of sound within two degrees -- to create the device. Neal Hall, an assistant professor in the school's department of electrical and computer engineering, led the team.

Generally, humans and other mammals locate the sources of sound because of the finite speed of sound and the separation between our ears, Hall told Design News in an interview.

"When you and I as humans locate an event based on sound, we are taking advantage of the finite speed of sound," he explained. "Sound is just pressure waves that move through the air at finite speed. If a car blows its horn as you are walking down the street, you know which direction to turn since the sound hits one of your ears just a fraction of a second before the other ear. Subconsciously, this information is used by your brain to discern the direction of origin of the sound." 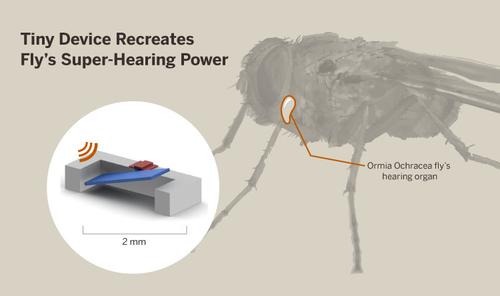 The particular type of fly studied by the team has a different sound experience because the sound phase shifts in a teeter-totter fashion due to the fly's hearing structure, Hall told us. This amplifies the time delay and allows the fly to pinpoint sound more accurately than other insects or animals.

"The fly is able to process these small differences mechanically, using the teeter-totter," he said. "The minute sound pressure differences across the span of the teeter tip it into a rocking motion, similar to a teeter-totter on a playground when kids of different weight sit on opposing ends."

Using this structure as a model, the UT Austin team built a 2-millimenter-wide microphone out of silicon nearly identical to the fly's hearing organ. The device is comprised of a flexible beam and piezoelectric materials, the latter of which allowed the team to simultaneously measure the flexing and the rotation of the beam. This movement allowed them to replicate the fly's hearing.

Though similar devices have been built, the use of piezoelectric materials is unique, allowing the device to operate on very little power by turning mechanical pressure into electrical signals, Neal said.

This low-power feature could make it useful for the future development of hearing aids that don't need a battery to work. Currently hearing-aid users have to replace the battery of their devices, incurring cost and risking the reliable performance of the device.

The way the device allows someone to listen also could pose a benefit for hearing aids because it could block out sounds a person doesn't necessarily want to hear, Hall said.

"In addition to locating sound, the fly teaches us a technique to make a tiny microphone that is inherently directional," he said. "This is incredibly useful in certain scenarios. For example, hearing aid wearers find it difficult to hear in environments with high ambient background noise, such as a restaurant. Turning up the volume to hear the person of interest also amplifies everything else in the room. A microphone that hears only in a desired direction while filtering out background noise enhances the ability to understand the person of interest."

The device also could have military and defense applications by creating new devices that could allow soldiers to pinpoint sound in dark environments when they don't have proper visual aids. In fact, the Defense Advanced Research Projects Agency (DARPA) funded Hall's research.

Hall and his team plan a couple more years of research to develop the microphone, focusing on increasing the range of frequencies it can pick up to cover the full audio bandwidth, he said. It's also delicate and its physical design needs to be reconsidered to make it suitable for consumer packaging and handling.