COVID-19 Has Makers Building Their Own Ventilators 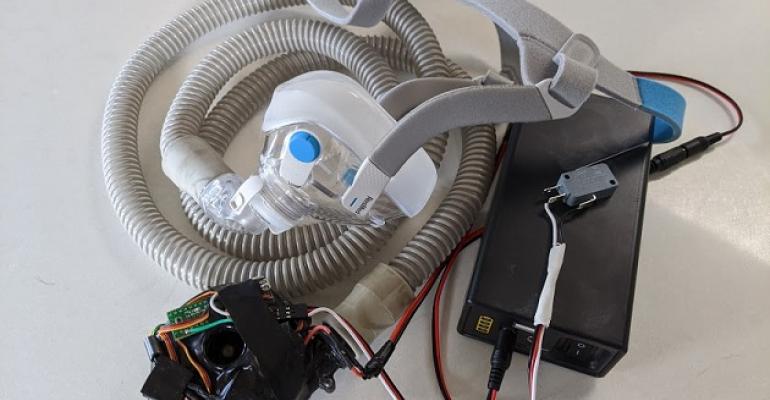 If you’re going to prototype your own medical device, make sure you use caution.

Before we get into this: You should absolutely not be building an Arduino-based ventilator as a substitute for an actual FDA-approved medical device.

As more news comes in of medical equipment shortages and measures being taken to overcome them by companies and groups big and small, the maker community has been experimenting with ways to build their on ventilators.

YouTuber Johnny Lee came upon a novel, low-cost ventilator solution and created a video around his idea for feedback from engineers and medical professionals.

Lee realized that a CPAP machine, for people with sleep apnea, uses a blower that is simply a brushless DC motor that be driven by a standard electronic speed controller – meaning it can also be driven by an Arduino. Connecting an Arduino Nano to the CPAP machine’s blower, and using a repurposed CPAP face mask and a DC power supply, allowed him to use software to control the speed of the blower – creating a simplified ventilator.

Lee posted details of his project on GitHub and is also requesting further input.

He also posted a video of his project:

Lee is not the only one looking at low-cost, open-source medtech solutions to the COVID-19 crisis. A Facebook group, called Open Source COVID19 Medical Supplies, has formed with the goal of “[Providing] local makers with medically vetted, open-source plans and support in organizing local value chains so you can create and distribute much needed protective gear and equipment to your local communities.” The group currently counts over 69,000 members and is hosting a hackathon around creating an open-source ventilator, among other projects.

Thankfully, those involved in these projects have been very open that their work is not medically-cleared and are encouraging anyone interested in jumping on board to exercise caution and to be aware of the limitations of their projects.

Armstrong Subero, an author and computer engineer, posted a blog addressing some risks of Arduino-based ventilators as well as some guiding principles for makers looking to build their own. He has warned that any Arduino-based design should not be used for medical purposes unless absolutely necessary.

“This is because platforms like the Arduino were designed as a platform to be used in a learning environment. They were not designed for the real time, safety-critical design that is required to build ventilators,” Subero wrote.

The Arduino’s versatility has led many people to use it for applications, such as real time systems, that it was never intended for. “If you have no choice you can use the Arduino for design of a ventilator system. But the lack of debugging makes it difficult to do so and increases the likelihood of bugs in your firmware, and increases the risk of failure within the system,” Subero wrote.

He does however offer several tips for improving design on the sofware and hardware side such as using an RTOS, using a platform with libraries that meet safety requirements, using a watchdog timer, and adding a feedback system (a full list of his tips are on his blog).