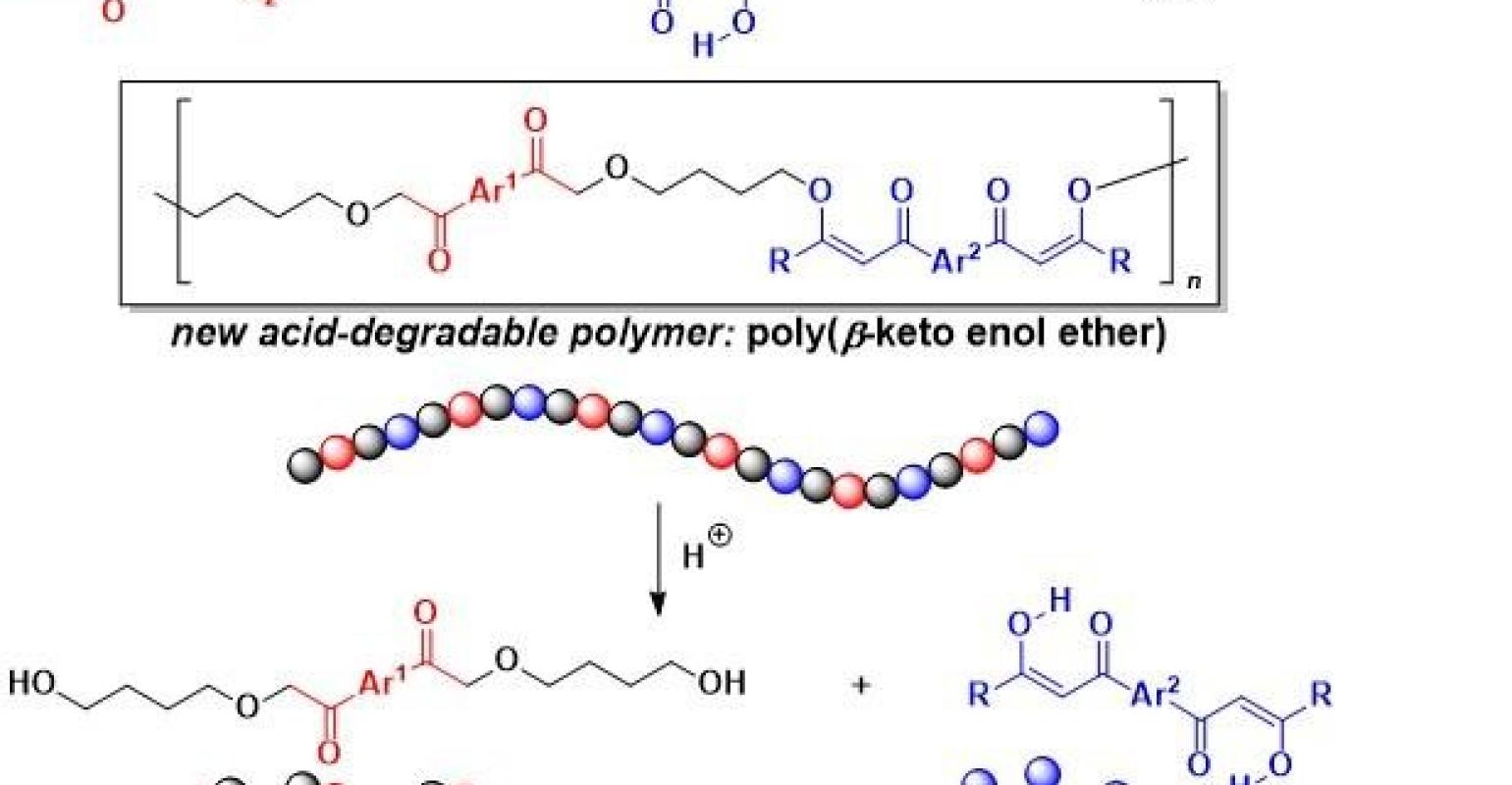 The material can degrade under mild acidic conditions, making it well-suited for environmentally friendly applications.

Researchers around the world are seeking solutions for the problem of plastic pollution by developing more environmentally friendly materials to replace traditionally designed polymers.

As a part of this effort, a team of researchers in Japan has created a new type of synthetic polymer that can degrade under mild acidic conditions and also is potentially recyclable, making it more eco-friendly than conventional polymers in that it is easier to break down as waste material, they said.

Researchers Eiji Ihara and Hiroaki Shimomoto developed the new polymer—called poly(β-keto enol ether)--after experimentation with the use of a diazocarbonyl group of materials for polymer synthesis, they said.

In their work, they polymerized bis(diazocarbonyl) compounds comprised of two diazocarbonyl groups in one molecule to yield a number of polymers with chemical structures they hadn’t seen before, researchers said.

After some experimentation with this process, they discovered that by using a combination of three monomers--bis(diazocarbonyl) compound, bis(1,3-diketone), and tetrahydrofuran (THF)--they could create a new type of polymer using the β-keto enol ether framework in the main chain.

This finding is significant because this material showed a high sensitivity to acidic reactions, and can degrade using only a small amount of acid--which would make degradation of the polymer itself much faster and easier, researchers said.

“The degradation can indeed proceed even with trace of acid in [a common solvent] in an NMR tube, while the polymer structure remained intact in a [dimethyl sulfoxide] solution, demonstrating the high sensitivity of the β-keto enol ether linkage to acidic conditions,” researchers wrote in an abstract for a paper on their report in the journal Macromolecules.

Researchers tested the new polymer for how it would react when exposed to different materials that could potentially break it down and also to see how it would degrade.

What they found is that the polymer would cleanly degrade into a combination of two low-molecular weight compounds in high yield under mild acidic conditions, researchers said. In fact, one of the degraded products was the monomer itself, bis(1,3-diketone), which shows that this material can be recycled. The other product was a dihydroxy compound derived from the bis (diazocarbonyl) compound other monomers, researchers said.

In tests, the synthetic polymer showed a high acid sensitivity, but with different reactions. In a chloroform solution, the β-keto enol ether framework of the polymer degraded. Researchers attributed this to the solvent containing a very small amount of acid spontaneously generated from the solvent molecule under an ambient condition, they said.

However, in other solvents without an acidic trace, such as dimethylsulfoxide, the polymer did not degrade at all, demonstrating the extremely high sensitivity of the polymer structure to an acidic stimulus, researchers found.

Whether it degraded in response to an acidic solution or not, this highly acid-sensitive reaction could be useful for some important applications, researchers said. One example is a material that could encapsulate a medication that could release by rapidly responding to a mild acidic environment, they said.

The obvious use for the material, however, is to replace current polymers used in commercial products, such as bottles and packaging, researchers said. Its rapid degradability could help alleviate some of the environmental damage currently being caused by non-degradable synthetic polymeric materials, they said.