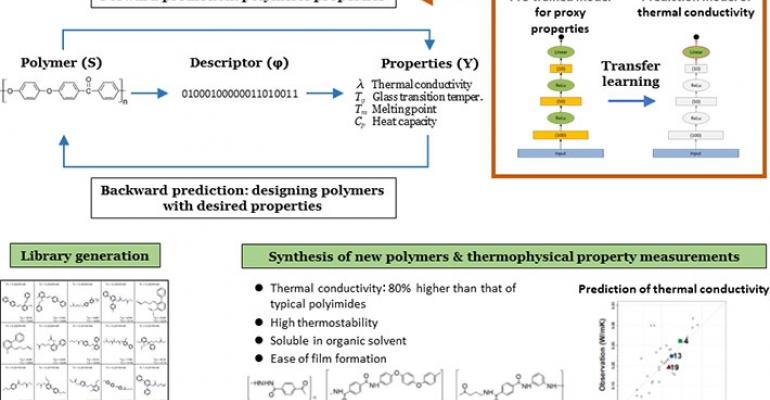 Usually it takes a lot of trial and error as well as lab experimentation to identify new materials, particularly high-performance materials for next-generation applications. For this reason, researchers are always searching for shortcuts and ways to cut the time it takes for traditional material discovery.

Researchers in Japan have found a high-tech way to do this using machine-learning methods that could identify key materials even from a small data set. A team from various Japanese think tanks, including the Tokyo Institute of Technology, used artificial intelligence (AI) to design and identify polymers with high thermal conductivity, which paves the way for their use to manage heat in 5G mobile devices as well as in other applications.

The study demonstrates how AI gives scientists an advantage over traditional ways of searching for high-performance materials, researchers said.

"Machine learning for polymer or soft material design is a challenging but promising field, as these materials have properties that differ from metals and ceramics, and are not yet fully predicted by the existing theories," researcher Ryo Yoshida said in a press statement. Yoshida is professor and director of the Data Science Center for Creative Design and Manufacturing at the Institute of Statistical Mathematics, Research Organization of Information and Systems, in Japan.

Polymer materials aren’t normally conductive, which is why identifying new materials of this kind that can conduct heat is such a boon for material scientists. These types of polymers can be used to replace metal in some key electronics and other applications, making them more cost-effective.

The team in Japan developed a specific machine-learning workflow to help them predict the properties of polymers. Machine learning is a type of AI that enables computers to "learn" from given data so they can intelligently provide information to researchers.

The workflow researchers developed is comprised of two distinct prediction steps--forward and backward predictions. The forward prediction is aimed at creating a set of prediction models that describe various polymeric properties-- such as thermal conductivity and glass-transition temperature--as a function of chemical structures in the constitutional repeat units.

To do the backward predictions, researchers then inverted the trained forward models, creating a model conditioned by a desired property requirement, researchers said. By solving this inverse problem, the machine-learning method could create, using computations, materials that exhibit the desired properties, they said.

Researchers reported on their work in a paper in the journal npj Computational Materials.

Researchers found that their method enables the discovery of materials with properties for which they were searching, even from a very small data set, they said.

Specifically, the study used a data set of polymeric properties from PoLyInfo--the largest database of polymers in the world—which is housed at NIMS. While the data set itself is massive, it has a limited amount of data on the heat-transfer properties of polymers, researchers said.

Keeping this in mind, researchers pre-trained machine-learning models on proxy properties in cases in which sufficient data were available on the related tasks; these pre-trained models captured common features relevant to the targeted properties, researchers said.

This allowed the method to identify thermal-conductive polymers—three in particular that were selected for synthesis and processing—with high predictive performance despite the small data sets with which researchers were working, they said.

Tests confirmed that the new polymers have a high thermal conductivity of up to 0.41 Watts per meter-Kelvin (W/mK)--which is 80 percent higher than that of typical polyimides, researchers said Polyimides are a group of commonly used polymers that have been mass-manufactured since the 1950s for applications ranging from fuel cells to cookware.

Researchers plan to explore more aspects of how machine learning can inform material discovery, including the training of computational systems to work with limited data by adding more suitable descriptors, Yoshida said. The team plans to continue its work beyond identifying polymers to discover other innovative materials, he added.