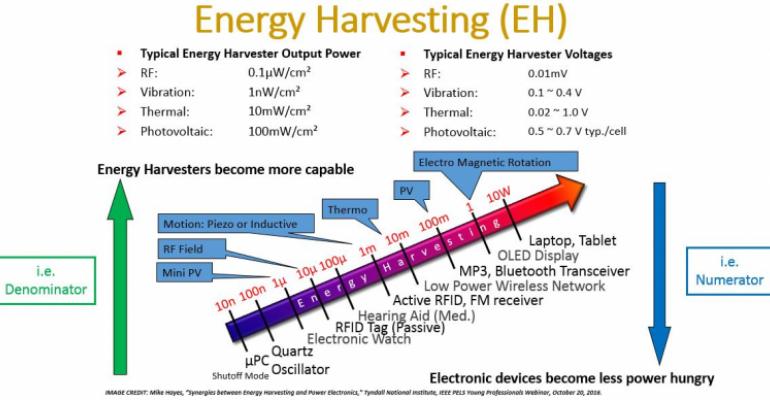 Energy harvesting has moved solidly out of lab and into the market, and it will be key to enabling the ambitious projections for the number of future Internet of Things (IoT) devices and wearable technology that is expected to grow significantly in the next several years.

However, a top-down approach rather than the traditional bottom-up approach for power management is the way forward for device design to allow for energy harvesting to realize its potential, a longtime engineer and power-electronics expert said.

Speaking to Design News ahead of his talk, Zahnstecher said that many people still aren’t aware that there is a substantial production ecosystem for energy harvesting that is allowing engineers to use these technologies as they build power sources for new devices. 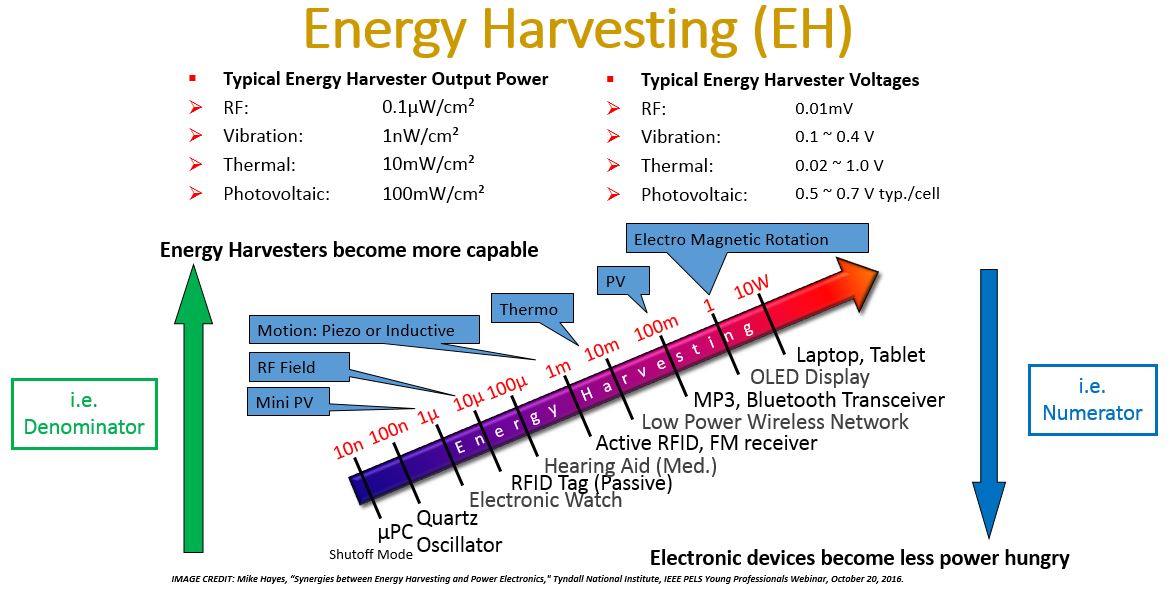 “In energy harvesting, there is a lot of FUD (fear, uncertainty and doubt) out there thinking that there aren’t usable amounts of power available [in energy harvesting], or that it’s still a lab experiment and not mature enough,” he said. “I’m dispelling the rumor with data and examples to demonstrate that this energy-harvesting ecosystem exists today. It’s nascent but it exists.”

Energy-harvesting technologies fall into three basic categories, Zahnstecher explained. There are transducers, which make the conversion from some type of ambient energy to usable, electrical power; power-management integrated circuits (PMICs), which, among other things, do the power conversion that’s required for the energy load; and storage, such as batteries or supercapacitors that store the harvested energy, he said.

Together these comprise the energy-harvesting ecosystem, and “there are production solutions across the spectrum today, including from the biggest players in the industry,” Zahnstecher said. For example, on the PMIC side, major players such as Linear Technology, Analog Devices, Texas Instruments, and Cypress Semiconductor, just to name a few, have production technologies available, he said.

Designers & Innovators. Learn more about some of the latest designers and innovators and what they're up to at  ESC Silicon Valley  , Dec. 6-8, 2016 in San Jose, Calif.  Register here  for the event, hosted by  Design News  ’ parent company, UBM.

However, to fully leverage the potential of the energy-harvesting technology that’s both available and still emerging from the labs, designers should take a different approach to power management than what’s traditionally been taken, Zahnstecher said. He compared the concept—part of what’s called intelligent power management (IPM)—to fractions, in which there is the numerator and the denominator. The denominator represents the energy source and the numerator represents the device power requirements, he said.“

A lot of focus and thought in the industry that’s enabling all of these things is to increase the denominator, like [thinking] a bigger battery is required,” Zahnstecher explained. “My point is that is the absolutely wrong way to go about it. What has a much larger and more immediate impact is to try to reduce the numerator-—reduce your consumption.”

Zahnstecher cited the design of low-power processors—such as small ARM processors—which only turn on blocks of processing power when needed. This same principle can be applied to the design of wearables and devices for the IoT to allow energy-harvesting to be a viable solution not just for supplemental power, but to provide battery-free power over the device lifetime, he said.

“With intelligent power management, it’s just a cuter way of saying one should be smarter with the power you have,” Zahnstecher said. “Being able to turn something off when you’re not using it is the best way to save power--now just figure out how it can be optimized to operate at the most efficient point on the load curve.”

For instance, designers tend to architect devices by looking at the sum of maxima for all loads in the system, he said. “But that’s the wrong way to go about it,” Zahnstecher said. “You’re not operating at the maximum all the time--you can still meet your needs and have all the reliability that you need even if your power source doesn’t require everything you need at all times by utilizing intelligent power management techniques.”

By taking this approach, electronics designers can find a way to use energy harvesting to the utmost advantage to power the billions of devices and wearables that are expected to come online in the near future, he said.