Software Helps Answer the Question: Is Industry 4.0 Right for You? 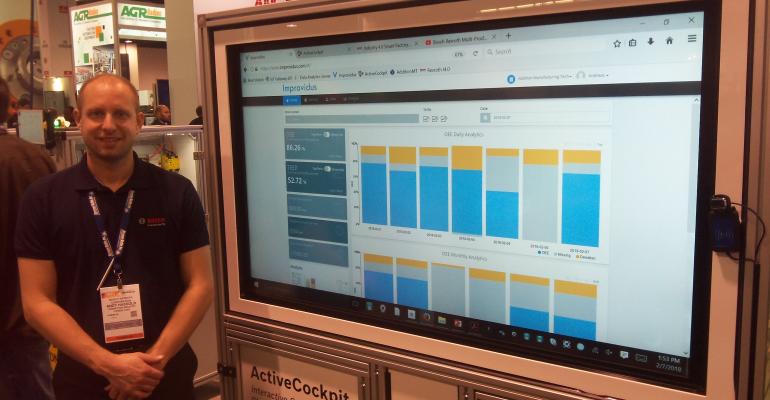 Manufacturers who are considering Industry 4.0 may now have a better way of determining if it’s right for their factory.

At the Pacific Design & Manufacturing show in Anaheim, Calif., this week, Bosch Rexroth demonstrated a software and consulting package called Improvidus that promises to help clear up misconceptions about Industry 4.0, while setting manufacturers on a path to greater productivity. The key to the package is its use of data to enable manufacturers to measure – in quantitative fashion – the efficiency of their facility. “This is not subjective,” Andy Hassold, connected industry consultant for Bosch Rexroth, told Design News. “It’s not about gut feelings. We’re talking data.”

Indeed, Improvidus is about data. Combined with the expertise of Bosch engineers, Improvidus enables manufacturers to turn data into information, and then see more clearly into the processes that determine efficiency. Manufacturers who work with Bosch (and many already have) first go on a “waste walk” in which consultants identify inefficiencies, such as over-production, under-use of materials, and excessive inventory.

“We identify their pain points – things that are bothering them on a daily basis,” Hassold told us.

Then, using the Improvidus software, Bosch consultants do an analysis.  A built-in feature called the Overall Equipment Effectiveness (OEE) visualization tool enables users to “see” equipment availability, production output, and deviation information. It also enables them to drill down into a “deviation data set,” ultimately guiding them to recommendations that are right for their factory.

“The way Improvidus plays a role is it helps the manufacturer get more information about the failures in their process, so they can attack those failures with technology,” Hassold said.

In the process, it also enables them to see what role Industry 4.0 might play inside their factory. Hassold said this step sometimes surprises manufacturers. “Among manufacturers, there’s often a misconception,” he said. “They think Industry 4.0 equals automation. But that’s not necessarily the case. Industry 4.0 is really about enhancing the life of workers, not replacing them.”

Hassold said the idea for the Improvidus product emerged from inside a Bosch Rexroth facility in Bethlehem, Pa. Engineers developed the software and applied it to their own factory, then decided to use it more broadly outside the company. First, though, the concept had to pass muster with company management. “We submitted this as a business idea in our own ‘shark tank’ innovation framework,” Hassold said. “We pitched it, just like on TV, and went through multiple rounds until we got funded.”

The resulting product is not one that Bosch Rexroth sells, but rather, offers as a service to customers.

Now, the task of Bosch consultants is to help customers work through their misunderstandings about Industry 4.0 and determine whether it’s appropriate for their factories. “We’ve done a lot of interviews with customers, and the perception in some parts of the market is that Industry 4.0 is costly and doesn’t work,” Hassold said.

Bosch Rexroth combats that by educating them on the concept of Industry 4.0 and on ways to make production more efficient. In most cases, Bosch engineers recommend a “roadmap” for customers to help rid them of their inefficiencies. Sometimes that roadmap involves Industry 4.0. Sometimes, it doesn’t.

In all cases, however, the idea is to identify the right processes. “We just want to help them get rid of the pain points,” Hassold said. “Because there’s a lot of time and money associated with those.”

The First Steps Toward Robot Automation