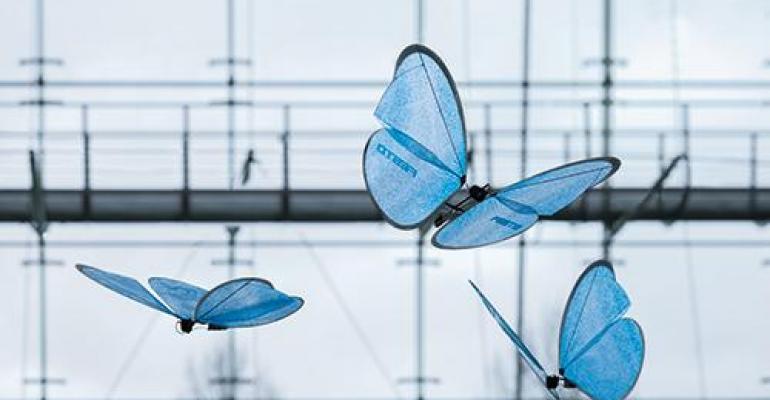 Biomimicry and 3D printing have come together in new swarming ant and butterfly robots that act very much like their insect counterparts, the inventions of German robotics firm Festo.

The company introduced its two new robots -- BionicANTs and eMotionButterflies -- at the Hannover Messe 2015 trade fair in Hannover, Germany.

The robots not only look similar to the insects they're inspired by, but also behave in similar ways due to a number of both visual and structural Festo technologies that demonstrate how robots can interact not only with each other but one day also with humans, Gabriele Goebel-Heise, a spokeswoman for Festo's technology corporate communication, told Design News in an interview. Festo specializes in industrial robot technology, and so the robots are in part a study in how to create technologies that will allow robots and humans to interact in an industrial environment.

"In thinking about production of the future, the real and virtual worlds are continuing to grow together," Goebel-Heise said. "The systems envisaged will consist of closely networked components and subsystems. The constant information exchange here guarantees the operational safety of the individual participants and hence the process stability of the entire system. [With the new robots,] Festo is already showing how several objects can be coordinated without colliding in a three-dimensional space thanks to multifaceted networking."

Festo produced the physical components of the robots through a 3D-printing process of laser sintering, and then finished with the electrical circuits of the robots attached on the outside, integrating both the design and function of the robots. 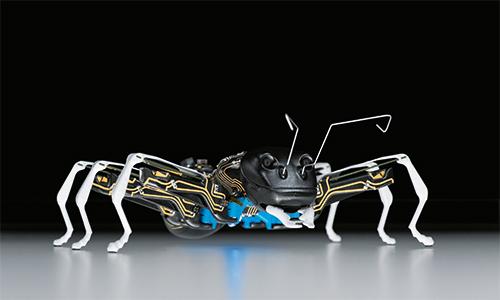 The BionicANTs, like real ants, communicate with each other and coordinate actions and movements, according to Festo. "The artificial ants thus demonstrate how autonomous individual components can solve a complex task together working as an overall networked system," the company said on its website.

The BionicANT has a 3D stereo camera in its head along with an infrared optical sensor at the bottom of its body, which records how much ground it covers. Battery power is provided by two onboard lithium-polonium batteries that provide up to 40 minutes of untethered power before needing to be recharged.

The eMotionButterflies also include technologies that allow for complex movement and spatial orientation so the robots can fly in ways similar to real butterflies and also together in swarms without colliding. These technologies include eight to 10 infrared cameras that record imagines in the range not visible to the naked eye, Goebel-Heise explained.

"The installed infrared cameras register the infrared markers affixed to the eMotionButterflies," she said. "With conventional systems these markers are passive reflectors; i.e. they receive and reflect infrared light. However, the camera system installed here uses active markers, which emit light autonomously. This light is then recorded by the cameras."

In addition to these cameras, there are also two infrared LEDS, or active markers, that emit infrared light on the upper portion of each butterfly that also aid in controlled navigation, Goebel-Heise said.

"Since the light only needs to pass from the marker to the camera, it is possible to monitor a larger space with the same number of cameras," she said. "In addition, the markers do not permanently emit light but flash only for a fraction of a second. The cameras record an image in synchronization with this flash. Since the markers flash only briefly, the electrical consumption is very low and thus energy-efficient."

MORE FROM DESIGN NEWS: In-Store Robot Makes Your Glasses While You Wait

All of the control components of the butterfly are in its torso, including electronics, an accumulator battery, and two servomotors, Goebel-Heise said. The wing root is directly mounted to the servomotors, with the two front and two rear wings attached. The rear wing is also attached to the torso using a joint that serves as a steering gear. The wings themselves are comprised of 0.75 mm bent carbon-fibre rods covered with capacitor foil.