HomeAutomationIf Robots Replace Humans, Maybe They Should Be Taxed
Recent
Automation
Will I See You at the Virtual 2022 RT-Thread IoT OS Global Tech Conference?
May 27, 2022
Novel Silk-Protein Eyed for Tendon Repair
May 27, 2022
NTT Data Powers Indy 500 Predictive Analytics
May 27, 2022
At NI Connect: More Companies Discuss Benefits of Test
May 27, 2022
POLL
Supplier News is Checking Out Programmable Automation Controllers
May 27, 2022
What's the Latest in Additive Manufacturing?
May 26, 2022
Top Gun: Maverick Roars into Theaters
May 26, 2022
New 3D Printing Technique Prints Glass for Microstructures
May 26, 2022

If Robots Replace Humans, Maybe They Should Be Taxed 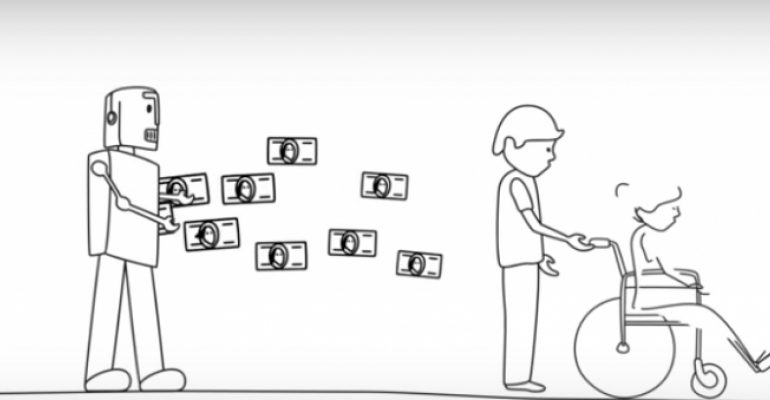 Bill Gates is only the latest person to propose the idea of a tax on robots that replace human workers.

Imagine a human factory worker who does $50,000 worth of work. As such this human worker pays income tax, social security, state, federal, ect. Now imagine that the factory converts to a smart factory and his job is replaced by a robot. Shouldn't that robot be subject to similar taxation?

That's the argument Bill Gates made in a recent interview with Quartz. The philanthropist and founder of Microsoft is worried that the pace of automation and worker replacement will happen too rapidly, faster than regulation, and society in general, can keep up. A tax on robots and robotic production, he argues, would slow down the speed of automation and allow businesses and regulators to plan better for worker displacement and the larger impact of automation.

From his interview with Quartz:

“You ought to be willing to raise the tax level and even slow down the speed” of automation...That’s because the technology and business cases for replacing humans in a wide range of jobs are arriving simultaneously, and it’s important to be able to manage that displacement. You cross the threshold of job replacement of certain activities all sort of at once.”

In Gates' mind the the tax revenue would come from profits generated by the cost savings made with robotic automation or directly through some sort of “robot tax.” Gates doesn't believe robotics companies will be outraged by the tax and he feels it would not discourage innovation:

“People should be figuring it out. It is really bad if people overall have more fear about what innovation is going to do than they have enthusiasm. That means they won’t shape it for the positive things it can do. And, you know, taxation is certainly a better way to handle it than just banning some elements of it.”

He continued by saying the revenue generated by the tax could go toward helping people with lower incomes – improving social services, elder care, and providing better quality education for children.

Gates is not alone in his thinking. On February 16 the European Union (EU) rejected a proposal to impose a so-called robot tax on business owners in order to fund programs that would support and retrain workers whose jobs were automated. In a statement released to Reuters, The International Federation of Robotics (IFR), an industry group concerned with the global robotics industry, said a robot tax would have a “a very negative impact on competitiveness and employment.”

The robots industry has argued that robotic automation will be a boon to the job market – increasing productivity and creating new jobs. A 2015 white paper, "Robotics Fuel the Next Wave of U.S. Productivity and Job Growth," released by the Association for Advanced Automation (A3) compared data from the Bureau of Labor Statistics with robot shipment data and reports from a wide range of US manufacturing firms and concluded that use of robots in manufacturing is correlated with an increase in employment.

In its own 2016 World Robotics Report the IFR said that robotics has had a positive impact on empowerment globally, citing the German automotive industry, where the number of employees has increased in parallel to the growth of robotic automation, as an example. According to the IFR, the United States is the fourth largest single market for industrial robots in the world and accounted for three-quarters of all new industrial robotic units sold in North America in 2015. “With a stable economic situation, it may be expected that North America will see average annual growth of five to 10 percent in sales of robots from 2016 to 2019,” the IFR says.

Member of the European Parliament (MEP) Mady Delvaux, the author of the report on Civil Law Rules on Robotics that proposed the robot tax (among other measures) to European Parliament, was disappointed in the ruling against the robot tax, saying that lawmakers were failing to take into account the negative impact on the job market.

Though the tax was rejected, the EU did call for legislation to regulate the rise of robotic automation as well as ethical guidelines around the development and deployment of robotic technologies like autonomous vehicles, as well as establishing rules around liability for robots' actions.

However Delvaux told Reuters, “They rejected an open-minded and forward-looking debate and thus disregarded the concerns of our citizens.” In a debate speech delivered to the EU on February 15, Delvaux said, “The deployment of robots will have an impact on all aspects of life and therefore on work. Studies diverge: some predict a massive destruction of jobs, others are less pessimistic and consider that the jobs destroyed will be compensated by the creation of new jobs. It is clear, however, that our ways of working will change and that our educational systems will face enormous challenges to ensure the re-qualification of those who are active and to train young people in professions that do not yet exist.”

Social media reactions to Gates' proposal have been varied with many users on Reddit questioning the line between robots that replace jobs and software that does the same thing? “? Should every copy of MS Office that has displaced office admins (formerly known as secretaries or typists) also be taxed?” one Reddit user asked.

What do you think of a robot tax ? Let us know in the comments.