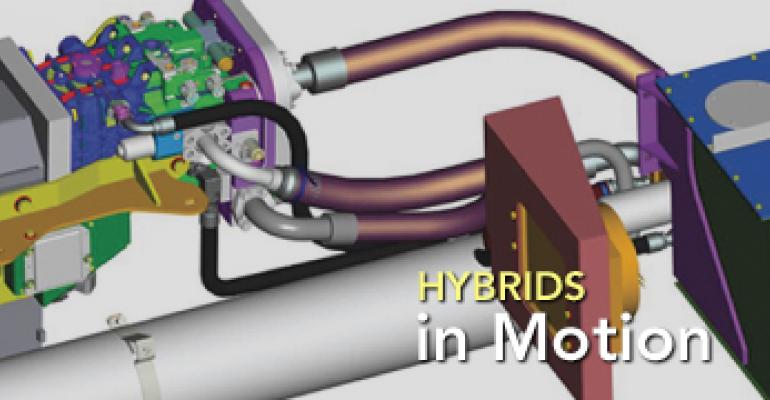 Green, hybridized motion technology using electric and hydraulic solutions is poised to deliver increasing levels of immediate impact in commercial vehicles. What remains to be seen is how hybrid production ramps up in the next 12 months, and how effectively engineering investments pay off on targets of 30-50 percent fuel savings.

With programs for hybrid-electric power systems, along with both parallel and series hybrid hydraulic systems, Eaton Corp. is matching the technical advantages of differing hybrid technologies with the needs and specific duty cycles of buses, delivery and refuse trucks.

The hybrid electric vehicle program (HEV) has taken the lead in terms of deployment, accumulating a total of 10 million miles of operation, most notably among customers such as FedEx, UPS and Coca-Cola. According to Kevin Beaty, business unit manager of Hybrid Power Systems for Eaton, total usage is ramping up with the program now accumulating 600-700,000 miles per month, and projections of a possible million miles a month by the end of the year.

The strength of hybrid electric systems is much higher energy storage capacity and generally low-to-moderate power capability. The Eaton HEV is a parallel configuration providing torque to the road wheels either through an electric motor, directly to a diesel engine or a blend of both. The hybrid drive unit is packaged in the same place as the transmission and bolts to the back of the engine. Key components include a high torque, permanent magnet motor capable of approximately 420 Nm (310 ft-lb) and a six-speed, automated mechanical transmission.

Separating the motor torque from the engine is an automated clutch that allows the system to be coupled or de-coupled from the engine. The electric motor acts as a generator during regenerative braking, providing ac power that goes to an inverter and is used for the motor controls. On the other side of the inverter is dc power and connections to the battery for energy storage. During braking, negative torque commanded on the motor acts as a generator to slow the vehicle down and charge the batteries for future use.

Eaton's parallel Hydraulic Launch Assist(TM) (HLA(R)) System, scheduled for production in September 2009, offers more efficient regeneration of braking energy and is targeting higher power applications. With an ability to recover energy very quickly, within 6 to 8 sec, almost 100 percent of energy recovered can be reused. The technology is well-suited for heavy "stop and go" driving such as refuse trucks.

If a 60-ton refuse truck is decelerating from 15 to 0 mph in 18 sec, 800 to 1,000 times a day, a lot of energy is flowing into the brakes. Instead of that energy going into the brake pads, the HLA System engages a clutch and links directly to a pump that rotates and pushes the flow into a high-pressure accumulator with a nitrogen bladder at pressures up to 5,000 psi.

"The efficiency of the accumulator is in the high-70s, low 80 percent range and provides a big advantage compared to an electric hybrid," says Robert Golin, product manager for Eaton's parallel Hydraulic Launch Assist(TM) program. "An electric hybrid cannot recover more than 55 to 60 percent of the energy it recovers from braking because there is no mechanical link and the battery is limited in its ability to store energy in a short amount of time."

Along with the payback and efficiency of the hydraulic system, the energy in the accumulator can be used to pick up bins and accelerate the vehicle. As a refuse truck takes off at full throttle, it requires 325-350 hp to accelerate up to 12-13 mph. During acceleration, the HLA system can engage and provide 175 hp for 6 to 8 sec.

The trucks are heavy, and use the most power going from 0 to 6 mph, that's when the HLA(R) System comes in and saves on fuel. In performance mode, all of the horsepower from the engine and HLA(R) are utilized simultaneously for maximum acceleration. For a company like Waste Management doing 800-1,000 stops per day, the hydraulic hybrid allows the truck to service 80-100 more bins a day. With a $1.50 to $2 profit per bin and more than 22,000 trucks operating 260 days a year, potential productivity improvements are substantial.

In a geared transmission, there are a fixed number of ratios of engine speed and vehicle speed (four ratios in a four-speed transmission, for example). In an IVT, there are an infinite number of gear ratios, so engine speed is decoupled from the vehicle's speed. This allows the engine to operate at or near the speed at which it achieves best fuel economy and/or exhaust emissions at any given power requirement.

The concept of operating an engine using this approach is illustrated in the engine efficiency graph, below left. The Series Hybrid Hydraulic System allows the engine to operate at speeds independent of vehicle speed, allowing the engine to run at or near the rpm of best efficiency for any given operating condition.

The power requirement of the vehicle determines the speed of the engine and it adjusts to operate with the best efficiency. In addition, the energy available from the high-pressure accumulator can be used to "load level" and meet the power demand of the vehicle. Unlike a non-hybrid vehicle, the engine itself does not need to meet the instantaneous power demand of the driver. The engine operates in a "pseudo steady state" manner where changes in power output can be done gradually without the rapid transients that adversely affect fuel efficiency and exhaust emission.

With the Series Hydraulic Hybrid set for introduction at the end of 2009 or early 2010, it will join the HLA(R) system in targeting specific vehicle types and applications to extend the "green" benefits of hybridized vehicles.

Hybrid power trains and the various competing technologies are on the verge of delivering substantial increases in fuel economy. With $1.3 billion for green vehicle technologies included in President Obama's final stimulus package, many companies in the green energy space will be competing for the funds, but it will likely be a positive for hybrid technology development.