Home>Automation
Recent
Automation
Want a Job? Here Are 21 Hot Engineering Gigs for 2021
May 17, 2021
This Breathtaking Bugatti Hypercar Reveals its 3D Printed Secrets
May 17, 2021
Big Oil Mines Carbon Capture Technology to Mitigate CO2 Contribution
May 16, 2021
Extraordinary Glass Objects Now Possible Thanks to 3D Printers That Use Lasers
May 16, 2021
Super Soft 3D Printed Plastic Might Pass for Human Hair. Would You Wear it?
May 16, 2021
New Method Uncovers Mysteries of Design for Smart Materials
May 15, 2021
Can 3D Printing Become the Doctor's New Tool for Repairing Broken Bones?
May 15, 2021
MIT Student Turns Her Artistic Eye to Medical Device Design
May 14, 2021 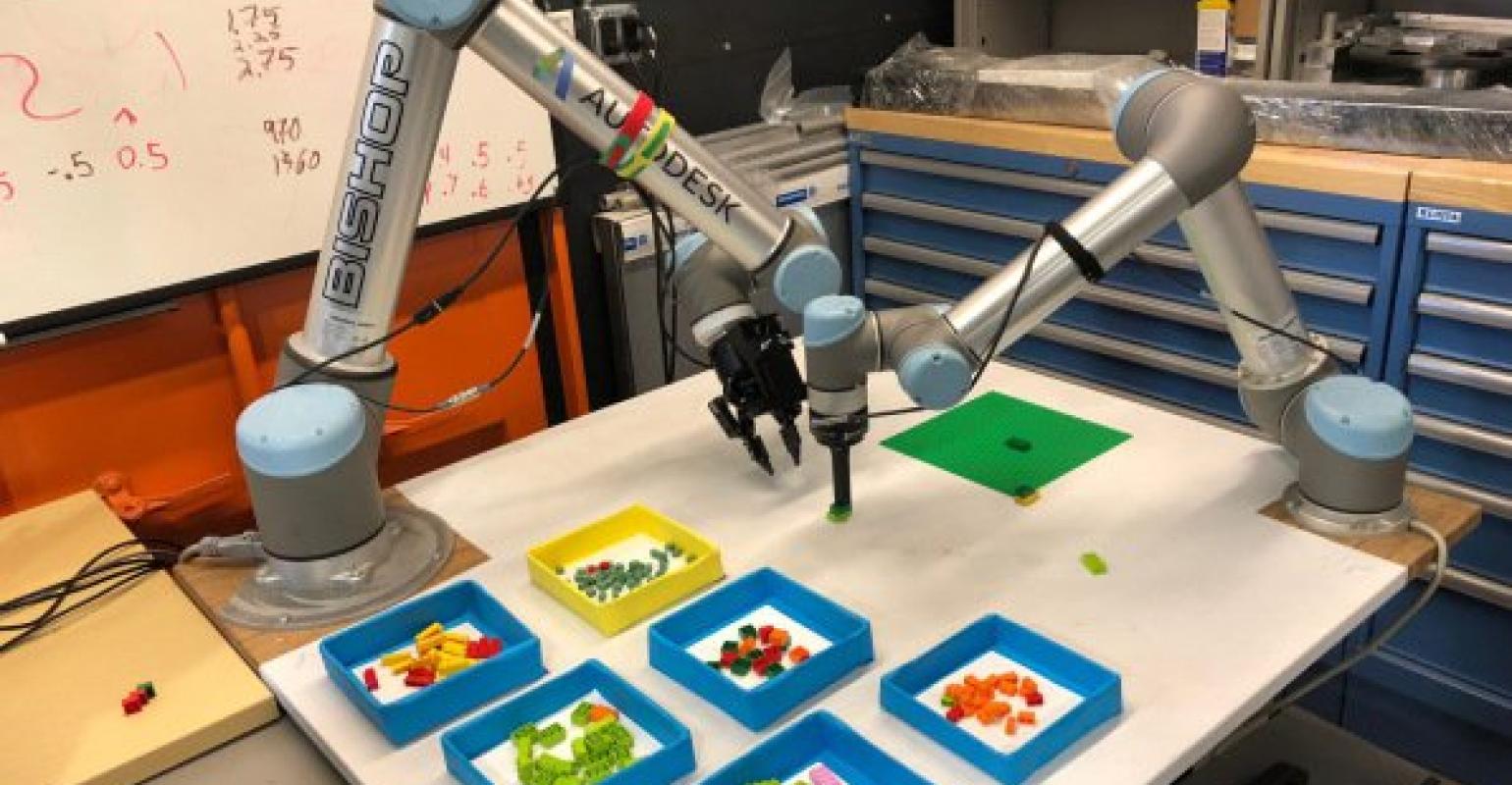 Autodesk has created the Brickbot lab, which is designed to expand the usefulness of robots in manufacturing and construction environments.

For years, the robot industry has nurtured a pet dream: There will come a time when robots will be making robots. It's funny how a dream long-held has a way of moving toward reality. Autodesk has created a lab in San Francisco on Pier 9 led by Mike Haley and Yotto Koga. A research team at the AI Lab has been working on a project called Brickbot that aims to redefine how manufacturing and construction customers engage and collaborate with robots.

Over the last two years, researchers at the AI Lab have been exploring whether or not a robot can learn how to assemble things in the same way a child learns how to build with Lego bricks. While on the surface it may seem simple, it’s a complex challenge. The project relies on sensor data and machine learning to enable a robot to infer what’s going on in its environment and then adapt on the fly to accomplish an assigned task.

The lab works to create real-world environments and expand the robot’s abilities within those environments. “The project is an automated robotic assembly system. It’s part of an effort to bring about the automated assembly of products. We focus on customer problems, which could be the assembly of a product or the automated construction of products or buildings,” Yotto Koga, software architect at Autodesk, told Design News. “We want to see if we can aid in the assembly by using automation. Building with Lego is not very interesting from a customer point of view, but those skills can turn into helpful activity.”

The researchers have been using the technology on toy bricks, but they will soon move on to real-world applications that mimic environments like manufacturing and construction. “When it comes to assembly, we look at how robots can do high-level tasks like picking from a bin. Or at a construction site, we’re looking at whether the robot can take things off a pallet or pick up things dumped on the construction floor,” said Koga.

Part of the task at the lab is to see if there are design considerations that can be brought to product development that would make it easier for a robot to manufacture the product. “Design is part of the project. How you design a product for manufacturing affects how things are put together,” said Koga. “It’s the virtuous cycle if you can design the parts for automated construction.”

Researchers are also looking at how the robot interacts with other forms of automation on an assembly line. They’re seeking ways that the robot can be more effective both on its own and in an environment with other automation. “We look at how you can make robot arms easier to use in a system that includes other automation,” said Koga. “We try to get a robot arm to interact with the environment. There’s a high level of complexity around assembly using sensors, cameras, or noise sensors to help robots interpret what is going on in the environment. As we gain proficiency on that, we’re looking at other aspects of automation.”

Working with Robots as They Are

In order to replicate the environment of Autodesk customers, the lab is only using the off-the-shelf robots that are available to customers. “We are using commercially available robots,” said Koga. “We’re trying to use the same robots and sensors that you would find in a typical factory with a robot.”

The lab is also looking at the context for robot tasks. Picking up a part from a bin where the parts are packed in a standard manner is one thing. It’s quite another to pick up a piece that is placed randomly. “We’re working on bin-picking and picking things up. How do robots re-grasp at the task level?," said Koga. “We use tools to get the things in place. We’re trying to see if we can get tool-use into the task. We’re approaching the problem in a generalized manner.”

At the core of Brickbot’s work is the real-world problems that Autodesk customers are trying to solve. “We want to try to make the developments from the lab accessible to all of our customers, not just the large ones. We want this to be helpful for even the smaller customers, who may want to make 100 products, or a company that wants to do highly customized manufacturing,” said Koga. “We want to see if that’s possible by using machine learning. It’s part of the first step toward more advanced automation.”