Chief Robotics Officer – A New Face in the C-Suite 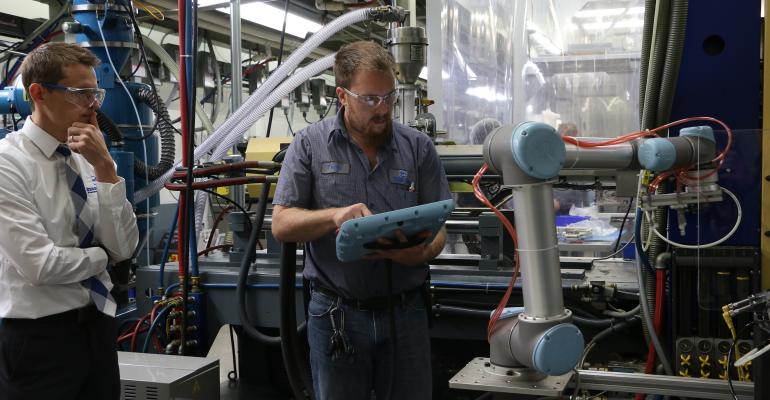 With robot projects proliferating, many companies have defined a new c-suite role to champion robotics automation: The Chief Robotics Officer.

Robotics experts at Universal Robots see a hole in the process of merging robotics into the manufacturing line, leadership. Tim DeGrasse, business development manager at Universal Robots, and Joe Campbell, senior manager of strategic applications at the company, have identified the need for the Chief Robotics Officer (CRO), a role to support the increase in the number of robotics-related initiatives at manufacturing companies.

DeGrasse and Campbell will team up together at the Pacific Design and Manufacturing show in Anaheim on Feb. 5 to present the session, The Role & Responsibilities of Executives Assigned for Implementing a Robotics & Automation Strategy. During the session, DeGrasse and Campbell will explain that manufacturers of all sizes: large, mid, and small, need to identify a robotics champion to ensure automation success.

The two robotics experts will look at real-world examples of successful robotics implementations to show how a CRO is needed. “We’re going to walk them through the structure of a collaborative robot project and look at the justification,” Campbell told Design News. “We’re going to show how we look inside an organization to see if they have a need to pursue automation. We’ll talk about the roles in the field, from the do-it-yourself to systems integration. We’ll look at the application requirements that would lean toward one type of integrator or another.”

Responsibilities of the CRO

Campbell noted that it’s important to outline the role and responsibilities of a robotics champion and how that role fits into the company’s overall organization chart. That includes outlining who the CRO will report to and who will report to the CRO, and well as explaining what skill set is required in order to implement an effective robotics strategy.

DeGrasse pointed out that the CRO needs to understand that qualities that make up an automation project that lends itself to robot solutions. “Before you deploy robots, you have to identify a good automation project, and you have to show that it is extremely profitable,” said DeGrasse. “Selecting the right projects helps the CRO generate quick wins that will deliver the ROI. In our session, we’re going to show how other people have done it quickly with small projects rather than building a huge implementation all at once.”