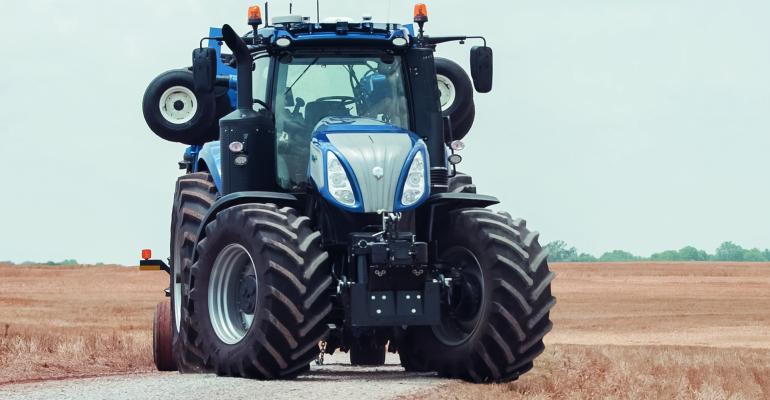 Autonomous operation is the future but electrohydraulic steering is moving ahead now with a focus on functional safety solutions, increased flexibility, and reducing cab noise.

The release of an Industrial Autonomous Tractor Concept by Case New Holland is spurring discussions on the future of electrohydraulic steering, but there are other key advantages driving the technology forward, as well.

These include an immediate need to develop functionally safe systems to meet new government regulations in Europe, new support for multiple forms of steering control, flexible system performance, and the ability to reduce noise levels by removing the traditional valve interface with the steering column from the cab area.

“The autonomous tractor is an example of where electrohydraulic steering is headed in the future, and autonomy is the hot button issue,” Aaron Krahn, engineering manager for Eaton Corporation’s Hydraulics Business, told Design News. “There is a lot of interest, at least, to define the future architecture of machines to be ready for that possibility. Having everything under electrohydraulic control, understanding functional safety, and being sure that you are partnering with suppliers that have those capabilities is key. It’s on most OEM’s minds, and it has driven them into action and active investigation into the impact on their own products.”

“Within industry now, we are seeing a significant increase in the desire for various forms of electrohydraulic steering for GPS navigation and/or joystick steering control, multiple steering inputs, and multiple devices that the operator can command from,” Krahn added.

With more regulations, especially in Europe, around how to assess the functional safety of hydraulic steering systems, there is both an increase in demand but also increased recognition that just a proportional valve with basic controls, while it may suffice from a performance standpoint, there is more required to implement safe systems. This is beginning to place more of an onus on suppliers to develop products that are more purpose-built for electrohydraulic steering and start to integrate some of that intelligence into the valve.

Eaton has been selling products into the agricultural market for GPS navigation for 10 to 15 years, traditionally providing a valve solution to aftermarket navigation suppliers or OEMs working with vendors to integrate systems using a variety of displays and ECUs. Krahn said that the goal now is to develop products that have diagnostic capabilities and an ability to react to system failures, along with upgrades to the controllers used with these devices. System suppliers focused primarily on GPS navigation are now coming to suppliers like Eaton with developed capabilities in the functional safety arena seeking help to implement solutions. The key is how to put together systems that meet these regulatory requirements.

“We are also seeing demand outside of Ag coming on more aggressively both in construction and material handling,” Krahn added. “A lot of this is being driven by the desire to have future capabilities to do autonomous vehicles and equipment. Case New Holland has some videos on the use of autonomous tractors, for example, along with interest from other market areas, as well.”

One change is a broader focus than the Ag market for electrohydraulic steering, and how new products need to be differentiated to address some of these other markets that, in the past, have been seen as strongholds for traditional steering. Flows and pressures will need to be different from what OEMs have done in the past, and another key is how OEMs will integrate systems based on their in-house capabilities and their perspective on how a machine should behave.

“In the last one to two years, we have achieved an inflection point where the value of electrohydraulic steering systems has increased because of some of these discussions about autonomous operation,” Krahn said. “There is also value in the freedom that a full steer-by-wire system could give to vehicle designers, as well. They are no longer limited by simply running hoses up into the cab or near the cab to get a traditional steering valve connected to the column. It frees up that constraint when you move to an electrohydraulic system.”

In many of these applications, steering is the last system to go electrohydraulic in machines such as a wheel loader, for example. Today, the industry uses hydraulic means to assure that steering has priority and the options will be interesting for some OEMs to think through. Once everything is electrohydraulic on the vehicle, can OEMs reduce parasitic losses using software instead of hardware in some cases? Krahn said that OEMs are beginning to develop a broader understanding of the value of electrohydraulic systems, and that is beginning to accelerate at least in interest in going down that road in different markets.

On the controller side, the functional safety requirements are having the biggest technology impact. The regulations can drive some changes in the hardware but it really drives changes in the processes being used to develop the controller and software. The engineering teams developing these products need to understand upfront what the requirements are. It is very difficult to take an existing piece of electronics hardware and do the analysis and move through all the steps of addressing functional safety after the fact.

It is a major investment for OEMs to meet the requirements and develop that capability, purchasing specific tools and bringing in third parties to do evaluations and audits of their systems.

“With new valve developments, it is not as challenging because the regulations do provide guidance for the mechanical parts which make it easier to do after the fact. But certainly as valve products are being developed, the architecture of the valve assembly has to be considered and there is a need to think through failure modes,” Krahn said. “If a component in the valve system fails, what is the effect? Does the system lose steering control and is there some other valve in the system that can help regain steering control? Thinking through that valve logic and the failure modes becomes something that is even more important than it has been previously.”

With some of the products used for steering today, there will continue to be an evolution moving toward redundant-type solutions where the system may have multiple hydraulic valves so the system can still provide steering in the case of a failure.  Also, there may be ways to be sure that a failure can be isolated properly. So if the system does have a spool that sticks, for example, it may not be enough to just stop commanding to it but also have some method for blocking it.

“The capability to have diagnostics throughout the system also is becoming more important,” Krahn added. “As part of meeting the regulations, there is a need to prove some level of diagnostic coverage. One piece is the failure modes analysis and making sure that a user can diagnose where the failure is to isolate it from the rest of the system. But then from a general system perspective, the regulations require a certain level of coverage and provide guidance on how to calculate that.”

That alone can drive the integration of sensors, so integrating the system and coming up with clever ways to obtain diagnostic information using fewer sensors is a priority and becomes a system discussion. New valve designs can integrate all sorts of sensors but that is not the most efficient way to do it. Krahn said there might be information available on the vehicle already that can be used to infer certain failures.

“It becomes important to think of it as a system, to optimize the solution,” Krahn said. “Even if the OEM plans to use hydraulic components, everyone involved needs to understand the full system or no one can really provide the right solution.”

“It becomes the state-of-the-art where OEMs know, by developing the guidelines, they are developing a safe system. Not following the guidelines may have some implications …, if they do have a legal issue in the future,” Krahn added. “Traditional steering needs to follow the safety guidelines as well, but the systems are less complex and you are dealing with the system in a more established environment so it is a smaller hurdle.”

The key with electrohydraulic steering systems is that they provide performance advantages and especially flexibility that isn’t available today, no matter how an OEM plans to implement it. There is flexibility in how the operator interfaces with the machine by using a steering wheel and a joystick, or just a joystick. But with traditional steering, the valve has a fixed feel because torque versus wheel speed and steering wheel speed is fairly fixed using a specific valve. Using steer-by-wire that can be tailored to the operator or the work situation allows the machine to have a lot of flexibility in the feel and performance. OEMs can speed steering up, or slow it down given vehicle or operator inputs, so there is a lot of flexibility.

“Another big advantage is noise reduction. Today, using the traditional steering interface between the valve and the steering column, you have hydraulics located very near to the cab. It is always a challenge to isolate that noise but, if you can take the hydraulics out of the cab completely, that solves the problem to a large extent and that becomes a key driver for OEMs to pursue this route,” Krahn added.