Are Hydraulics the Way to Improve Machine Efficiency? 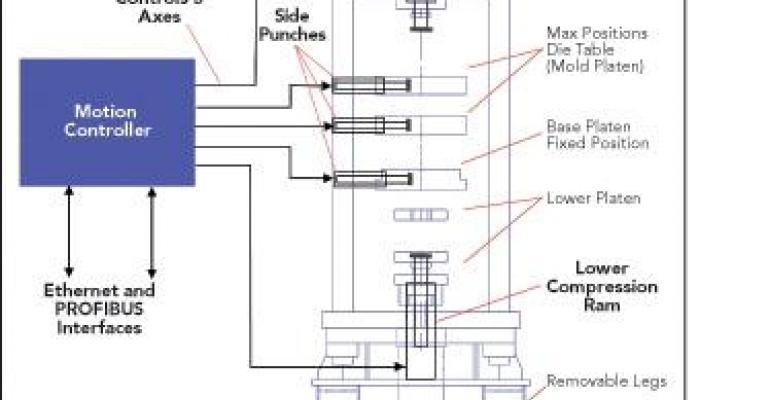 What's the most efficient power source for your machine? It depends, of course. Does the application involve a lot of back and forth motion where there are heavy loads to be moved or held, or where there are a large number of motion axes involved? If so, fluid power, specifically hydraulics, can be a more efficient power source than electric motors. In applications with these characteristics, a hydraulic power unit (HPU) with a single, controllable hydraulic pump along with an accumulator can be much more energy-efficient than linear electric motors or rotary electric motors with gear boxes or pulleys.

An electric motor would have to be huge to equal the motive force of the typical hydraulic cylinder. In multi-axis applications, with one motion axis moving the other's motion base (for example, to articulate a robot arm as it follows different motion paths), the weight of the motor on the top axis becomes an energy-wasting burden on the base axis. 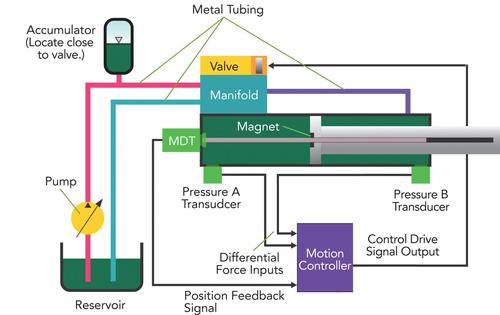 One of the main power advantages of hydraulics in complex applications stems from the fact that a single hydraulic pump motor can power multiple motion axes (hydraulic cylinders or hydraulic motors) that are each a fraction of the weight of an electric motor-driven actuator of equivalent power. The hydraulic pump motor can be sized to meet the average load the system must carry, which can be significantly less than with electric motor-driven systems, where the motor driving each axis must be sized for the peak load of that axis.

Energy, ready when you are
Hydraulic systems smooth out the flow of energy required by storing hydraulic fluid pressure using accumulators. (See the image above.) Accumulators typically consist of a high-strength tank with a bladder inside, with oil in the tank outside the bladder and gas inside it. They store energy when demands are lower and transmit energy back into the system to satisfy peak demands. The accumulator capacity must be high enough that the hydraulic pump doesn't need to respond to quick changes in demand for oil.

Electric motors can also be at an efficiency disadvantage against hydraulics when the machine must move very slowly. Reducing the speed of electric motors via gearboxes is extremely inefficient. Though a gearbox's efficiency increases with the torque of the motor, it often tops out at about 70 percent. Gearboxes lose power due to lubrication churn and friction, which is lost primarily in the form of heat.

An additional factor in hydraulics' favor over gear-driven electrical systems is that, because of inertia and the amount of gear lash that is inevitable in gear-driven systems, they can be hard to control precisely in applications that require moving heavy loads at high speeds with a lot of back and forth motion. Some machines have gone to linear motors for lighter loads to achieve accuracy and responsiveness, but they also sacrifice efficiency.