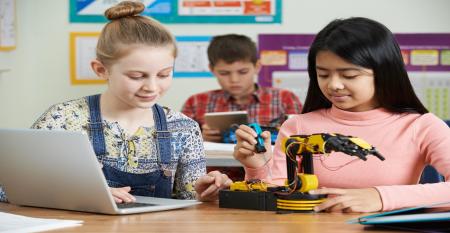 Supplier News Looks at Differential Pressure Sensors and More
Feb 24, 2022
This week’s new products also include top modules and carts that boost the payload of the MiR250 robot.

Creating an Animatronic Robot Head (Part 2)
Feb 17, 2022
How many ways do you think there are to equip your robot’s eyes with pan-and-tilt functionality?

Robots Are Getting Ready for the Super Bowl
Feb 10, 2022
It’s a pre-game party! Sam Adams warms up the Boston Dynamics robots for the big game.

Creating an Animatronic Robot Head (Part 1)
Jan 26, 2022
Once you’ve created a fully articulated robot head, the next step is controlling it.

Steve and Max’s Awesome Displays
Jan 03, 2022
You start with a simple PCB carrying a few tricolor LEDs, and before you know it you’re working on a fully articulated robot...

Light-Powered Robots Can One Day Help Clean Up Oil Spills
Dec 24, 2021
Researchers have developed a robotic film, powered by sunlight, that can move freely on any body of water.

Want to See a Robot Farm? Watch These Ag Machines Go
Nov 17, 2021
Robots are changing the economy of agriculture. Automated machines are set to increase food production in coming years.

Ever See a Robot that Moves Like Jagger? Check out Boston Dynamics
Oct 30, 2021
Boston Dynamics created a video where its robots mimic the moves of Mick Jagger and the Rolling Stones.