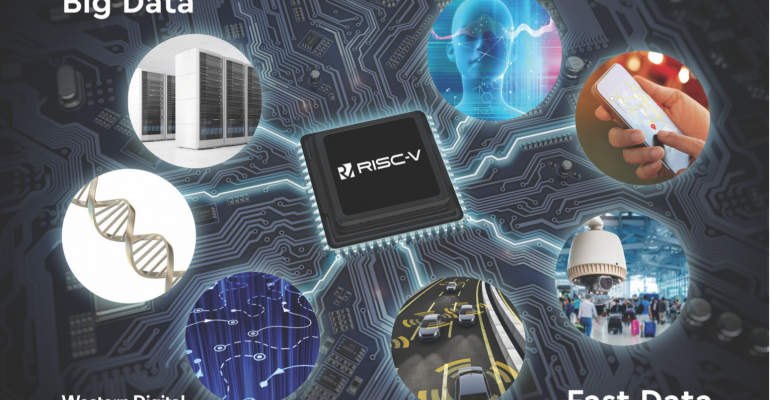 Western Digital believes open-source architecture is the best solution for Big Data and Fast Data and has committed to transition all of its cores to RISC-V.

RiSC-V, the open-source computer core architecture, will be getting a big push from Western Digital in the coming years as the company has pledged to transitioning its own consumption of processors to RISC-V. According to the company Western Digital ships over one billion cores per year, and plans to double that number. And if all goes according to plan, they will all be based on RISC-V.

During an announcement at the recent seventh-annual RISC-V Workshop in San Jose, Calif, Martin Fink, CTO of Western Digital stressed this move isn't about cost saving or building a new product pipeline for Western Digital, but about innovation and creating an Internet of Things (IoT) ecosystem that can both support the massive storage needs of Big Data while also facilitating Fast Data - delivering Big Data as quickly and as efficiently as possible.

“I'm not announcing a RISC-V product ... there's no expectation of directly selling a processor,” Fink said. “We're not doing this for cost reasons. This is all completely and totally about innovation. ... Unlocking our ability to bring innovation to data and process it in ways we can't contemplate today.”

Fink said that most people think of Western Digital as a storage company, but WD wants to be thought of as a data company going forward. He added that applying general purpose computing, wherein the everything is centered around the CPU, to Big Data is simply not the best way forward. “Assuming you've sort of reached the best possible lowest common denominator you have something that's hopefully pretty good. But the odds that it's implemented in the optimal way for your application are pretty slim.”

Fink cited emerging applications such as machine learning, autonomous vehicles, and blockchain technology are prime examples of use cases wherein powerful, application-specific computing will be preferable over general purpose computing. Devices based at the IoT Edge may be performing safety- and mission-critical tasks and won't be able to rely on cloud computing. Instead, they will need make the best data-based decisions as quickly as possible. And Western Digital doesn't believe general purpose computing will be up to the task.

“RISC-V open architecture engenders incredible amounts of innovation,” Fink said. “Today when we think about storage and data we think about, let's go grab [the data] from somewhere in the data center, let's move it to a central location, do some stuff to it, and send it all back. ... How do we move all of that work to right where the data is? Let's go process the data where it lives.”

Western Digital plans to develop RISC-V cores itself as well as through strategic partnerships, and Fink commented that the company may even buy cores from other parties to leverage the work of others. The best estimate he was willing to give on delivery of Western Digital's first RISC-V device was late 2019 through 2020. He was also quick to note that all of this is at its early stages and RISC-V is still a nascent technology that is just beginning to come into its own. Fink warned developers that as an open-source architecture RISC-V will face a lot of criticism, but he believes RISC-V's course will chart similar to Linux in the long-term impact it will have.

“You're going to have a number of people that say RISC-V isn't ready; it isn't mature [but] it's all good. Nobody would laugh at the power and impact that Linux and other open-source projects have had in our industry. That will happen [for RISC-V] and it will grow,” Fink said. “We have a tremendous amount of confidence in the ability of the industry to drive this message of openness and drive this through.”

RISC-V has built up a lot of momentum this year thanks in part to SiFive, which in October debuted the first-ever RISC-V chip that supports Linux and which will present at the Embedded Systems Conference (ESC) Silicon Valley this week. The announcement represented the first time RISC-V had escaped the confines of embedded systems.

This latest announcement positions RISC-V as a serious solution for the IoT landscape, as well. But Fink said for RISC-V to really take off engineers are going to have to both ignore the criticisms and also think beyond conventional core development.

“If you take a RISC-V processor and make it look like an X-86 or an ARM, you're missing the point,” Fink said. “The point is about the data. Start from the data, that's where the power is, and say 'What do I need to solve the problems I have for my data?' Make the processor a means to an end, not an end unto itself. That is where the real opportunity is for us in storage and in memory.”