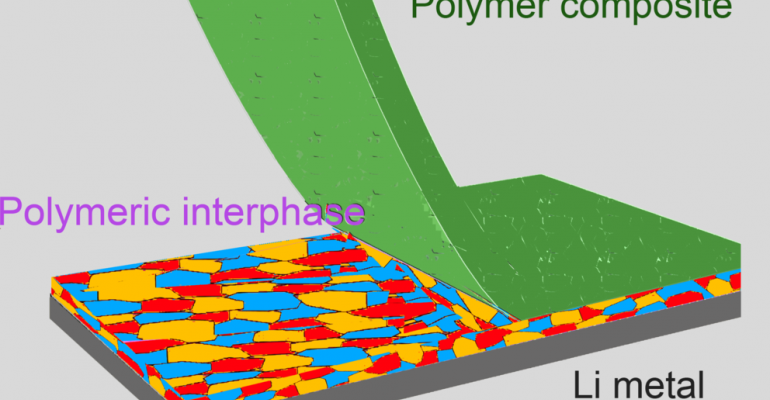 It’s just a matter of time and more research before solid-state lithium batteries reach the mainstream.

Lithium ion batteries have become the go-to solution for everything from cell phones and personal electronics, to electric vehicles (EVs), to support of renewable energy on electrical power grids. But lithium ion batteries typically use a carbon graphite anode (negative electrode) to store lithium ions during charging and release them during discharge. The graphite anode can only store so many lithium ions, limiting the amount of energy that can be stored by the battery.

It is possible to make the anode out of metallic lithium, which creates a battery with two- to three-times the capacity of a lithium ion battery using a graphite anode. A problem occurs when charging a battery with a metallic lithium anode—crystals of lithium form on the surface of the anode and for spikey, needle-like dendrites that can grow large enough to piece the separator and short out on the cathode (positive electrode). This can cause the battery to overheat and even catch fire.

Stability Depends on the SEI

The region between the metallic electrode and the electrolyte is called the solid-electrolyte interphase (SEI). The stability of the SEI has a dramatic effect on battery performance because a salt layer on the surface of the battery's lithium electrode can insulate it from conduction electrons while allowing the conduction of lithium ions.

"This is why lithium metal batteries don't last longer — the interphase grows and it's not stable," said Donghai Wang, professor of mechanical and chemical engineering at Pennsylvania State University. Penn State has developed a new solid, polymer-based, electrolyte whose SEI reduced dendrite formation. "In this project, we used a polymer composite to create a much better SEI," said Wang in a Penn State news release.

The project was led by chemistry doctoral student Yue Gao, and the enhanced SEI-producing electrolyte is a reactive polymer composite consisting of polymeric lithium salt, lithium fluoride nanoparticles, and graphene oxide sheets. The construction of this solid electrolyte has thin layers of these materials, developed by Thomas E. Mallouk, Evan Pugh University Professor of Chemistry, at Penn State.

"There is a lot of molecular-level control that is needed to achieve a stable lithium interface," Mallouk said. "The polymer that Yue and Donghai designed reacts to make a claw-like bond to the lithium metal surface. It gives the lithium surface what it wants in a passive way so that it doesn't react with the molecules in the electrolyte. The nanosheets in the composite act as a mechanical barrier to prevent dendrites from forming from the lithium metal."

Using both chemistry and engineering design enables the technology to control the lithium surface at the atomic scale. "When we engineer batteries, we don't necessarily think like chemists, all the way down to the molecular level, but that's what we needed to do here," said Mallouk.

The reactive polymer also decreases the weight and manufacturing cost, further enhancing the future of lithium metal batteries. "With a more stable SEI, it's possible to double the energy density of current batteries, while making them last longer and be safer," Wang said.

With intense research at universities around the world, by all of the major battery manufacturers, and by car companies like Toyota, BMW, and newcomer Fisker, solid-state lithium batteries are expected to begin large-scale commercial production sometime after 2025. Projects like the research at Penn State are advancing the knowledge base that will eventually move this new battery technology into the mainstream.