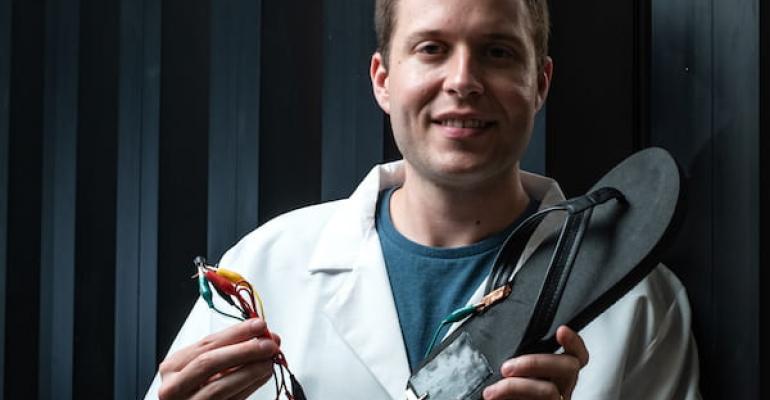 Researchers have created a new triboelectric generator that can be used to power wearable technology by harvesting energy from movement.

There are a number of new ways researchers have found to create devices that harvest energy from movement for the development of wearable devices that don’t need batteries. It’s a good option, as the first wave of wearable technology has been used for fitness devices and smart clothing that people can wear to monitor their activity.

To make designing such technology easier, a team at Rice University has developed a new device that leverages what’s called the triboelectric effect, the same one that causes static electricity. The triboelectric effect creates a charge when two materials rub together and then are pulled apart again.

It’s this phenomenon that a team in the Rice lab of chemist James Tour has used to create a metal-free nanogenerator out of laser-induced graphene (LIG). Graphene is a two-dimensional (2D) nanomaterial well known by chemists to have high electrical conductivity. While the device doesn’t produce a lot of power, it could come in handy to keep small wearables in working order, he said.

“This could be a way to recharge small devices just by using the excess energy of heel strikes during walking, or swinging arm movements against the torso,” Tour said.

To create the device, researchers first had to create LIG, a graphene foam produced when chemicals are heated on the surface of a polymer or other material with a laser. This process leaves behind only interconnected flakes of 2D carbon.

Tour and his team first fabricated LIG on a material called polyimide, but also used other natural and common materials—such as plants, food, treated paper and wood—to create LIG electrodes, researchers said. They then tested LIG electrodes made of polyimide, cork, and other materials to see how well they could produce energy as well as for durability, Tour said.

In experiments, the researchers connected a folded strip of LIG to a string of light-emitting diodes and found that tapping the strip produced enough energy to make them flash.

Generator in a Flip-Flop

They also embedded a larger piece of LIG within a flip-flop, which allowed a wearer to generate energy with every step because the graphene composite’s repeated contact with skin produced a current to charge a small capacitor, said Rice postdoctoral researcher Michael Stanford.

“The nanogenerator embedded within a flip-flop was able to store 0.22 millijoules of electrical energy on a capacitor after a 1-kilometer walk,” said Rice postdoctoral researcher Michael Stanford, lead author of the paper. “This rate of energy storage is enough to power wearable sensors and electronics with human movement.” Researchers published a paper on their work in the journal ACS Nano.

The team tests various configurations to garner and assess results. In the folding configuration, they sprayed LIG from the tribo-negative polyimide with a protecting coating of polyurethane, which also served as a tribo-positive material. In this set-up, when the electrodes were brought together, electrons transferred to the polyimide from the polyurethane.

Charges driven by subsequent contact and separation also could be stored through an external circuit to rebalance the built-up static charge, researchers said. The folding LIG generated about 1 kilovolt of electricity, and remained stable after 5,000 bending cycles, they reported.

The best configuration the team came up with was comprised of electrodes of the polyimide-LIG composite and aluminum, researchers said. This produced voltages above 3.5 kilovolts with a peak power of more than 8 milliwatts.