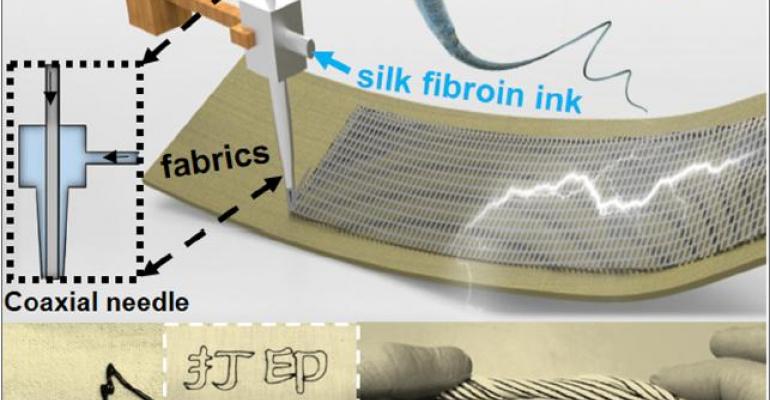 A new printing technique developed by researchers in China can create electronic threads for e-textiles in a one-step process.

One of the ways researchers are making wearable technology less bogged down by electronic equipment and more user-friendly is by developing fabrics with electrical capability built in.

A research team led by Yingying Zhang, a professor in the Department of Chemistry at Tsinghua University in China, has made progress in this area with the development of a one-step 3D-printing technique that prints flexible electronic fibers onto fabrics and textiles.

“Generally, the attachment of rigid and bulky electronic on textile will deteriorate the breathability and flexibility of textiles, leading to a poor wearing comfort,” she told Design News. “One way to alleviate this problem is to develop flexible functional fibers in a textile.”

To achieve this, Zhang’s team used a 3D printer equipped with a coaxial needle to draw patterns, pictures, and lettering using core-sheath fibers onto textile, giving it the ability to transform movement into energy. The work shows that these textiles “could be used for the energy-management purpose, such as for harvesting and storing energy,” she said.

The Chinese team is not the only group of researchers creating fabrics that integrate electronic components into fibers; however, many of them use multiple steps, which makes them more time consuming. What’s novel about the work of Zhang’s team is that it’s the first time researchers have developed a one-step process using 3D printing to develop these electronic textiles, Zhang said.

Researchers used two inks to 3D-print the e-textiles—a carbon nanontube solution to build the conductive core of the fibers and silkworm silk for the insulating sheath, Zhang said.

For the process itself, researchers connected injection syringes filled with the inks to the coaxial nozzle, which was fixed on the 3D printer. Then researchers used this process to draw customer-designed patterns, including Chinese characters that spelled out the word “printing,” the word “silk” in English, and a picture of a pigeon.

“For harvesting energy, the silk fibroin sheath is used to induce electrons and the carbon nanotube core is used to transport the electrons,” Zhang explained. “The mechanism is based on the coupling effect of contact electrification and electrostatic induction. The silk fibroin sheath tends to lose electrons when contacting with other materials—with a low-level position in the triboelectric series. Therefore, the contact/separation of the two parts will generate a variable dipole moment, leading to the flow of electrons, thus generating electricity, in the electrodes.”

For electricity storage, researchers based the design on a supercapacitor composed of two parallel sheath-core fibers, where the sodium-carboxymethyl cellulose sheath serves as a solid-state electrolyte, and the carbon nanotube core serves for the conduction and storage of electrons, she added. The team published a paper on their work in the journal Matter.

Researchers plan to continue to continue their work to develop new wearable electronics based on the materials they’re developing as well as to tune the electronic interfaces, including sensors and actuators, Zhang told us.

“At the same time, we will develop a new technique for the large-scale fabrication and integration of flexible electronics and e-textiles by the utilization of new techniques—such as 3D printing—and controlling the assembling behaviors of the functional materials during processing,” she said.