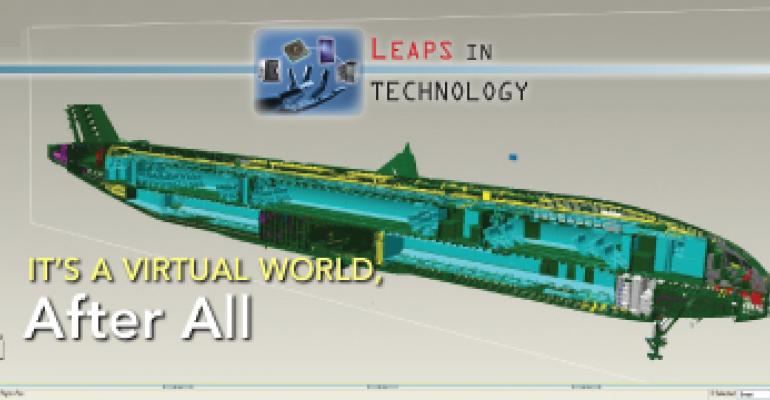 Even as engineers flock to the virtual worlds of CAD and CAE to do ever-complex early stage design and testing, the physical world typically commands center stage once again when it comes time to validate and build prototypes and construct manufacturing tooling.

Thanks to a host of emerging technologies, however, the somewhat elusive concept of virtual product development - the notion of designing, prototyping and developing both the product and the manufacturing processes in a fully digital environment - is starting to become a reality. Highly powerful, but cost-effective graphics and computing platforms, easier-to-use visualization, simulation and 3-D collaboration tools, along with integrated systems for developing and testing products that have mechanical, electrical and embedded software components, are inspiring and enabling engineering organizations to do increasingly more in the digital world.

While companies will never be able to move away from physical validation 100 percent of the time, best-in-class players are taking this concept seriously and expanding their scope in the digital world, according to Michelle Boucher, research analyst at Boston's Aberdeen Group. "We consistently see in studies that time to market pressures are driving changes in the way people develop products," she says. "Companies are striving to get more insight earlier, make processes more efficient and ultimately, make better products that are more competitive."

So what exactly is paving the way for the new era of complete digital product development? Here are some of the emerging trends and technologies.

There's much under way to make 3-D product data, previously the sole domain of CAD jockeys and engineers, accessible to a wider audience. Ongoing advances in visualization tools, along with highly optimized data compression and rendering technologies, are allowing dispersed product development teams representing different areas of the business to tap into 3-D product data and share it effectively over the Internet. Take PTC's just-released ProductView(TM) 9.1, for example. It has been rewritten with a whole new graphics' and data compression engine that can squeeze massive CAD models down to around 98 percent of their original size so 3-D content like large-scale aircraft assemblies can be easily sent around the globe for more effective design collaboration.

The emergence and adoption of open file formats like Siemens PLM Software's JT Open and new collaboration platforms like Dassault Systemes' 3DVIA are also changing the way 3-D data is shared. "CAD designers have typically had a stranglehold on 3-D information, but there's a need in business to expand that information out to all consumers," says Eric Sterling, vice president, enterprise product marketing for Siemens PLM Software.

3DVIA and its suite of existing and forthcoming tools is all about making the 3-D experience accessible to everyone from engineers to marketers, even customers, according to Lynne Wilson, 3DVIA's CEO. With 3DVIA Composer, for example, companies are creating 3-D documentation and training materials, which deliver a much more intuitive forum for conveying information. Companies can also engage customers using 3DVIA and other 3-D virtual worlds like Second Life to get feedback on the styling of a cell phone, for example, or the ergonomics of button placement on a camera before they build a prototype, let alone a finished product. "The more raw input you can get about what's important to customers and how to innovate, the more you can reduce design cycles and get products to market quickly," Wilson says. "These 3-D technologies help you fail fast and get to the right idea more quickly."

Richer Simulation Earlier on in the Process

Getting to the right idea more quickly is also the key driver behind advancements happening on the simulation front. There continues to be significant user interface enhancements that make hard-core analysis functionality such as CFD (Computational Fluid Dynamics) and FEA (Finite Element Analysis) more accessible to non-simulation experts. Vendors like PTC, Siemens PLM Software, Dassault and Autodesk(R) continue to add analysis features directly into their MCAD environments, with the vision of creating an integrated development system. In addition, analysis vendors like ANSYS, SIMULIA and others are blending the different types of simulation functionality into multidisciplinary suites as opposed to serving up separate, albeit, loosely linked products.

Hardware vendors are also having a hand in making richer simulation a reality earlier on in the development process. There are ongoing leaps forward in affordable high performance computing (HPC) technology, with 64-bit desktop or workgroup clusters continually evolving. Along with new entrants from Hewlett-Packard Co. and Silicon Graphics Inc., supercomputer company Cray Inc. recently jumped into the HPC fray. In September, Cray teamed up with Microsoft Corp. to offer the first Windows-based HPC unit, the new CX1, which starts at $25,000 and runs the Windows HPC Server 2008 operating system.

Building on the first iteration of the CX1, Cray plans to continue to push the price/performance curve. The company is working with NVIDIA to incorporate its Tesla GPU Computing System into the CX1, along with Intel's next-generation Nehalem, according to Ian Miller, Cray's senior vice president of marketing and sales.

Integration of disciplines is helping shape another forthcoming trend in design tools - designing for mechatronics. Reflecting the makeup of today's products, be it cars or washing machines, design tools vendors are beginning to blend capabilities for designing and testing mechanical, electrical and software development components into the same toolset. According to an upcoming Aberdeen report, last year, 91 percent of products had a mechanical component, 82 percent had an electrical component and 66 percent had some form of embedded systems. The complexity of this kind of product design requires engineers to explore the relationships between these systems prior to building prototypes, but traditionally each discipline has been designed and built using a separate toolset. As a result, designs only come together when it's late in the game and far too costly to make changes. For its part, PTC has added the ECAD-MCAD Collaboration Extension to the Pro/ENGINEER suite to address this challenge and plans further developments, while a piece of Siemens PLM Software's Archimedes project, its next-generation roadmap for integrating the PLM software with the Siemens control and automation product line, is centered around mechatronics advancements.

All of these efforts aim to bring previously isolated domains together and attempt to advance the promise of designing, testing and prototyping highly complex products in a virtual world. "Up until the last couple of years, we've been unable to bring together the different disciplines except by prototyping with physical devices," says CIMdata Senior Consultant John MacKrell. "Being able to do all this virtually is really important for streamlining and increasing the speed of design."