Virgin Says Hyperloop Will Be the Best Mode of Transportation 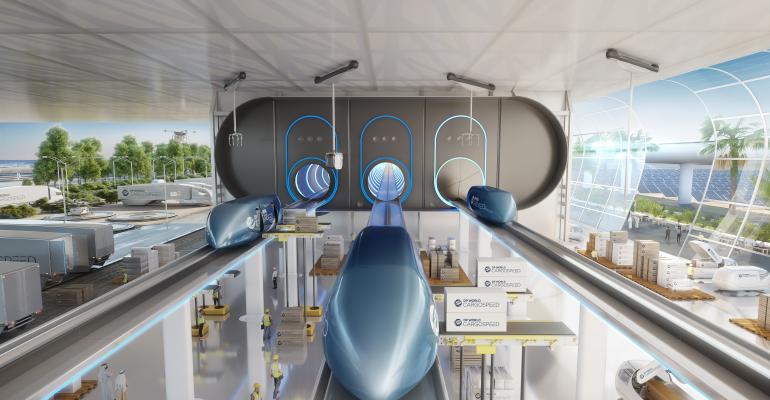 It hasn't even been mass deployed yet, but Virgin Hyperloop One is pitching its technology as the world's most efficient mode of transportation.

Virgin Hyperloop One (VHO) believes it is sitting on the world's most efficient mode of transportation. The prediction came as the Los Angeles-based company also announced it is joining the Ellen MacArthur Foundation's CE [Circular Economy] 100 Network. The charity organization is dedicated to bringing public and private groups together in the name of accelerating innovations that will facilitate a circular economy – meaning one in which sustainability, recycling, and reduced waste are the norm.

In a press statement, Virgin Group founder Sir Richard Branson said that innovations like the hyperloop are going to be necessary to drive toward a more sustainable fufure while still meeting increasing demands for transportation. “The only way to address this mounting crisis is head-on,” Branson said. “We need big ideas like hyperloop to reach zero-emission transport while rapidly connecting people and goods.”

“As the world’s population grows, especially our urban populations, global demands for rapid, seamless travel, and more efficient deliveries will continue to rise. We must meet demand in a way that is efficient, clean, and protects the future of our planet,” Jay Walder, CEO of VHO, added. “Hyperloop technology can be that radical solution, setting the bar for the fastest, most energy-efficient, and sustainable form of travel ever created.”

VHO says its hyperloop technology, which uses magnetic levitation to propel a capsule-like vehicle through a depressurized tube, can transport humans and goods at nearly 700 miles per hour. “It will be able to carry more people than a subway, at airline speeds and with zero direct emissions,” the company said. “By combining an ultra-efficient electric motor, magnetic levitation, and a low-drag environment, the VHO system will be five to 10 times more energy-efficient than an airplane and faster than high-speed rail using less energy.” Further, the company proposes that solar panels can be integrated into the hyperloop's infrastructure to provide for its energy needs.

VHO is currently on a tour across America. The Hyperloop Progress & American Roadshow has been touring major cities across the US to introduce the public to hyperloop technology, specifically the company's XP-1 vehicle. The company also has several hyperloop projects underway across the country. The Dallas-Fort Worth Regional Transportation Council and The Mid-Ohio Regional Planning Commission are conducting active feasibility studies into the environmental impact of the hyperloop and the viability of building hyperloop routes in the Fort Worth area and the Chicago-Columbus-Pittsburgh corridor respectively. VHO also maintains a working test site in Nevada called DevLoop.

Internationally, the company is currently working with the Indian government of Maharashtra on developing a hyperloop route between Pune and Mumbai. “The implementation of a regional VHO system could reduce local greenhouse gas emissions by up to 150,000 tons (300 million pounds) annually while creating 1.8 million new jobs and $36 billion in economic impact across the region,” according to VHO.

The idea of the hyperloop was first proposed by Tesla and SpaceX CEO Elon Musk, circa 2012. Musk's vision was for a new form of transportation that would be immune to weather changes, consume very little energy, never have collisions, store enough energy to operate 24/7, and travel at high speeds (able to travel from Los Angeles to San Francisco in 30 minutes).

The concept was to place pods inside of a tube that contained an array of fans. The fans would create a partial vacuum within the tube, allowing the pods to be propelled (via wheels, air pressure, electromagnetic propulsion, or some other means) through the tube at high speeds. Enthusiasts believe the hyperloop could one day obtain supersonic speeds.

In 2013 engineers at Tesla and SpaceX released a 57-page white paper detailing an early design concept. That same year Musk announced he was open-sourcing the concept so that other companies and institutions could iterate on the idea and speed its development. This has led to a small ecosystem of hyperloop companies like VHO, Los Angeles-based Hyperloop Transportation Technologies, and Canadian company Transpod to emerge.

There have also been competitions challenging students and startups to develop their own hyperloop solutions. Design News chronicled the journey of one of those teams – Team rLoop. that created its own hyperloop system entirely via social media collaboration.

The Long Loop Ahead

All of this is not to say that hyperloop technology has a smooth road (or tube) ahead. There have yet to be any tests or deployments on the scale comparable to even a short commercial flight. And there are a lot of questions around the logistics necessary to implement a large-scale hyperloop infrastructure.

The “possibility of technical glitches and the shortage of power restrain the market growth,” the report said. “Other restraints could be that terrain and other natural disasters will act as a major restraint for this market. In addition to this, it is seen that the online services connected with hyperloop will require connection to the pods which might affect the magnetic field within the tube further forming a major obstacle for the implementation process.”