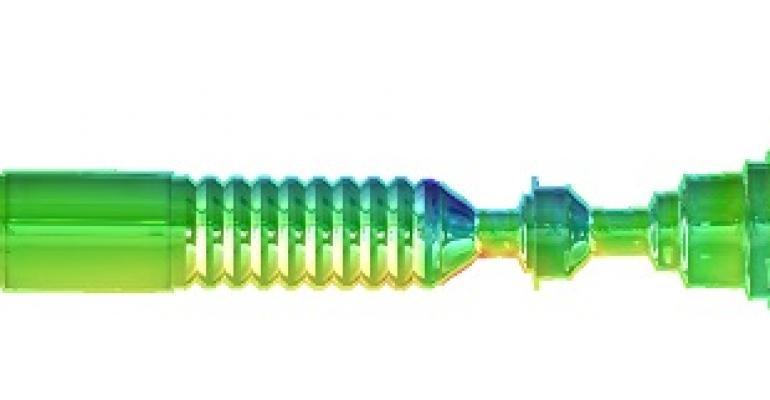 An engineer seeks to discover how a lightsaber is ripped apart and what caused an explosion in the most recent Star Wars movie.

I came from the Rey realm of thought – the Force lets you move things with your mind and control people. Luke and the Force nuns convinced me otherwise, but I still couldn’t turn off my engineering brain as I watched Kylo Ren  and Rey struggle over the lightsaber. How did they rip the lightsaber apart, and why did it cause an explosion?

The only lightsabers I have lying around are LEGO-made, so no physical testing for me. So, I chose the path of finite element analysis (FEA), using a SOLIDWORKS-generated lightsaber and SOLIDWORKS Simulation to test its strength.

SOLIDWORKS Simulation, and other FEA programs in general, need inputs of materials, restraints, loads, and mesh.

The hilt of a lightsaber is usually made of metal, or wood from a Brylark tree. I have run Star Wars analyses before, so I had Durasteel handy in my material library (a custom material I made by modifying AISI 4340 steel). I used this for the casing.

Restraining the lightsaber was a more difficult task. Finite element analysis doesn’t understand the physical reality around the object, and if a model is not properly restrained, even a small imbalance in applied load can cause rigid body motion. Add that requirement to the fact that only the equal yet opposing strengths of Kylo and Rey were preventing Luke’s lightsaber from moving, so I had a conundrum.

Fortunately, once I’d realized the forces (Forces?) were equal and opposite, I knew to activate the inertial relief option within Simulation. This option creates a state of static equilibrium by applying inertial forces at all mesh nodes, and with a final tweak to prevent rotation, I was ready for the next step.

How much weight can Kylo and Rey control? Mostly I’ve seen quarterstaffs and human bodies flying around, but near the end of the movie Rey lifts a wall of boulders. (Yes, I did watch the movie a second time specifically to carefully observe the boulders.) I counted approximately 50 with an average size of 18 in. floating around her. At about 200 lb per 18-in. boulder, we’re looking at a total of 10,000 pounds.

After a quick mesh and run, I got a radial deflection of 0.02 in. inward.

I also got some stress peaks that likely would have fractured the casing, but that still doesn’t explain the explosion. After some research on Star Wars wiki Wookieepedia, I came across a diagram of the internals of Kylo’s lightsaber.

Based on the diagram and the shape of Luke’s lightsaber, we can expect the diatium power cell running through the center of the conductor coil to attach to the Kyber crystal exactly where we see the deflection.

So, my hypthosis: The force applied by Kylo and Rey caused the crystal’s mount to misalign, causing the Kyber crystal to fall into the nearby focusing crystals, ultimately causing a cataclysmic explosion.

Obviously I thoroughly enjoyed The Last Jedi, and I equally enjoyed utlizing SOLIDWORKS to prove my fan theory. So, to all the other fans out there …

May Simulation be with you.

Shivani Patel is an elite-certified Application Engineer specializing in the SOLIDWORKS and Simulation products. She graduated from the University of Texas at Arlington's Aerospace Engineering program, and now works for GoEngineer in Houston, TX. She enjoys seeing how customers apply FEA and CFD tools, and teaching customized classes.