HomeAutomationTestbed Pushes Forward on Time-Sensitive Networking
Recent
Automation
Q&A With IndyCar Gearbox Expert Anna Chatten
May 13, 2022
Intel Unveils Trust Authority to Boost Security
May 13, 2022
Supplier News Looks at Highly Customizable Industrial Monitors
May 12, 2022
Here Technologies Maps are Key to Mercedes Level 3 Automation
May 12, 2022
POLL
'We Built the Domino's Pizza Tracker for Manufacturing'
May 12, 2022
Break Your Bubble Gum Habit by Watching Its Production
May 12, 2022
This Patch Monitors All Your Vitals, Including Blood Pressure
May 12, 2022
First E-Skin to Anticipate, Perceive Touch from All Directions
May 12, 2022 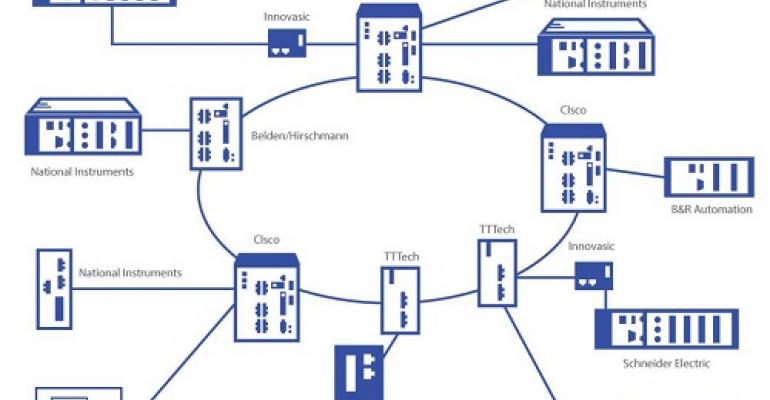 Driven by an overarching goal of interoperability for machine and automation control components, one of the biggest trends in automation and control for 2017 is the emergence of Time-Sensitive Networking technology.

Driven by an overarching goal of interoperability for machine and automation control components, one of the biggest trends in automation and control for 2017 is the emergence of Time-Sensitive Networking (TSN) technology. This is a story that we will continue to follow as it unfolds because of its far-reaching impact on how automation and motion controllers could be evolving moving forward.

In a new testbed report on the Industrial Internet Consortium website, titled “Results, Insights and Best Practices from IIC Testbeds: Time-Sensitive Networking Testbed,” the working group reports on its progress with testing of early prototypes that have implemented TSN.  A group of a dozen or so leading automation and control suppliers announced late in 2016 that they intend to support the developing TSN standards, and developing new products based on the technology.  Suppliers are working in conjunction with both the Industrial Internet Consortium and the AVnu Alliance, and pledged allegiance to the goal of developing product solutions based on this technology including as TSN Testbed partners currently focused on the technical aspects of technical development.

For those not familiar with TSN, two of the key benefits it aims to provide is an approach that uses standard, unmodified Ethernet for control networking, and the ability to provide interoperability between components and systems operating on the network.

According to the IIC report, new integrated technology will address three critical areas that this growing group of automation control suppliers hope will lead to the next generation of automation control networking: time synchronization, traffic flow on the network, and the ability to achieve a centralized system for automatic system configuration.

These three key capabilities form the core of TSN:
1.    Time synchronization: A distributed, precise sense of time is a base requirement for distributed automation and control. It is also a requirement for the deterministic delivery of information needed between the sensors, actuators, controllers that comprise the manufacturing systems, as well as the network infrastructure.
2.    Sending scheduled traffic flows: Based on a precise sense of time, network infrastructure must be capable of forwarding critical automation and control traffic on a timely basis. This is considered an enhancement to the quality-of-service capabilities in most network infrastructures.
3.    Central, automated system configuration: Recently, a key trend in networking has been software-defined networking which enables automated, easier configuration. Software-defined networking is particularly important for TSN in manufacturing because it consolidates application requirements, develops paths and schedules for the traffic flows and distributes that to the relevant network infrastructure.

At this time, the group reports that a wide variety of vendors have brought in infrastructure, devices, switches and test equipment to conduct rigorous testing and creating successful demonstrations. A lot of the effort has been focused on getting various parts and types of TSN-enhanced Ethernet components to work together and “interoperate” using standard Ethernet networks.

“Absolutely. It’s a key requirement to be backward compatible. That’s the whole point, it’s the next version of Internet technologies – Ethernet in particular. You can plug in any device and conventional communication will still work and it will co-exist with this critical automation and control traffic that we’ll have going on. That is the key: we are converging this critical control traffic onto a network that is used by a video camera, Voice-over-Internet Protocol (VoIP) phone, or any other TCP/UDP (User Datagram Protocol) device that you may find in the manufacturing facility. It is by no means required to be a TSN device to connect, but clearly the devices that are TSN capable will benefit from more deterministic service.”

The testbed team decided from the beginning this would not be a short-term project and simple provide a proof of concept. A fixed location for the testbed has established at National Instruments in Austin, Texas, named the NI Industrial IoT Lab, to provide a permanent home for the collaboration.

Specifically, the testbed is looking to influence two Ethernet standards: IEEE 802.1 and IEEE 802.3. All TSN testbed work is filtered to Avnu, a standards organization developing the interoperability and certification based on IEEE’s TSN. And through Avnu, it is channeled back into IEEE (Institute of Electrical and Electronics Engineers).

The initial goal of the testbed team is getting the base technology working and interoperable, but the next step will be development of application protocols. The group reports that one surprise is that the testbed could scale rather quickly because of the size and breadth of the growing IIC ecosystem.

Within the next year, there is anticipation that the first standard control products using TSN will be in the marketplace, although the actual timeline is unknown at this point. The potential of the technology, especially as it serves along with OPC UA as growing standards influencing IIoT and Industrie 4.0 solutions, is continuing to generate a very broad range of industry support even though first products are still not yet released.