HomeAutomationTech Disruptors from the Anaheim Show: The Robot Enters the Body
Recent
Automation
Mercedes-Benz Sustaineer Concept Electric Van Scrubs the Air While it Drives
Oct 28, 2021
Spooky Halloween Tech Is Here. Just Look at These Doozies
Oct 27, 2021
Halloween? What a Perfect Time to Think About Generating Electricity From Blood!
Oct 27, 2021
Ghosts of Medtech: What Ever Happened to These 7 Medical Devices?
Oct 27, 2021
POLL
How to Survive a Zombie Apocalypse
Oct 27, 2021
America's Supply Chain Crisis by the Numbers
Oct 27, 2021
Want Scary Stuff for Halloween? Check out the Tech for 2021
Oct 27, 2021
How Apple Influenced Medical Packaging
Oct 27, 2021

Tech Disruptors from the Anaheim Show: The Robot Enters the Body 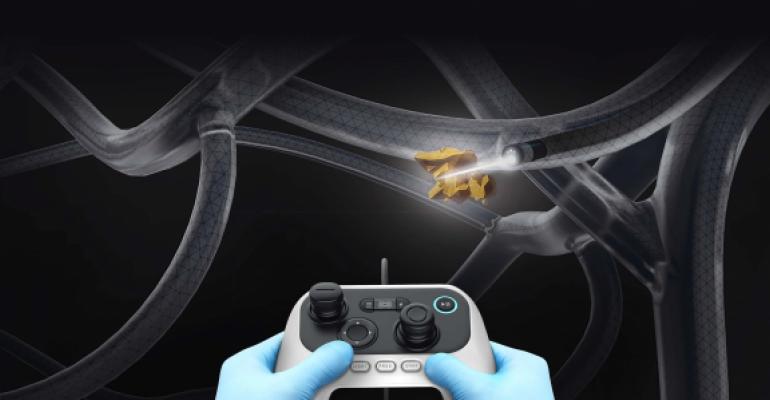 Auris Health has developed a robotics system that enters the lung to diagnose a variety of issues. The sensors enter through natural openings in the body.

Noonan noted that patient care is no longer pre-determined by the limitations of traditional tools. Auris Health creates platforms designed to enhance physician capabilities. “The goal is to use minimally invasive techniques that create new categories of care that can redefine optimal patient outcomes,” said Noonan. “We provide the ability to reach parts of the lung we couldn’t reach before.”

Getting the sensors in the lung is one challenge. Navigating through the lung is even more of a challenge. “You need three hands to manipulate the tool. We solve this issue through robotics,” said Noonan. “The ability to provide the control is the true innovation. A five-year-old can manipulate it in our test system.”

Once the robotics system’s sensors enter the lung, operators can use them for diagnosis. Auris Health, however, sees possibilities beyond observation. “Our patients come in with a suspicious nodule in the lung, and the robot goes through the lung to find it. We’re looking to find the structure of the air paths. It gives us an estimate of where the issue is,” said Noonan. “Yet, we want this technology to go beyond diagnosis. We want it to treat patients. We’ll be there in three to five years.”

Can the Robot Run the Operation?

To push the technology further, Auris Health has developed autonomous navigation for the automated system. “On the robotics side, we have the technology for self-driving, but we don’t have applications for it yet,” said Noonan. “The doctors are not yet willing to let the robot do it by itself.”

The approval process for putting technology into the human body is rigorous. Medical technology companies obtain their certifications process-by-process. “There are a number of obstacles to getting a robot in a surgical theatre. You have to define what the system needs to do,” said Noonan. “You can build a prototype that does cool stuff but taking what works once into a production system is difficult. You have to track everything that is going on in the background in order to make sure this is safe. The approval for the hardware is a long process.”

Connecting the Actual to the Virtual

When working with robotics in the lung, Auris Health uses of blend of vision in the real lung with a digital twin of the lung. “We use the camera view and segment it with the virtual segmentation of the lung. When we get the camera view, we search the entire virtual lung,” said Noonan. “To get a computation, we do it in the real lung and that’s super hard. We do it on every single frame. If you can do that in real time, you can see it accurately.”

Tracking the lung in real-time while working with a virtual lung requires connectivity that is vulnerable to hacking. “Cybersecurity is something you have to consider,” said Noonan. “We have dedicated security staff who worry about it for us. Being connected is important. It’s the key to the rapid evolution of the product.”

Additional articles from this panel look at the advanced work on robotics by Stryker and NASA’s Jet Propulsion Lab.