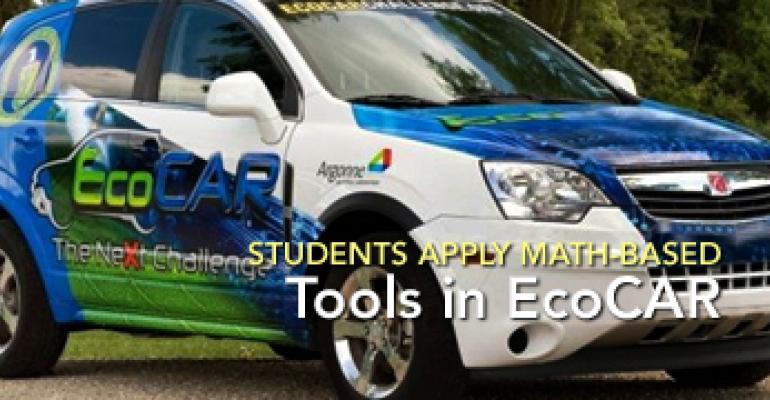 Detroit -- Engineering suppliers are helping student teams build an "EcoCAR" by contributing math-based design tools and software that enable them to create "virtual vehicles" before they ever fabricate a prototype.

At the 2009 SAE World Congress here this week, The MathWorks and National Instruments (NI) said they are donating software and hardware to university-based teams, which will reengineer a 2009 Saturn Vue to reduce its environmental impact while retaining its consumer appeal.

"It's a huge advantage to design the systems in simulation first," said Alexander Koch, a team captain for the University of Waterloo's Alternate Fuels Team. "A few years ago, we would have to have built the ECUs, tied them together with a CAN bus and then see if they worked."

Teams in the EcoCAR Challenge are employing a variety of different software programs to simulate everything from fuel economy tests and emission tests to the process of picking out drive motors and developing electronic controllers. The University of Waterloo's team, for example, is using The MathWorks' SimDriveline to simulate mechanical power systems and SimPower to model electrical power systems. It is also employing SimElectronics for the ECUs and SimScape for multi-domain systems. Along with those programs, the University of Waterloo is also using The MathWorks' MATLAB and Stateflow design environments.

Koch said the simulation tools enabled Waterloo's team to test engines and electric motors, as well as smaller components, such as DC/DC converters and high-voltage buses, on their proposed hydrogen-powered vehicle.

"Think of how much money you can save if you know how a certain engine or electric motor will perform without even building it," Koch said.

National Instruments said student teams are also using its LabView Real-Time Module, CompactRIO controller and PXI PC-based platform to develop such components as CAN buses, camshaft sensors, crankshaft sensors, fuel injectors, headlights and a host of other components. In all, NI said it has donated more than $300,000 worth of hardware and software to the student engineering teams.

The competition, established by the U.S. Department of Energy and General Motors Corp. (GM), includes design teams from 17 universities. The teams are converting the Saturn Vues into four different kinds of alternate fuel vehicles, including extended range electric vehicles, plug-in hybrids, full-function electrics and fuel cell plug-in hybrids. During the three-year competition, students use math-based design tools in the initial year, then built working vehicles in the second and third years.

"These college teams have the opportunity to develop cars the same way GM does," said Paul Mandeltort, a product marketing manager for NI. "They can try out more risky designs than the OEM could do, and they get to test technologies that aren't mainstream yet."