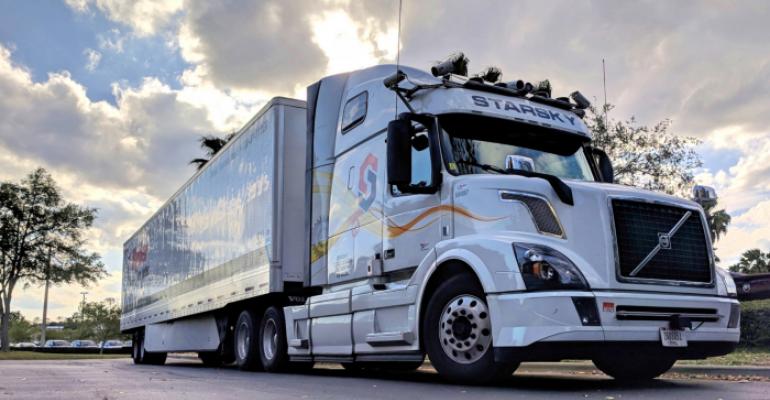 The shutdown of autonomous trucking company Starsky Robotics brings some key takeaways for the state of AI and autonomous vehicles.

Autonomous trucking company Starsky Robotics has closed its doors after failing to secure additional funding in late 2019. Anyone that follows the AI industry or the autonomous vehicle space knows that not every startup was going to make it to the finish line. But the demise of one of the pioneering companies of the autonomous trucking space strikes a particular cord.

Here was a company working on a specific niche case that has gathered interest from both government and private companies, and actually succeeding at it. Starsky took a LiDAR-free approach to autonomous trucking – focusing instead on automotive-grade camera systems and radar. The company made headlines in 2019 when it became the first company to have an autonomous truck drive on a live highway.

And they’re working in the right space. Analysts at Allied Market Research are predicting the self-driving truck market to be worth about $1.7 billion by 2025.

So what went wrong?

In a Medium post, Starsky’s co-founder and CEO, Stefan Seltz-Axmacher, offered his own insights into what led to his company’s fall. More than a reflection on the company itself, the closing of Starsky Robotics is a wake up call on the state of autonomous vehicles and the capabilities of artificial intelligence today.

Here are three key takeaways in the wake of Starsky Robotics shutting down:

AI Is Not Smart Enough

While there is plenty of evidence of autonomous vehicles working in test conditions at most levels up to Level 4, the push toward Level 5 autonomy isn’t happening nearly as fast as was predicted even a few years ago. OEMs, suppliers, and analysts alike are significantly rolling back their predictions on the arrival of fully autonomous cars and trucks that require no human supervision or intervention. Today, the most optimistic estimates put us at 10 or more years out, in part because of the lengthy amount of time that will need to be spent on testing.

The issue, Seltz-Axmacher wrote, is a gap between the expectations of AI versus what it can actually do. “Our approach, I still believe, was the right one but the space was too overwhelmed with the unmet promise of AI to focus on a practical solution,” he wrote. “As those breakthroughs failed to appear, the downpour of investor interest became a drizzle.”

According ton Seltz-Axmacher, supervised learning – a key AI technology behind autonomous vehicles – “simply does not live up to the hype...it isn’t actual artificial intelligence akin to C-3PO, it’s a sophisticated pattern-matching tool.”

Supervised learning happens any time an algorithm or neural network is trained using a preexisting dataset. If you want your AI to be able to recognize cats you feed it a ton of cat pictures. The more data you feed it (the more you “supervise” the AI) the better it will get at recognizing cats.

Autonomous vehicle employ supervised learning on a number of levels, using huge datasets to recognize other vehicles and obstacles on the road (like people and cats). The challenge however is that AI is not very good at dealing with uncommon situations – conditions for which there are not big datasets. These limitations have meant that rather than a Moore’s Law-like exponential increase in AI capability, what we’ve seen instead is an exponential increase in costs to improve AI as companies and institutions work to assemble new and more sophisticated datasets.

Even without Level 5 vehicles on the roads, the general public is already showing concerns over their safety. In a 2019 survey by AAA about 71 percent of US drivers reported that they would be afraid to ride in a fully-autonomous vehicle.

But as big of a concern as safety is for autonomous vehicles, what gets people excited is features.

“The problem is that people are excited by things that happen rarely, like Starsky’s unmanned public road test. Even when it’s negative, a plane crash gets far more reporting than the 100 people who die each day in automotive accidents,” Seltz-Axmacher said, “By definition building safety is building the unexceptional; you’re specifically trying to make a system which works without exception.”

All of that invisible work however does exactly get investors revved up about a company, he added. “Investors expect founders to lie to them — so how are they to believe that the unmanned run we did actually only had a [one] in a million chance of fatality accident? If they don’t know how hard it is to do unmanned, how do they know someone else can’t do it next week?”

This need for safety also compounds with the aforementioned issues around supervised learning. A truck can only be as safe as the AI running it is smart. So, if creating edge case datasets to improve systems cost money, but investors aren’t glittery eyed at making investments in safety over features, you can see where the trouble comes in. If Seltz-Axmacher’s supposition holds true it places companies in a damned if you do, damned if you don’t situation. You can choose to do the right thing and focus on safety and risk being unattractive to investors, or you can focus on cool new features that will get investors to open their wallet – but end up falling short in terms of overall safety and practicality of what you’ve developed.

While autonomous trucks, could help shore up these gaps – doing so also brings social concerns and taps into the ongoing debate of just how much automation will continue to impact jobs. Last summer, the global shipping company, Maersk, faced heavy backlash over an announcement that was introducing driverless cargo carriers to the Port of Los Angeles – a move that could potentially displace hundreds of human dockworkers’ jobs.

Which trucking company wants to be the first to announce it is replacing human drivers with a fleet of self-driving trucks?

Beyond this there are the logistical issues. The trucking industry is also slow at adopting new technologies, according to Seltz-Axmacher. “Trucking companies aren’t great technology customers (you should see what they use), and no one knows how to buy safety-critical on-road robots,” he wrote. “Even if Starsky perfected general autonomy and perfectly validated safety, it would take years to deploy sufficient systems to make the necessary profits.”

The end of Starsky Robotics doesn’t portend an end to the autonomous trucking market. But it should serve as a clear reminder that autonomous vehicles aren’t moving at the breakneck pace they were once predicted to be.

There are still several major companies in the field – including TuSimple, which recently inked a deal with automotive parts supplier ZF to develop new autonomous trucking technologies – including LiDAR, radar, and computing technologies. “Working side-by-side with ZF to refine and integrate our production-ready technology has allowed us to optimize our hardware stack and focus on scaling these technologies to make it possible for autonomous ready trucks to be mass produced,” Chuck Price, Chief Product Officer at TuSimple said in a press statement.

Starsky’s Seltz-Axmacher wrote that his company has already begun selling off assets – including patents related to operating self-driving vehicles – so it is likely that some other company will pick up at least some part of where Starsky left off or leverage Starsky’s work in some way in their own projects.

He believes we’re still a long way from having vehicles that can navigate roads with a level of human equivalency. It’s hard to disagree with him. And if Starsky’s failure in the face of so much success is any indication, we’ll be seeing a lot more companies left on the side of the road as we drive toward Level 5.

“If we showed anything at Starsky, it’s that this is buildable if you religiously focus on getting the person out of the vehicle in limited-use cases,” Seltz-Axmacher wrote. “But it will need to be someone else to realize that vision.”