With Stadia, Is Google Promising More Than the Cloud Can Deliver? 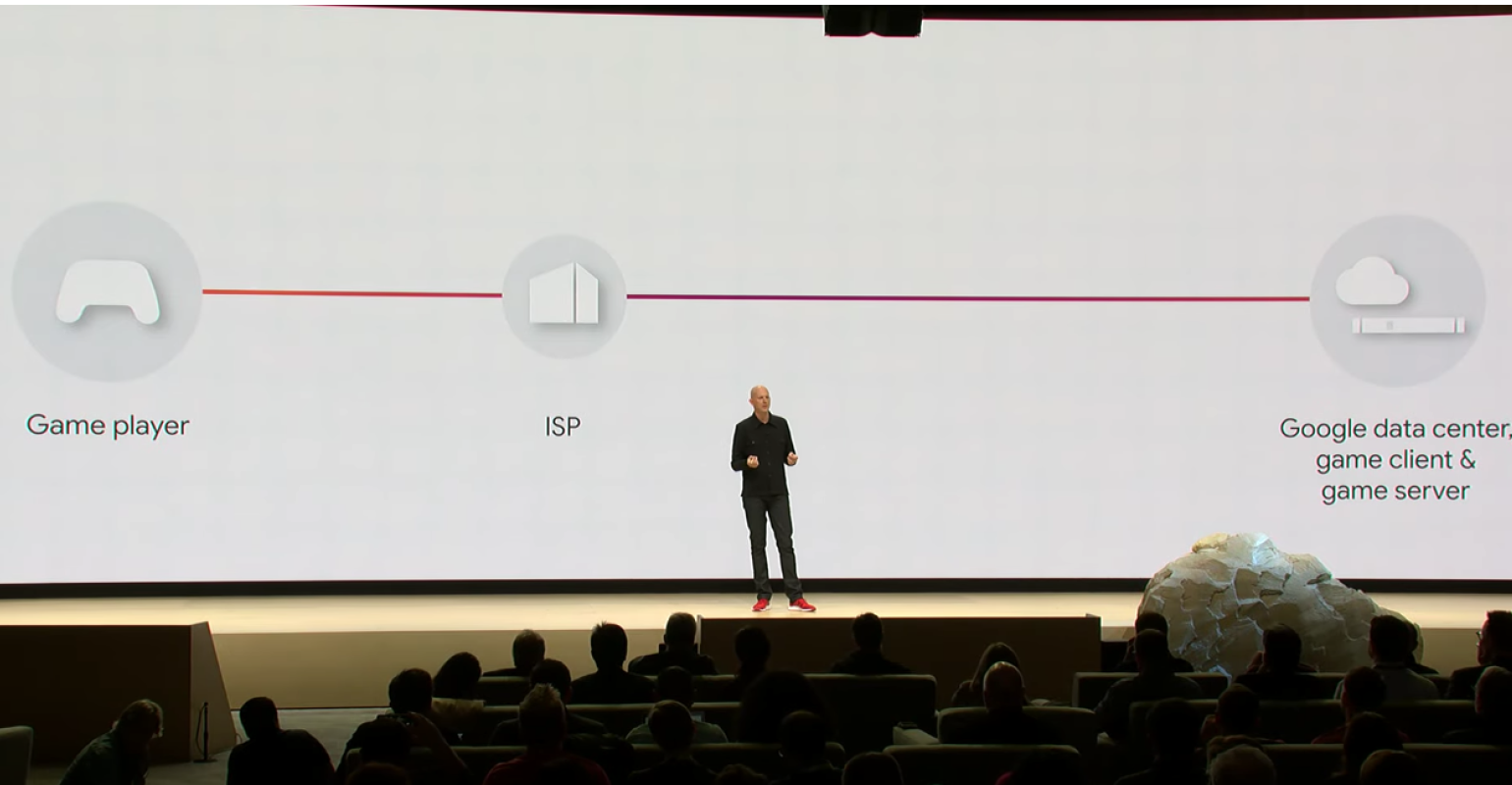 Google's new Stadia service might just be a platform for video game streaming, but it warrants a discussion on the real power of the cloud versus edge computing.

Google's newest service, Stadia, is a cloud-based platform for streaming high-quality games. But is it a sign of cloud computing's bright future, or its limitations?

Google claims it can stream all your high quality video games to any device you own via the cloud. And if you take a step beyond the video game angle, what the search giant is attempting raises some very valid questions about the efficacy of cloud computing going forward.

While a growing trend has seen many companies looking to shift toward edge computing devices for a number of reasons, mainly related to latency and computing power, particularly with AI and machine learning applications, many companies with a vested interest in the cloud (Google, Amazon, and Microsoft come to mind) are continually pushing for more cloud-based services. The argument goes that what you lose in latency you gain in storage savings and access. If cloud computing could eliminate the connectivity issues all together there might be a very strong argument to take all of our processing off of physical devices and into remote data sensors.

At its core that's really the promise behind Google's new cloud-based gaming platform, Stadia. Speaking at the 2019 Game Developers Conference (GDC), where Stadia was announced, Google CEO Sundar Pichai asserted correctly that gaming puts a high demand on computers. Ask any PC gaming enthusiast who knows that the graphics requirements alone of many of the newest games can put a significant strain on all but the highest-end systems. Pichai argued that gaming presents a significant barrier to entry for anyone without a game console or expensive PC.

Stadia is designed to eliminate that by providing gaming experiences entirely through the cloud. In a live keynote at GDC, Google demonstrated how Stadia can stream high-quality games seamlessly to a variety of devices – desktops, laptops, tablets, TVs, and even phones – without any quality loss. The system is also designed to be controller agnostic, letting gamers use any USB controller, mouse, or keyboard...though Google would probably prefer if consumers opt to purchase its purpose-made Stadia controller that features a “capture” button for sharing and saving game videos directly to Google-owned YouTube. The controller itself also connects directly to Google's data centers via a WiFi connection, bypassing your home device entirely.

Google said Stadia is the result of years of internal experimentation through an effort called Project Stream in which the company performed internal testing of its ability to stream high-fidelity graphics over a low-latency network. Because it has so many edge nodes around the globe (7500 according to its own numbers) it means Google can deliver performance to players over shorter distances. In its current form Google says Stadia can stream 4K resolution video at 60 frames per second with only 25Mbps download speeds. 8K resolution is also on the horizon.

Why Not More Than Games?

What Google is promising is a cloud-based gaming experience that is as seamless as a home console or computer experience and offers the same level of graphics quality and performance.

Which begs the question: If Google can do this for high-demand video game applications, can the same thing also be done for Internet of Thing (IoT) applications such as enterprise level product design and smart factory applications? Cloud computing on the level Google is claiming could likely find similar effectiveness in predictive maintenance, data analysis, product lifecycle management, and other IoT applications.

While edge computing is becoming a megatrend in automation, the debate between edge and cloud is far from settled, with some even calling for a mixed solution in the form of “fog computing.”

Speaking with Design News for a separate article, Carrie MacGillivray, VP of IoT and Mobility at market intelligence firm IDC, said, “Computing at the edge enables the distribution of computing across the network. It’s dependent on use cases. Sometimes, the data needs to be processed just on the device and does not need to be transferred back to the cloud. Sometimes, the connectivity only needs to be intermittent, which is helpful when connectivity isn’t always available. What we’re seeing is a hybrid between the edge and cloud computing.”

Sari Germanos, Business Development Manager at B&R Automation, agreed with MacGillivray's sentiment in another interview with Design News. “With edge, you are using fog instead of cloud with a gateway. Edge controllers need things like redundancy and backup, while cloud services do that for you automatically,” Germanos said.

None of this is to say there isn't any skepticism to be had regarding the claims made by Google at GDC. Following the unveiling of Stadia, Andrew Samson, co-founder and CEO of Rainway, a video game streaming service, questioned whether Stadia could perform as promised out in the real world. Rainway offers high-quality game streaming to various devices. but rather than a remote data center it uses a centralized PC in the user's home as its main hub.

“Google misrepresented Project Stream's performance during its beta. Streams for a large majority of users (including our side-by-side test) were locked at 30 FPS and in some cases, the video would be downscaled to 720P,” Samson tweeted. “...The pitch from Google is treating GDC like it is E3. Buzzwords thrown around like teraflops and 8K, things that are at the end of the day irrelevant when the quality of the stream will depend on your connection to the data centers they want you to embrace.”

Sampson also noted that the Stadia controller presents some connectivity questions as well. “Glossing over [the controller's] physically uncomfortable design, the fact it only works over WiFi and doesn't connect to the device you're playing on is asking for higher input latency/dropped inputs.”

Further questions are raised by another video posted on Twitter that suggests that Google's live demonstration at GDC was staged. Upon close examination, the actions of the on-screen character do not seem to match up with the buttons and controls being pressed.

Independent tests conducted by tech analysis firm Digital Foundry however found that Stadia offered 166ms controller latency (the time between when a button is pressed and an action is carried out on-screen), comparable with the Xbox One X game console's 145ms controller latency and remarked that a game played via Stadia feels “very close to a local experience.”

Another Argument for 5G

Whether you believe Google or not. The best answer going forward to enable this type of connectivity will be a widespread rollout of 5G connectivity. Verizon and other companies are beginning rollouts of 5G in American homes this year. At it's full potential 5G will likely be able to deliver on Google's ambitions without issue and perhaps even force a reconsideration of the use of edge computing in factory automation.

5G however is not without its own technical challenges and the technology will certainly have growing pains as it expands into more markets. Range is an inherent issue with 5G, thus requiring the deployment of small cells to ensure proper coverage. There are also concerns around power consumption.

Google made no mention of 5G during its GDC keynote and with the announcement that Stadia is going to be rolling out some time in 2019, clearly the company doesn't think a widespread 5G infrastructure is necessary to deliver on its promise. But anyone paying attention to the IoT landscape knows it's going to take more than Google alone to offer the kind of seamless connectivity consumers will be demanding.

In regards to Stadia, Rainway's Sampson tweeted. “With Google pushing hard how many middleware partners they need for this, it suggests it will not work with most existing solutions, crippling the actual selection of titles.”

And if an audience as large and demanding as gamers is going to have to wait longer for cloud computing to deliver on a promise of high performance, it looks like factories will too.

The Game Developers Conference is produced by UBM, the parent company of Design News.