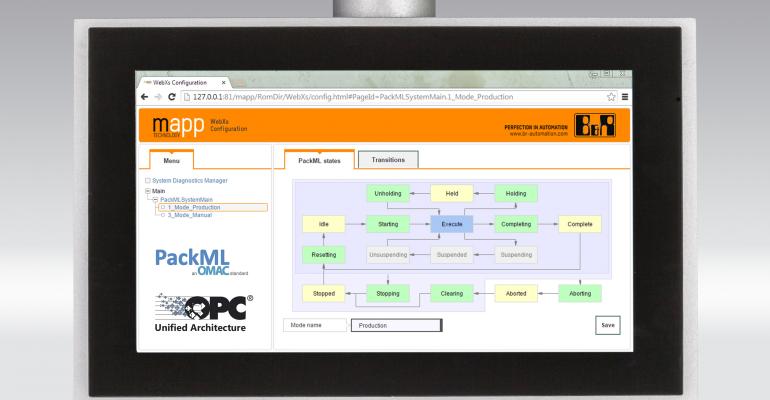 PackML and OPC UA offer an industry-standard approach to data connectivity between machines, as well as MES, ERP, and SCADA systems.

The combination of OPC UA with PackML is moving toward completion, the result of a strategic cooperation between OMAC (Organization for Machine Automation & Control), the OPC Foundation, and PLCopen. As open communications standards proliferate, and the IIoT drives the need to flatten network communication architectures, technology organizations are actively engaged to do just that in automation applications.

Using TR88-00.02 (PackML) provides the advantage of a standard state-based template for defining a machine’s status and behavior, making it easier for system integrators to integrate machines in a line. Combining TR88-00.02 (PackML) with OPC UA provides an industry-standard approach to sharing data securely, and making that data seamlessly available to other machines, as well as MES, ERP, and SCADA systems.

“A standard method for modeling and sharing data, used consistently across the industry, is vital for the implementation of automation standards such as TR88.00.02-2015 (PackML) that will feed data into the IIoT. A companion specification between TR88 and OPC UA will fill this need,” said Dr. Bryan Griffen, OMAC chair and group engineering manager at Nestlé USA.

“We hope to have a final release of the companion specification for this collaboration first quarter 2017,” Thomas Burke, OPC president and executive director told Design News. “One of the most exciting things about announcing this working group was the volume of companies that quickly engaged to participate in this working group (over 50 companies) and initiative driven by end users Nestlé and Arla Foods.”

This cooperation is part of a larger initiative that saw OMAC, the OPC Foundation, and PLCopen exhibit together for the first time at PACK EXPO 2016. PLCopen worked with OPC to define a set of IEC 61131-3-compliant Function Blocks providing OPC UA client functionality and mapping the IEC 61131-3 software model to the OPC UA information model. The latest version was released in 2016.

Since most automation controllers support the IEC languages, it makes sense for the three organizations to get together and avoid redundant developments. OMAC has for many years recognized IEC 61131-3 as the preferred programming language standard in its Packaging Guidelines document. At the same time, it’s clear that standards are needed to support communications from the plant floor up to the interface standards that will be established for big data analytics as well as those de facto interfaces that are in place today.

OMAC, the OPC Foundation, and PLCopen are well-positioned to serve in this capacity, working alongside organizations like the Industrial Internet Consortium, which recently launched a Smart Factory Task Group. Common traits among these organizations are consistent adherence to international standards and a hands-on approach, which the Smart Factory Task Group seeks to define as building blocks for IIoT architecture requirements specific to automated manufacturing.

“While much of the IIoT talk has been about Big Data in the cloud, the fact is that good data starts at the machine and production line level. That’s where the two organizations had been working in parallel,” said John Kowal, business development director for B&R Industrial Automation Corp., a member of the OMAC board and co-chair of the Industrial Internet Consortium’s Smart Factory Task Group.

In 2015, OMAC and OPC Foundation signed a Memorandum of Understanding to proliferate communications standards necessary for the Industrial Internet of Things (IIoT) to succeed.

TR88 does not, however, specify a communications protocol and that is where OPC UA comes in. In spring of 2016, Sari Germanos, open automation manager for B&R Industrial Automation, volunteered to organize a task group of OMAC and OPC Foundation members to develop a companion specification for TR88 and OPC UA by the end of the year.

Burke said that “the value of our organizations’ collaboration will be to provide simple building blocks for suppliers facilitating seamless interoperability for the end users. In this world of continual technology advancement, working together the organizations will allow legacy systems to be easily integrated with systems of the future, which is the key to the Internet of everything.”

“The combination of OPCF, OMAC, and PLCopen promises transparent communication ‘right out of the box’ and independent from network architecture and protocol, using TR88 tag naming and machine states, providing standardized access between any OPC client and server via a secure channel,” added PLCopen Managing Director Eelco van der Wal.

“With everything being done with the FDA regulations and the need for product traceability, the combination of OPC UA with PackML provides a solution,” said Burke. “We started in August by creating a working group, and thought we would get four or five companies to support the development but ended up with almost a hundred. In November at Pack Expo, they actually did a demonstration with five vendors basically supporting the PackML with OPC UA standard.”

Progress toward the companion spec, announced at a PACK EXPO 2016 press conference in Chicago, will lead toward an anticipated completion in first quarter 2017.

Interested members of either organization are invited to contact Sari Germanos at [email protected]. Information on membership can be obtained at https://opcfoundation.org/members and www.omac.org/membership. As the work develops, the group will issue announcements of scheduled meetings and milestones.