Lab Innovation Based on Toy and Material Handling 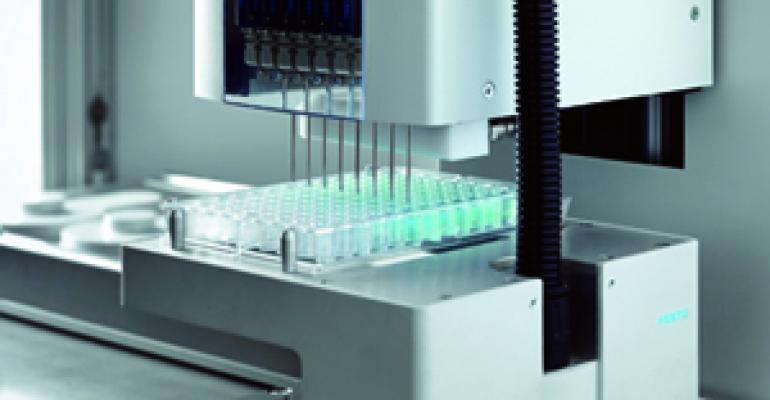 Every square foot in a laboratory costs money. Lab automation OEMs take this into account by designing their equipment to handle smaller sample sizes, increasing the functionality of each piece of equipment, and by reducing the overall footprint of their products as much as possible. When Zinsser Analytical GmbH began developing a new sample handler for collecting fractions (very small chemical samples prepared for liquid chromatography), the company sought out automation design advice to see how small things could be.

The issue Zinsser was looking to address was a need to transfer very small quantities of liquids into 96 or 384 well microplates in a minimum amount of time. To reduce the potential for cross contamination in this process, the platform holding the microplates would be positioned under a non-moving liquid dispense system. This idea differs from the more common industry practice of moving liquid handling arms over the sample plates.

To meet optimum design criteria for this idea, as much of the unit as possible had to be easily accessed from above. In addition, the system needed to occupy a minimum footprint. As for operation specifics, the equipment was also needed to process up to 10 plates automatically. This spec required that a plate stacking system be integrated into the design.

The answer to this new laboratory automation design came from the flat-panel TV handling market. Engineers at Festo, the automation company Zinsser Analytical collaborated with on this design, drew upon a two-axis gantry concept used in a product Festo originally designed for the flat-panel TV handling. The x-y gantry utilizes a single belt driven by two motors in series to control both axes, thereby reducing both size and moving mass. The end result is a product known as the muFRACS.

Functionally, the design concept used in the muFRACS has been around since at least before the Etch-a-Sketch, but Festo took the single belt x-y control design and turned it into a standard automation product.

Mounting the belt to a single point on the stage and driving it via pulleys on the two motors results in the same kinematics as the Etch-a-Sketch toy - when both motors move in the same direction, the slide moves in the x axis; when they rotate against each other, the table moves in the y direction. The design allows both motors to be stationary, thereby simplifying wiring runs, reducing size and mass, and lowering the total number of components needed in the system.

By scaling the unit down to a single extruded plate and designing the motors and controller to fit beneath the extrusion, Festo created a full 4 x 6 inch working area in a package slightly larger than 9 x 10 inch and only 4 inch thick. The compact design of this "Mini H Gantry" allows supply lines for fluids, pressure or vacuum to be made shorter. Motors in the system work in series; doubling their torque output to achieve fast acceleration/deceleration for optimum positioning time while maintaining a positioning accuracy of plus or minus .004 inch.

With the H Gantry as the core of the design, there was plenty of room for the mechanics of the stacking and de-stacking systems using a combination of standard Festo electric and pneumatic actuators under the table.

The design also has promise for other areas of lab automation, as well as in other applications requiring fast, precise x-y control in a small area. Festo has since taken this concept and is developing a full product range of two-axis positioners with working areas of up to 12 x 24 inch, higher precision versions, and with servo or stepper control options.