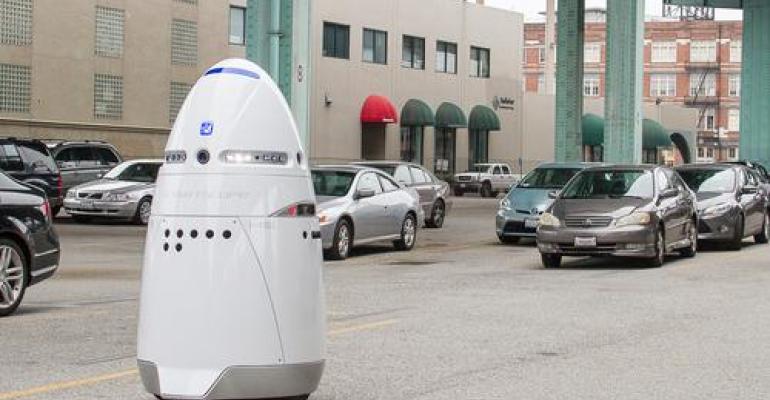 Meet the K5, a security robot conceived in the wack of mass shootings to not only prevent crime but actually predict it as well.

It's not part man, it's all machine, but this robot can still be a cop. Robotics company Knightscope Inc. is rolling out the K5, a security robot that won't just prevent crime, but actually predict it. The company believes the robot's combination of sophisticated sensing technology and social media capabilities can reduce crime by up to 50% in areas where it's deployed.

More R2-D2 than ED-209, the K5 is designed with a sensibility toward drawing people toward it, not away. “When we went through the design process one of the first decisions we made was we wanted this to be an incredibly friendly appearing robot,” Stacy Stephens,Vice President of Marketing and Sales at Knightscope told Design News. “In shape, color, size, and demeanor we wanted people to look at it and be drawn to it, not fear it.” Indeed the robot's egg-shaped frame and smooth white exterior looks like something Apple would rolled off the assembly line – the real-life iRobot.

But packed into the K5's 5-ft-tall, 300-lb frame is a battery of cutting edge sensor technologies, including the ability to detect WMDs using technology similar to what's used in airports. “The [airport detectors] are very sophisticated, extremely expensive sensors,” Stephens said. “We are not using something so expensive, but we're using something with the same capabilities, just less sensitive, and multiplying it times multiple robots in a deployment.”

Stephens said the K5's development stemmed as a reaction to the tragic 2012 Sandy Hook shootings and the 2013 Boston Marathon bombing. “When Sandy Hook occurred you had an entire country up in arms, saying that we needed to protect our kids and there should be a police officer in every single school. Unfortunately that math is not sensible. There are over 138,000 schools in the United States and only 19,000 police agencies.”

The team at Knightscope was seeking a way to use technology to address the issues raised by Sandy Hook when the Boston bombings happened. One notable aspect surrounding the bombing was the degree to which social media and Internet communities rallied around the event – offering everything from up-to-date information, photos, and videos and even trying to identify and help capture the bombing suspects. The influx of information was so much that journalists and law enforcement were having trouble monitoring it all and separating real evidence from fiction. “It was complete pandemonium,” Stephens said. “[But we knew] if we could use the best Silicon Valley has to offer in robotics, autonomous technology, sensors, and social engagement and mash all that together we could be on to something and serve a really good purpose.”

Two years later the company has launched and is beginning testing with the K5 – an “autonomous data machine” that patrols a set, geofenced environment and continuously monitors for suspicious activity and the threat of a possible crime. It's the predictive aspect that Knighscope stresses and which makes the K5 more than just a roving security alarm. “What you have available today is you have some predictive policing abilities and different software that are available, but they all go solely on historical data,” Stephens said. “[Knightscope] can also look at the real-time sensor feeds coming off the robot at the moment and we can tie it into a social media network and monitor within that same geofenced area. Doing this we exponentially increase our ability to predict and prevent crime.”

This social aspect also allows Knightscope to maintain an open and transparent data stream for the general public. “We wanted something that was going to be interactive,” Stephens said. “When something does happen in a public setting we want to open those data feeds to the public. We're not trying to hold into the information or give it to the government. We want people to understand we have full transparency.”

But for those concerned about being accosted by a robot that thinks you “fit the description” its important to note the robot isn't building a Minority Report-style profile on everyone it comes across and doing criminal profiling on them. The way the K5's prediction algorithm works is by looking for anomalies in its environment. Stephens said the simplest way to understand this is to look at the robot's audio sensors. “If you look at audio sensing, most people are trying to drown out all of the ambient noise,” he said. “We're doing the exact opposite. We're interested in all of the sounds that there are and we're able to take a footprint of what [an environment's] sound is like any time in the day or night. Over time you can look at that data and say, 'Oay at two in the morning the normal ambient sound is, say, 65 decibels and at two in the afternoon it's another level.”

Based on historical and real-time data on the ambient sound in an area, a spike above the normal range – say the sort of noise caused by a scream, explosion, or gunshot — could trigger an alert from the robot. “The machine will assign an alert level (green, blue, yellow, orange, or red) that goes to a manned security operations center through our user interface. The center can then call up that particular robot and monitor what's going at that moment.”

The Robots Are Watching You

Any industry that discusses bringing in robots to perform jobs normally done by humans is going to raise questions of job security. Are human security personnel doomed to be fully replaced by automated counterparts? “Unfortunately, security has an abysmal turnover rate in employment. It's near 400%,” Stephens said. “Security is boring, monotonous, very tedious work that few people enjoy doing. There are studies with regards to looking a video feeds and data analysis. And after eight minutes of monitoring video [the guards] have checked out.”

Knightscope's line on the subject echoes the same one given by robotics companies in the manufacturing space – letting the robots do the dull, repetitive, mind-numbing work frees up humans do the complex, stimulating tasks. “If you can take that monotony and give it to the machines and free up the humans to do the strategic work then you have a much higher quality job and someone who's happier,” Stephens said. “You're not replacing security guards, you're just augmenting the way they do business.”

Rather than selling the K5 robots outright, Knightscope operates on a subscription based model that the company says allows for the K5 to operate at a cost of $6.25 an hour per robot. “We feel like this is something that will benefit society, so you don't want to put premium pricing on that. You want it to be affordable,” he said. By contrast, according to 2013 numbers from the Bureau of Labor Statistics a human security guard earns a mean hourly wage of $13.24.

However the number of robots needed to cover a given area can vary depending on a variety of factors including lines of sight and overall safety. “What you don't want to do is deploy just one robot. Just like certain neighborhoods you don't want just one cop in a car,” Stephens said. The robots operating within a given area form a network and maintain communication with each other. This way if one senses a possible threat, or is tampered with, another robot can come in and assist with covering the area. With open and direct lines of sight Knightscope estimates that a single K5 can cover 300,000-500,000 square feet.

Current plans for 2015 involve launching the K5 in Silicon Valley and Bay Area California to assist with parking enforcement and to get many more successfully deployed in private security, parking lots, corporate campuses, and universities across the nation.

Asked how the general public might respond to a robot watching them and even scanning their license plates Stephens said he believes any privacy concerns will be mediated by the benefits offered by the K5. After all, security cameras are already practically everywhere and anyone who's ever received a traffic ticket in the mail is already familiar with license plate recognition technology. “Every bit of [technology] is already being used, we just have different application of it,” Stephens said. “People are not really scared of the privacy loss really as much as they are of taking their family into a theater and getting shot at.”