FreeMove turns any industrial robot into a cobot 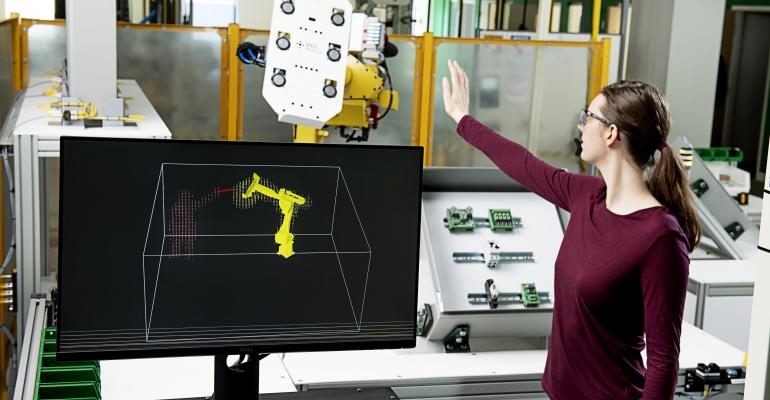 Don't get rid of your old industrial robot yet. You may be able to upgrade it into a collaborative robot.

A big part of the move to smart manufacturing and Industry 4.0 is the implementation of more collaborative robots (or cobots) – machines that can safely work alongside humans without the need to be placed in cages or barriers. Most major robotics companies (and a number of startups) offer cobots today. But one of the big obstacles, particularly for smaller factories, is the cost of implementing collaborative machines.

Veo Robotics is going after that pain point, and working to make industrial robots safer, with a new sensor platform called FreeMove. The FreeMove system consists of an array of four sensors that can be mounted onto an industrial robot's workcell. Using an external processing engine and software suite, FreeMove bestows any robot with spatial awareness to avoid people and obstacles around it. The company says its engine maps and classifies workspaces in real time, performing “Speed & Separation Monitoring” in accordance with ISO/TS 15066 and ISO 10218 standards

Once installed, FreeMove will instruct a robot to slow down or pause when a human or unrecognized object gets too close until the person is at a safe distance again. But this goes beyond simple proximity detection. Veo's computer vision system can monitor movement to predict where a person might end up as they go about their work. This means a robot using FreeMove can anticipate a potential accident rather than passively waiting and simply reacting on the fly.

The biggest draw for FreeMove is that it is a robot agnostic system – meaning it can be implemented into machines already on the factory floor. Veo Robotics has said it partnered with major robotics companies, including ABB, Fanuc, Kuka, and Yaskawa, in the development of FreeMove.

“The FreeMove Sensors are custom dual-channel, 3D time-of-flight sensors with active IR illumination,” Sobalvarro said. “Four to eight sensors are mounted on the workcell periphery to cover the volume of the safeguarded space. With dual-channel architecture, they can be part of a safety certified solution.”

Sobalvarro said that the number of sensors and their placement can vary from robot models. The sensor placement “is a function of the cell size and the level of complexity and 'clutter' in the workcell,” he said. “More complicated workcells would require more sensors, and the Veo system can support up to eight. One could imagine simple applications where fewer than four sensors could be used, but our system ships with four, and we recommend users install a minimum of four.”

Those sensors then connect to the FreeMove engine, an external compute platform that is responsible for processing image data from the sensors and implementing the algorithms necessary for the robot to monitor its surroundings and operate safely.

“The FreeMove Engine is CPU-based,” Sobalvarro said. “GPUs are powerful parallel processors, and we used them in early development, but the failure rate information and lifetime availability of the devices made them an inappropriate choice for this environment. We use Intel server-class processors in a dual-motherboard configuration for redundancy.”

Adding this sort of middleman into the compute process does raise concerns about latency. Sobalvarro acknowledges this, but said it can be accounted for. “Indeed, there is latency from the Veo sensor capture and system processing time, which is currently 100 milliseconds and has to be accounted for in the protective separation distance calculation,” he said. “Of course, there are other latencies, such as robot controller latencies and robot inertia, which, depending on the controller and robot combination, can be material.”

Potential cost savings aside. How do robots outfitted with FreeMove perform in comparison to ready-made or purpose-built cobots? For Sobalvarro and the FreeMove team the advantage is less about outperforming existing cobots and more about leveraging the strengths of industrial robots and bringing them into a collaborative space. The aim is to marry the dexterity and judgment advantages of purpose-built cobots with the power and speed of industrial machines.

“Power and force limited robots (PFL), also known as 'collaborative robots' are considered safe to work near humans because they stop on human contact,” Sobalvarro explained. “However, this imposes two limitations on PFL robots—first, they must be small, weak, and slow, and most industrial robot applications require longer reach, larger payloads, and speed. Second, a PFL robot whose end effector or payload is itself dangerous—for example, a sharp piece of metal—must still be caged or guarded by some other means.”

The system will also include a software suite, FreeMove Studio, that will allow for custom configurations, sensor data monitoring, and monitoring the health of the robot.

Veo says it plans to submit FreeMove for safety certification in early 2020 and expects to receive final certification by the end of that year. In the meantime the company is offering an application development kit (ADK) for those who would like to get a jump start on developing production applications with FreeMove.

“The ADK is an early release of the FreeMove system for use in controlled settings with redundant safety provisions,” Sobalvarro said. “Working with customers, we've already identified some common application patterns for which we see broad applicability, and our hope is that users will think of new ways to apply the FreeMove system to build applications with flexible human-machine interaction.”