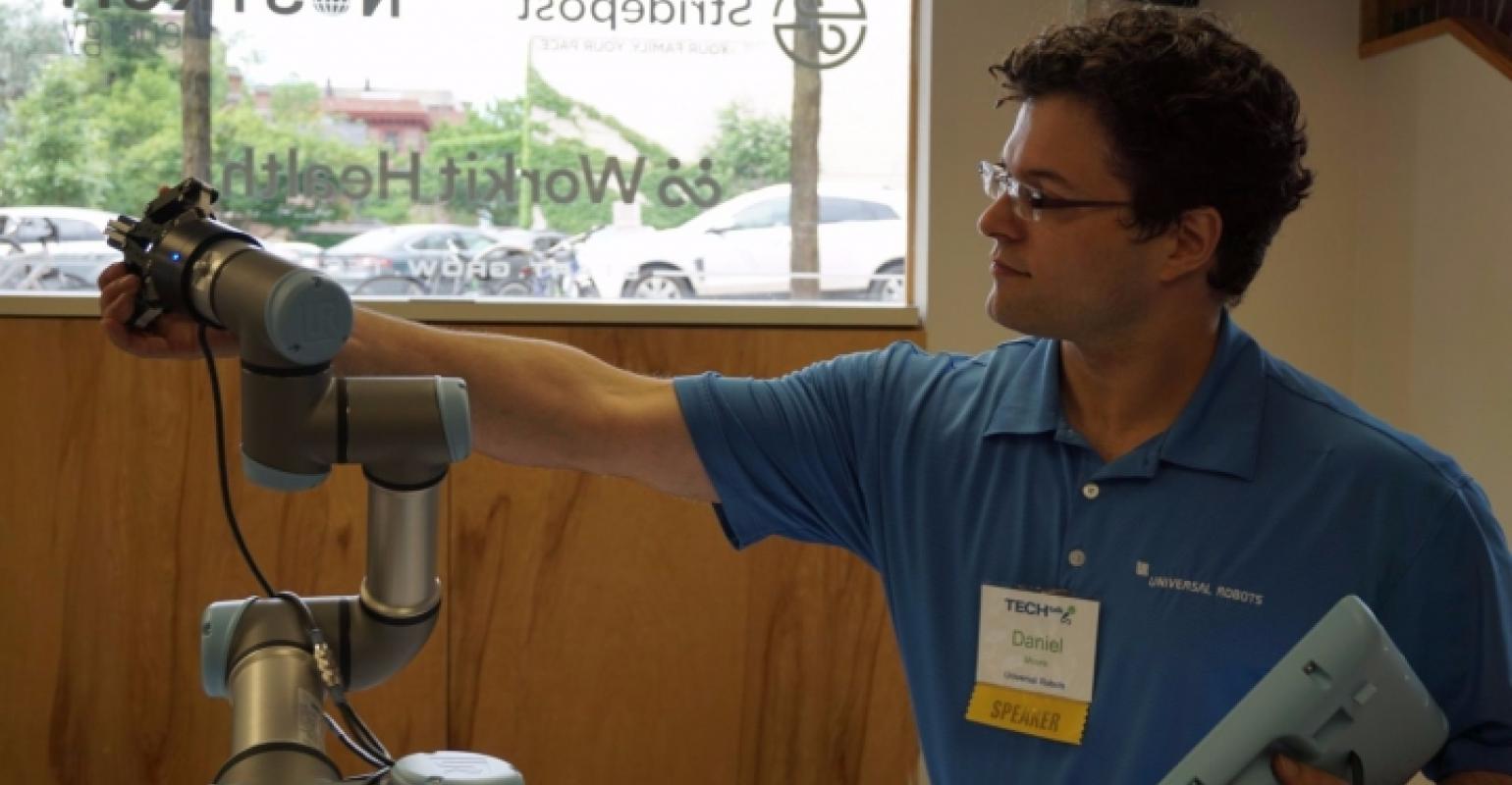 ROI comes quicker to robots that are safe and can be used for a variety of tasks.

A robot that can work on one shift picking parts and another shift loading parts will deliver a quicker ROI than a static robot fixed to one job. Small- and mid-sized enterprises (SMEs) are discovering that smart manufacturing tools are now affordable. This is changing the audience for automation tools such as robots. The new robots can be moved from task to task and they’re safe around human workers. Plus, the cost of the robots and their accessories are now within the financial reach of SMEs.

Daniel Moore, technical support manager at Universal Robots presented the session, Getting the Best ROI from Your Smart Manufacturing Systems at the Advanced Design and Manufacturing Expo in Cleveland earlier this month. During the session, he explained how robots have changed in recent years. They’ve become safer and easier to use, even for SME manufacturers.

The decision to deploy a robot as part of a manufacturer’s automation mix is getting easier to make, especially as skilled workers become harder to find. “The face of automation is changing. Processes are changing, and the employment picture is changing,” said Moore. “There’s a lack of skilled workers. We can’t find the staff. Mix this challenge with global competition and there are incentives to add an extra hand – a robot hand.”

Another change is the cost of robots and the growing variety of tasks a robot can perform. Add these together and you’ll find that a return on investment (ROI) may be easier to reach than it has been in the past. “We moved from automation with long-term ROI to a mix that has quick ROI. The robot does well for six months, but then it gets redeployed for another six months,” said Moore. “So instead of having it do the same thing for two years to get the ROI, the robot changes its duties and thus gets to the ROI more quickly.”

Roaming Free – Safely – from the Cage

Part of the attraction of new robot automation is its accessibility. Robots no longer need their own room. They are now getting designed to play well with humans. “Traditional robots live in a cage with guarding fences and interlocks, and they can be difficult to program. You have to have someone dedicated to the robot or you have to have someone come in to program it,” said Moore. “Now you have robots that are an active tool in the hands of operators. The robot can work within inches of a human. That’s a sea change.”

Configuring robots to be safe around humans is a relatively simple task these days. You can determine limits on the robot’s movements. “You can create no-go areas or areas where it needs to move slowly,” said Moore. “When the robot enters these designated spaces, it becomes more careful. If you try to force the robot through a safety zone, the robot will shut itself off. With pinch functions, the robot becomes more sensitive as it closes the squeeze.”

Instead of needing to be programmed, new robots just need to be configured. Often this is done using a touchscreen “There is a new low barrier to entree and training. Someone on the shop floor can teach the robot. There’s no integration necessary,” said Moore. “The robots are loading and unloading, taking parts off the line, feeding parts onto the line, and the robots will do it at the direction of the site’s workers.”

As the robot is used on the shop floor, new capabilities can be added. Additional vision systems can expand the capabilities of the robot. “You can mount one camera on a robot and it can do two tasks at once with no limit on the number of parts it handles. We try to make this as easy as possible,” said Moore. “With some robot motion instruction, some scripting, and HMI configuration, you have the robot in use within a few days, and any of your employees can use it. You don’t have to have a guru running it.”

One of the attributes that is making robots more attractive to smaller manufacturers is the ability to change the robot’s tasks from shift to shift. “The robot can operate on a booth for eight hours, then you can move it somewhere else. It has 24-hour uptime. Repetitive movement comes with ergonomic problems for human workers,” said Moore. “The robot helps the workers by doing the dangerous and exhausting repetitive movements.”

Is Your Engineering Pay Growing? New Data From the Bureau of Labor Statistics Says Yes
Jul 28, 2021