HomeAutomationFlexible robot grows like a plant to perform in tight spaces
Recent
Automation
Researchers Use AI and Stimulation to Strengthen the Brain
Nov 30, 2021
Carbon-Fiber Composites on a Roll in Auto Wheels
Nov 30, 2021
Our First Drive in the Lucid Air EV
Nov 30, 2021
How to Build a Better Industrial Automation System Using PLCs
Nov 30, 2021
POLL
Getting Started with Cpputest for Embedded Applications
Nov 30, 2021
Opportunities for High-Performance Polymers in the Semiconductor Space
Nov 30, 2021
Meet the Most Comfortable Keyboard on the Planet
Nov 30, 2021
Mobile Plastic-Waste Upcycling Platform a Finalist in World Design Awards
Nov 30, 2021

Flexible robot grows like a plant to perform in tight spaces 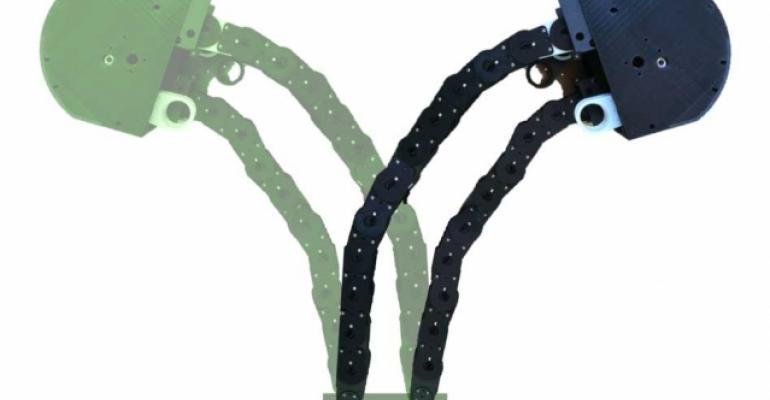 MIT researchers have designed a robot with an arm that is both flexible and strong. It can adapt to complete tasks in tight places.

Scientists increasingly are designing robots that can perform tasks alongside humans and do things that are too dangerous or impossible for humans. One of those tasks is to navigate tight spaces that humans have a hard time navigating.

MIT engineers have designed a robot with an appendage flexible enough to twist and turn in any necessary configuration that also can support heavy loads and apply enough power to put together parts in tight spaces. Once one task is complete, the robot can pull back the arm and extend it again at a different length or shape depending on what the next task demands.

While robots currently being designed to perform similar tasks are typically made of soft materials, the MIT robot is different, said Harry Asada, MIT professor of mechanical engineering in whose lab the robot was designed. Instead, they designed a robot by making a clever use of rigid materials.

That team--led by Tongxi Yan, a former graduate student in Asada’s lab--took inspiration the way plants grow to inform the design of the robotic arm using these materials. Plants transport fluid nutrients to their tips as they grow, then convert them into a solid material to produce a supportive stem. The MIT team mimicked this by designing the appendage in a similar way.

They designed a gearbox to represent the robot’s growing tip, similar to the bud of a plant, which is the part where nutrients flow up and feed a more rigid stem. In the box, researchers built a system of gears and motors which pulls a fluidized material. The material is comprised of 3D-printed plastic units interlocked with each other, similar to a bicycle chain.

The chain feeds into a box and turns around a winch which then sends it through a second set of motors programmed to lock certain units in the chain to neighboring units. This action creates a rigid appendage as it is fed out of the box.

This design and movement allows the robot to function with a combination of flexibility and strength, which is what is needed for some tasks that robots currently aren’t designed to perform, Asada said. “Think about changing the oil in your car,” said Asada. “After you open the engine roof, you have to be flexible enough to make sharp turns, left and right, to get to the oil filter, and then you have to be strong enough to twist the oil filter cap to remove it.”

The team designed the robot perform such tasks, Yan said. “It can grow, retract, and grow again to a different shape, to adapt to its environment, he said.

Researchers presented their work recently at the IEEE International Conference on Intelligent Robots and Systems in Macau. They envision myriad uses for the machine by mounting grippers, cameras, and other sensors onto the robot’s gearbox so it can make repairs in tight spaces on airplanes or find objects in a warehouse on a high shelf without disturbing other objects.