HomeAutomationCritics Question Collaborative Robots after Amazon Bear Spray Accident
Recent
Automation
Argo AI Expands to Austin and Miami in Search of More Challenges
May 18, 2022
12 Ideas that Could Change the World
May 18, 2022
Making the AC Power Main Intelligent
May 18, 2022
How to Make Sure Your Digital Transformation Doesn’t Fail
May 18, 2022
POLL
The Internet's Grooviest Slideshow of Legendary International Scouts
May 17, 2022
Electronics Industry Bolsters Root of Trust Security Efforts
May 17, 2022
3 Tips for Embedded Software Configuration Management
May 17, 2022
Novel 3D Printing Method Used to Replenish Coral Reefs
May 16, 2022 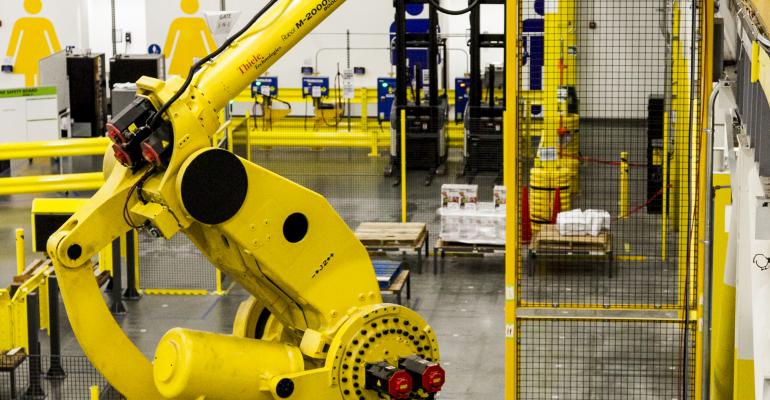 Workers' rights organizations are questioning the safety of collaborative robots in the wake of an incident at an Amazon fulfillment center.

Bear repellent is conveniently sold on Amazon, so you need not leave the comfort of your home to safeguard your campsite. But unfortunately for a group of Amazon warehouse workers, the cans aren’t quite as sturdy as they ought to be, and their robot coworkers aren’t quite as light-fingered as they should be.

Over two dozen Amazon employees at a warehouse in Robbinsville, New Jersey were hospitalized last week when a robot “picker” in the warehouse accidentally punctured an aerosol can of bear spray, spraying the caustic capsaicin on 55 workers in the vicinity. One employee was initially listed as critical, but his condition had improved by the weekend. An Amazon spokesperson said that hundreds of workers are at the facility during a regular shift, and that the release of the caustic substance affected only a portion of the facility's third floor. It was quickly cleared and declared safe by the West Windsor Health Department.

The incident may give more leverage to workers’ rights groups, which claim that it’s unsafe for human warehouse workers to work alongside robots, despite safety protocols. Amazon claims their “robot palletizers” do the most monotonous work, sparing human workers the necessity of doing repetitive tasks and walking long distances. Critics say Amazon should proceed cautiously with the implementation of warehouse robots to ensure that human workers aren’t harmed.

“It’s impossible to say how safe—or unsafe—all of this is,” wrote Justin O’Sullivan, a UK-based safety inspection expert. “On the one hand, with fewer people doing less dangerous jobs, Amazon’s robot-run workplace could cause human injuries to decrease. On the other hand, complacency and over-reliance on machines could make work more dangerous. For a safety inspector at an Amazon warehouse, robot workers pose an interesting problem because—in order to properly risk assess them—they need to be treated as both work equipment and staff members.”

While the event spawned millions of clicks on social media (Wired called it “a perfect horror story for the year of our lord 2018”), workers’ rights organizations were less than amused—particularly by the fact that the accident was caused by a machine and not human error. Not to mention this wasn’t even Amazon’s first robot-meets-bear-repellent accident. In 2015, the fire department in Haslet, Texas responded to an accident at an Amazon warehouse caused by a robot running over a can of bear spray. Media did not report on the incident at the time.

The National Council for Occupational Safety and Health, a labor advocacy group, announced last summer that Amazon had topped its annual “Dirty Dozen” list that outs companies perceived to put workers most at risk due to unsafe labor practices. The group reported that seven workers have been killed at Amazon warehouses since 2013. Though these deaths were not related to collaborative robots, the report said Amazon exhibits "a disturbing pattern of preventable deaths," adding, “Amazon workers suffer injuries—and sometimes lose their lives—in a work environment with a relentless demand to fill orders and close monitoring of employee actions...”

"Today, Amazon put warehouse workers in the hospital—again—and one is fighting for their life in the ICU right now. Amazon's automated robots put humans in life-threatening danger today, the effects of which could be catastrophic and the long-term effects for 80+ workers are unknown,” said Stuart Appelbaum, president of the Retail, Wholesale and Department Store Union (RWDSU), in a statement following the incident. “This is another outrageous example of the company putting profits over the health and safety of their workers, and we cannot stand for this. The richest company in the world cannot continue to be let off the hook for putting hardworking people's lives at risk.”

The working conditions at Amazon fulfillment centers have been a source of widespread criticism for years—so much so that Amazon's warehouses, as well as its CEO Jeff Bezos, have become the subject of the most recent episodes of South Park. A 2012 investigative report by Mother Jones magazine uncovered a grueling, low-paid, and often unsafe work environment where workers, overwhelmed by stringent productivity goals, were prone to fainting and exhaustion.

In 2014, Amazon—in part as a means of addressing these issues—began implementing collaborative robots supplied by now-subsidiary Kiva Systems into its fulfillment centers. The Kiva robots rapidly carry and move shelves throughout its warehouses. The robots move on designated tracks so as to minimize their chances of colliding or interfering with human workers. The palletizer robot involved in the bear spray incident was not a Kiva robot, but was supplied by an unnamed outside company.