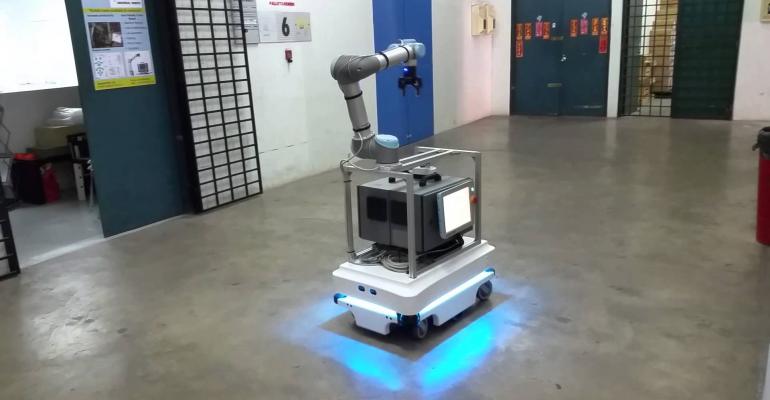 These robots are getting deployed in a wide range of industries to reduce costs and solve workforce issues.

As manufacturers seek greater efficiency through smart manufacturing, one of the tools that is emerging to save costs and mitigate workforce issues is the automated mobile robot (AMR). These machines can move materials across a plant floor or through a warehouse without the aid and direction of a human worker.

According to Zion Market Research, the global autonomous robot market is expected to grow more than 14% between 2017 and 2024. The research company attributes this growth to the increasing demand from industries including automotive, healthcare, electrical, electronics, machinery, food and beverage, and defense.

One of the companies developing AMRs for manufacturing is the Danish firm, MiR. The company is creating robots that perform a number of manufacturing tasks across a wide range of industries. “Efficiency is fueling the growth. AMRs are automating tasks that are dangerous or tasks people don’t want to be doing on a daily basis. The AMRs give companies new efficiencies,” Ed Mullen, VP of Sales at MiR, told Design News. “People are sitting down at a station doing something that’s making money for the company. As soon as that person gets up, the company quits making money.”

The critical idea behind the AMR is the autonomous movement of materials from one place to another. “The concept is to give companies a tool to move materials between processes. In the past, it’s been conveyors, but they’re fixed pieces of equipment,” said Mullen. “Conveyors also take up floor space. AMRs give the companies the agile automation to take a product from here to there with no need for conveyors.”

AMRs on the Manufacturing Floor

MiR points to a number of use cases where AMRs helped bring efficiencies to companies in a variety of industries. For example, Honeywell Analytics in the UK has deployed three mobile robots to help keep manufacturing processes lean and agile by automating the transfer of materials throughout its warehouse.

In recent years, robots have proliferated outside of their traditional home, the automobile factory. Now we’re seeing smaller robots show up across a wide range of industries, and many of those are AMRs. “In the past, mobile robots were predominantly in the auto industry, where it takes a long time to walk something from one place to another,” said Mullen. “What we’re starting to find out is, it’s a square-foot equation, whether they’re sewing curtains or moving tranmissions.”

What Mullen means by the “square-foot equation” is that the robot adds value in proportion to the space it must travel. “Do you have a space large enough that you don’t want someone moving things from one place to another? The amount of space that needs to be traversed with material becomes a viable ROI strategy,” said Mullen. “We have our robots in manufacturing facilities and hospitals. AMRs proliferate on the square-foot model.”

Getting ROI out of the Robot

Robots are usually deployed based on an anticipated and measurable return on investment (ROI). Part of the growth in AMRs is the ability to quantify the ROI. “If we look at existing applications, our average ROI for 2018 was eight months,” said Mullen. “At a $30k price point, we’re one-to-one when compared to the cost of a typical employee on foot.” Mullen notes that the AMRs further prove their value in their ease of use. “We have a user interface that is simple and intuitive to use. You don’t have to be a skilled engineer. That expands the ownership.”

Part of the ease of use includes the ability to quickly redeploy the robot from task to task. “If the points of pickup and drop off change from month-to-month, the employees at the company make the change by themselves,” said Mullen. “They can add a position in five minutes. That’s the key to everything—the flexibility of the product.”