An Army of Robots Is Coming to the Factory Floor 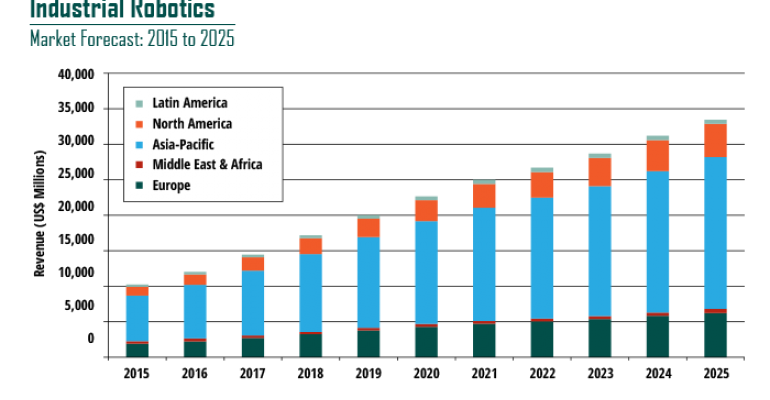 ABI Research forecasts investments in factory robots to grow from less than a billion dollars in 2018 to $22 billion by 2027.

Over the past few years, we’ve seen notable advances in factory robot technology. Along with that, we’ve seen growth in adoption. That growth is about to get much steeper. With the lowering price point of both mobile and fixed-arm robots, this automation tool has become an easier choice for small and mid-size manufacturers. A tight labor market makes robots even more attractive. All of those factors are coalescing into some very aggressive forecasts on robot adoption over the next 10 years.

According to ABI Research, the revenues from commercial robot sales in manufacturing are expected to grow to $22 billion by 2027. This trend includes the full range of complementary robotics technologies including mobile robots on the factory floor. The mobile robot market is made up of automated guided vehicles (AGVs) and autonomous mobile robots (AMRs). The mobile robots complement existing robotic arms that are increasingly becoming more autonomous and smarter.

In its report, Industrial Robots Market Update, ABI points to a number of reasons for the bullish forecast on robot adoption. “There has always been demand for a higher level of automation in many verticals, such as warehousing, manufacturing, agriculture, and healthcare,” Lian Jye, principal analyst at ABI Research, told Design News. “An aging population and increasing workloads make it really difficult for companies to keep up by merely hiring more employees.”

Another reason for the spike in robot adoption is that robots are more capable than in the past. “Robotics technologies have improved significantly in recent years,” said Jye. “One key technology is SLAM, which involves simultaneous localization and mapping. SLAM enables robots to move in unstructured environments without the need of built-in maps.”

SLAM involves swarm intelligence and sensor fusion that make it possible for mobile robots to operate in unstructured environments, such as the factory warehouse and the assembly area. These technologies are being supported by multiple cameras and sensors, such as LiDAR and radar. Robots are also integrating deep learning algorithms with sensor fusion and swarm intelligence.

Manufacturing was the sector that first adopted robots more than four decades ago. All these years later, manufacturing is still the leading sector for robot adoption. “Manufacturing is still the primary sector for industrial robots. That includes the articulated robot with a 6-axis robot arm, SCARA robots, and the delta robot,” said Jye. “Universal Robots produces a collaborative robot with a 6-axis robot arm that has built-in machine vision capabilities, allowing the robot to see and identify objects. The robots can be easily reprogrammed to perform a variety of tasks.”

While mobile robots are often associated with warehouse operations like Amazon, they are also getting deployed in factories. “On the factory floor, mobile robots are deployed mainly for unloading and material handling. They can replace human workers to carry goods and heavy loads across the factory and between different departments,” said Jye. “The applications are still in nascent stage, and the most relevant example is MiR (Mobile Industrial Robot), which happens to belong to the same mother company as Universal Robot.”

While the manufacturing sector may be the leader in robotics, other sectors are beginning to turn to mobile robots for help. “We have identified several industries,” said Jye. “Aside from warehousing, the retail, hospitality, healthcare, agriculture, and food delivery industries are some of those that are very interested in mobile robots.”

Because each vertical has specific needs in robot capability, niche robot plays have appeared to meet the individual needs of each sector. “There are many startups that focus on specific verticals, such as Bossa Nova in retail; Savioke in hospitality; Aethon in healthcare; Abundant Robotics, Small Robot Company, and Naio in agriculture; MiR, Seegrid, Fetch Robotics, IAM Robotics, Locus Robotics, and Omron Adept in warehousing and manufacturing; and lastly Dispatch, Mable, and Starship Technologies in food delivery,” said Jye.